In the tenth of our series of Female Food Founders interviews we look at a producer in the growing area of “free from” and allergy foods.  We first met Sonia Mason Founder of Slightly Different Foods  who have the largest range of FODMAP Friendly accredited sauces developed and manufactured in the UK at the huge Allergy and Free From Show at Olympia in London. Our co-founder, Mecca Ibrahim, chatted with Sonia to discover what FODMAP is,  how Small Business Sunday has helped her and how to scale up from home kitchen to wider distribution. 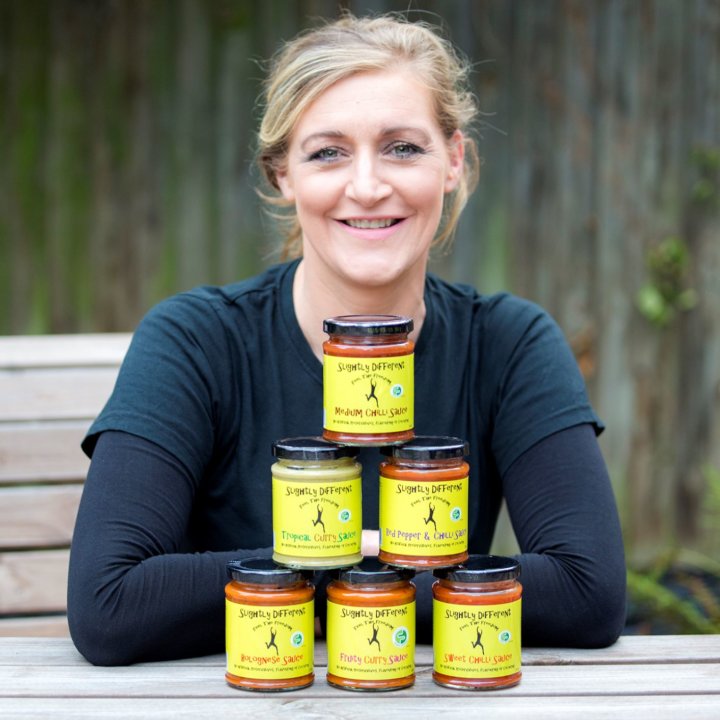 How did you start your business and get into the FODMAP are?

Everything started in 2014 when I was diagnosed with IBS and I started researching the area and I couldn’t find anything in supermarkets, that I could get on with to help with my symptoms. I discovered FODMAP and found there was a niche in the market for it in the UK. Food for IBS first started in Monash University  in Australia. I started with sausages first of all and found an award winning butcher to make my own recipe sausages for me which were gluten-free although not certified low FODMAP at the time. I’d also started to prototype make a number of jams and a bolognese sauce and came out in 2017 with two Free From awards – Bronze for best start up product and Silver for best meat and ready meal.

What happened after winning the awards?

Surprisingly I decided to take a bit of a back seat and  change my strategy. I was working so many hours, and despite getting a great response for my products, I couldn’t keep all the business plates spinning. I decided to stop trading as a sole trader.

However by chance I was in a supermarket and noticed that a larger manufacturer had low FODMAP certified on some of their products. In May 2018 with the support of Simon Fox (my then partner and now husband) we set up Slightly Different Foods Limited. Simon has 25 years experience in the wealth management industry advising individuals, entrepreneurs and businesses. Having run his own business and also being a private investor in start up businesses he manages our business leaving me with the time to develop new products.

We launched the first two products a few months ago and we now have six products which were able to launch at the Free From and Allergy Show. We have a further 3 we are launching in October. 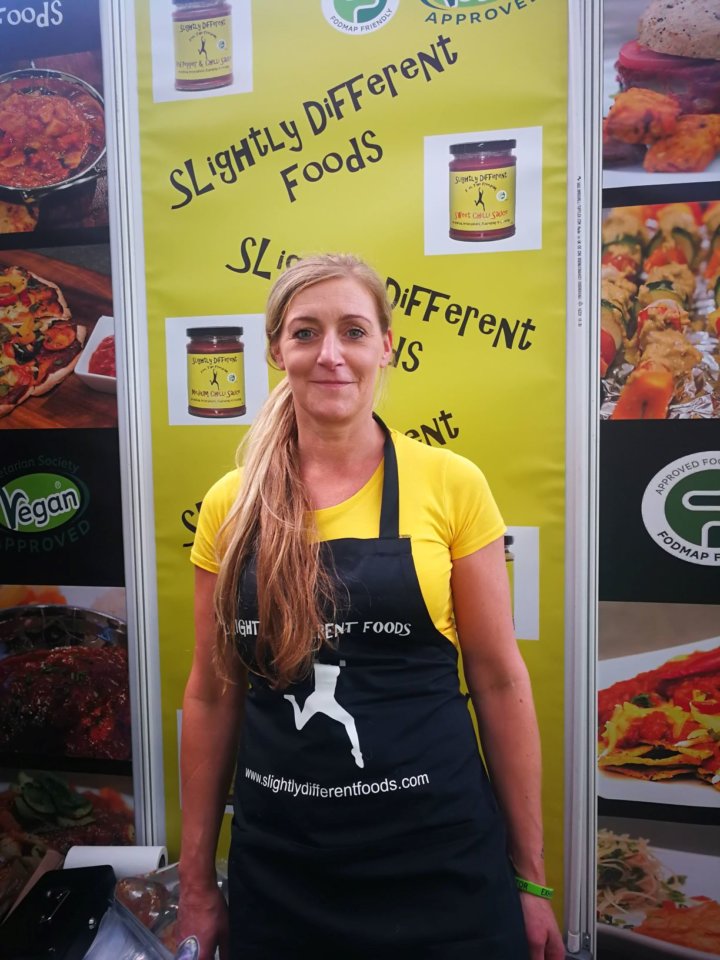 What do you think has led to FODMAP being more recognised or talked about?

Well IBS is not a subject that people really did want to talk about a lot. It’s not just your bowels that get turned upside down with IBS – nausea, sickness, headaches. But it is now becoming more recognised as a major problem and  over 12 million people in the UK alone have IBS. There are a few apps that you can download to find out what foods can help or make your symptoms worse.  But it is all very complex and in the fast paced world we live in many people don’t have time to do so much research & elimination diets. So it’s comforting to know that my products have all been tested and are certified as safe to eat on a FODMAP diet.

You said that The Free From and Allergy show was much more different for you this year than in 2014 when you first launched, could you explain why?

We specifically had people coming to see us and people were relieved that our products are on the market as they were craving things like curries.  Most curries have onions and garlic in them – these both have both contain fructans and should be excluded if you are on a FODMAP diet.  But our products are also vegan approved and allergen free so have a wider appeal. Our products use coconut milk rather than diary which opens the door to a wider audience. 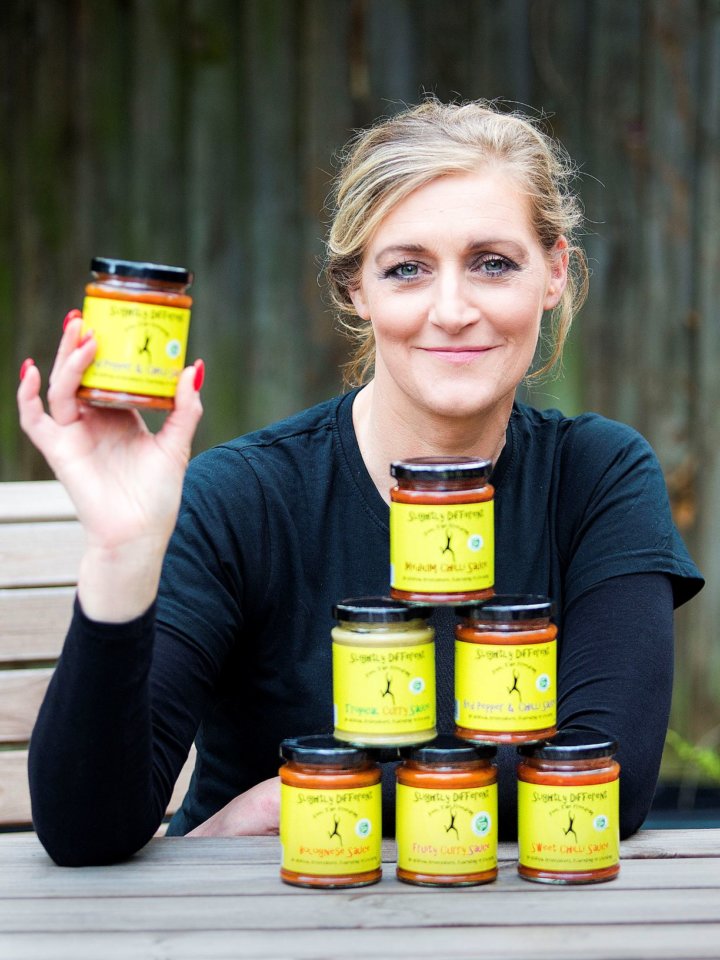 How do you put the word out about your products?

Social media, mainly Twitter has been very good for us.  We also discovered that Theo Paphitis who used to be a regular Dragons Den & is making a return –  has a weekly Twitter competition called SBS – Small Business Sunday where if you tweet him @TheoPaphitis and describe your businesses in one tweet including the all-important hashtag #SBS between 5.00 PM and 7.30 PM he chooses his six favourites every Monday night which he retweets to his half a million followers!  We were lucky enough to be a winner one week and one of our new stockists (who also came to visit us at the Allergy Show) is where she first heard of us.  He also helps out with advice of how to make the most of your win through local papers and we got a lot of local publicity through this too. 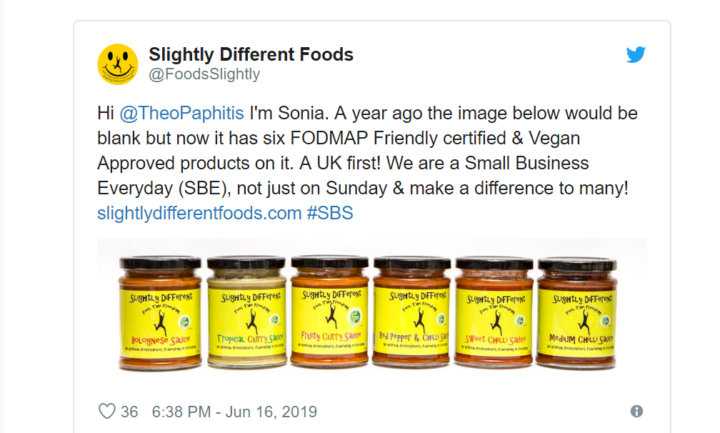 How important is your local area and local advertising to your business and how does this compare to working with Amazon?

We have seven high street retailers and a number of local online stockists and a local wholesaler in Bristol that helps to sell our products throughout the UK.  We also thought it would be a good idea to be on Amazon, so we could sell outside of the local area. Selling locally is great because you get great word of mouth from this as the retailers all talk to each other and help spread the word. 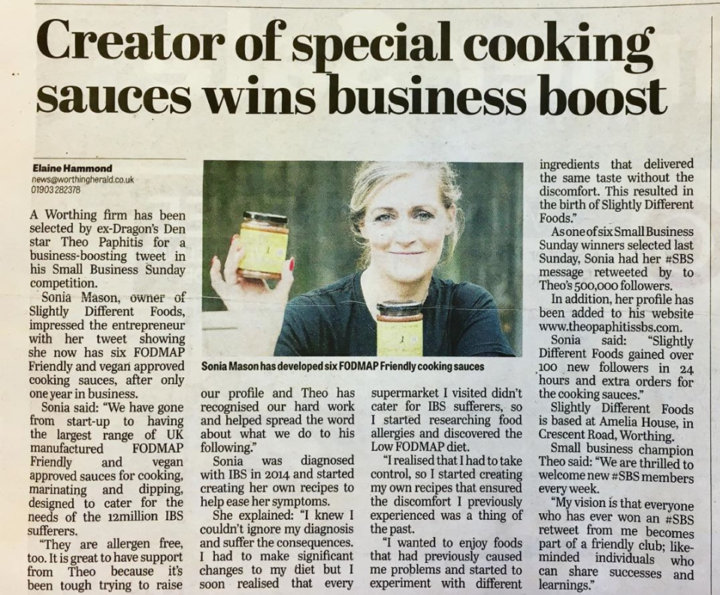 Are you ready to go national yet or what other plans do you have to expand?

This is a dream from most food companies, but you really have to be prepared for the margins that the large supermarkets take.  At the moment I am looking at places like the food services, catering and the NHS and the education sector. I know that those areas struggle to produce some allergy related food at larger scale. We can offer catering sized packs for them. 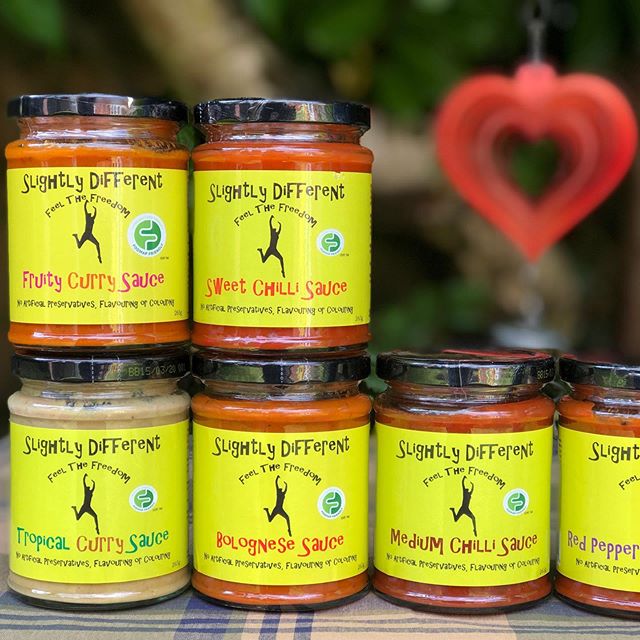 You are on a desert island and there’s one ingredient you can’t live without and what one dish type could you live on forever ?

A chilli would be my ingredient. A few of my recipes have lots of fruit in them but the chilli would help to add a bit of a kick to them. The dish type would have to be a curry as I imagine there would be fruit on this island so I would make a number of curries as a result.

What are some of the advantages (if any) of being a women in the food industry?

I can’t really say that being a woman has really helped or hindered me. I always knew that I wanted to work in food as I had been in the food business and catering for around 20-25  years, so it’s a big passion.  I worked for Brakes, in airport catering units, ran a catering company, childrens’ parties with entertainment and I ran a small chain of fish and chip shops for some time too.  It’s important to have passion for the industry whether you’re male or female. 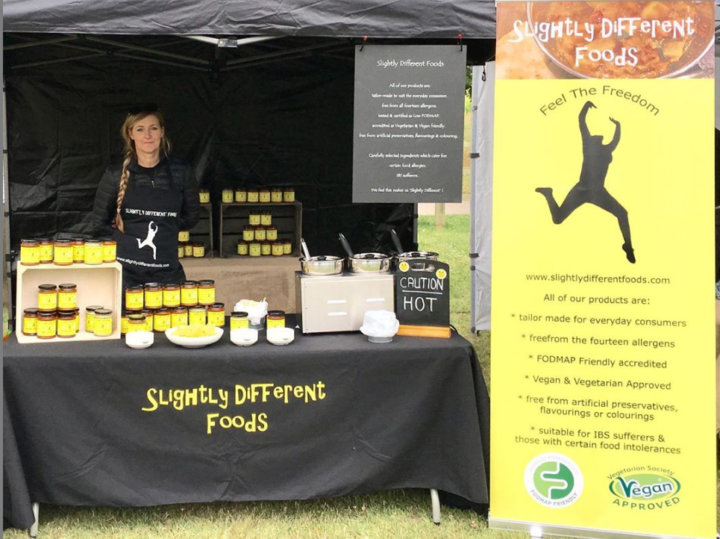 Finally, what’s the biggest piece of advice you could give to someone starting out, or putting it a different way, what do you know now that you wish someone had told you when you were first starting out?

Well renting my own kitchen wasn’t the way to go for me. This was what I had been advised back in 2014.  I had put a lot of money into this professional kitchen and bought a lot of equipment, but I couldn’t keep up with amount of food I needed to produce, particularly when looking after two small children as a single mum at the time. When I re-launched we looked around for an external manufacturer and invested in that, and for us, it was the best thing we did. I prototype all of my own products which get sent off to a lab to be tested in the UK and then they are sent to Australia to be FODMAP approved. They come back to the UK after that and I work with my manufacturer to produce in bulk. Our manufacturer deals with so many distribution issues both in the UK and overseas for me too.