Scripts for Supper is the brain-child of former MasterChef semi-finalist Annie McKenzie. It’s an immersive dining experience, adapting classic stories, served with a menu inspired by the story. Fellow MasterChef finalist Juanita Hennessey is now Head Chef and designed a seasonal menu to match the much loved The Wind in The Willows. Our co-founder, Mecca Ibrahim, went along to a preview at Stepney City Farm to experience the second night. 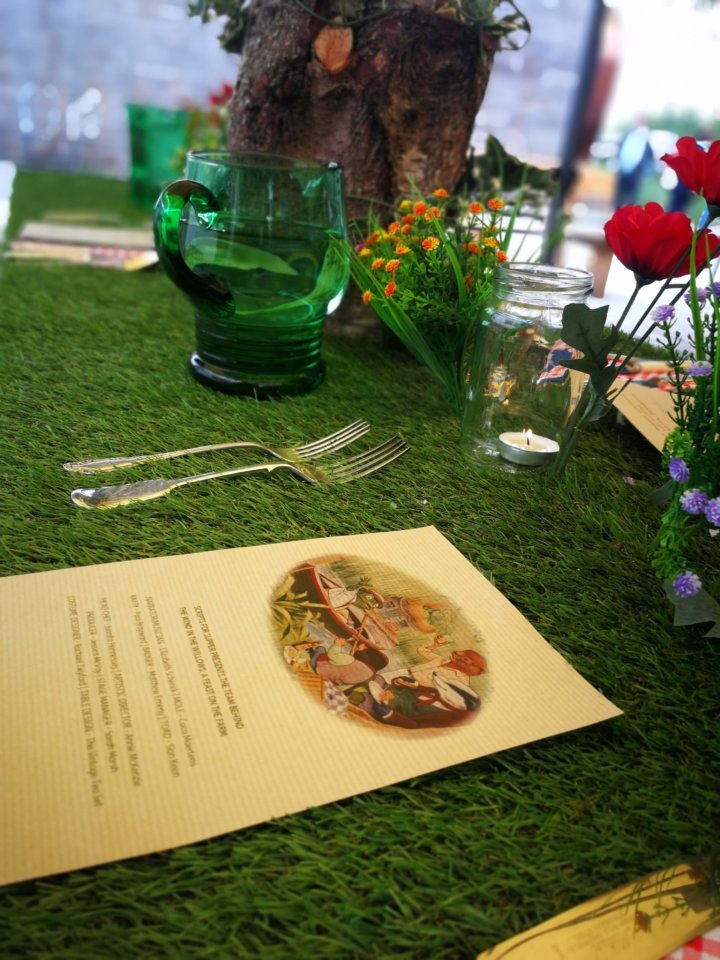 It takes a lot to get me to East London, I live west of West London, so something has to be pretty  intriguing to get me to Stepney.  However, I’m a sucker for City Farms, have a particular fondness for The Wind in The Willows, and having only met Juanita Hennessey once before (at MasterChef winner Jane Devonshire‘s book launch) immediately felt that she was a fun character and would produce an interesting menu for the night (Incidentally, I’ve met quite a few contestants from MasterChef  2016 who are all great story tellers – if you ever get the chance to eat any of their food, grab it).  Onto the review, we were told to wrap up warm as the performance would be outdoors.  It is, but you are under a shelter as even though it’s mid May,  the weather seems to have forgotten that it’s mid May. 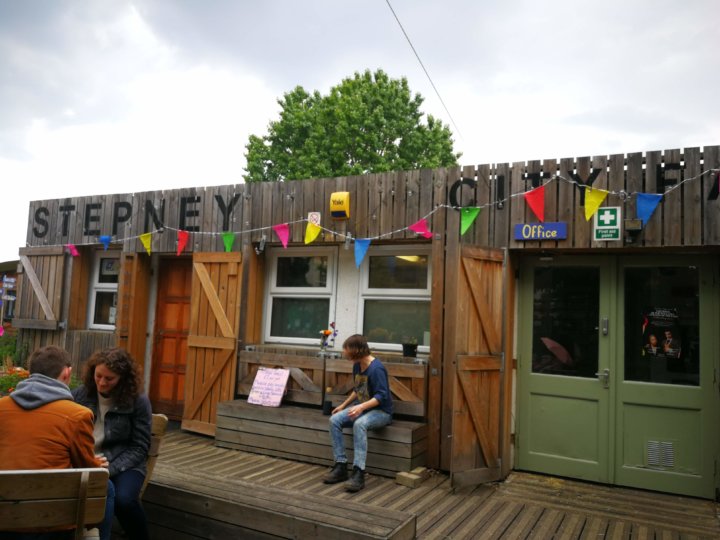 Stepney City Farm is a lovely ramshackle place. With sheep, goats and a black farmyard cat wandering around looking for scraps from dinners, it was the perfect setting for a production like The Wind in The Willows.  On arrival, before we were seated, we were treated to Ratty’s Lemonade cocktail (gin and lemonade) and Juanita’s Bubble & Squeak pasties with a vibrant herby “green sauce”.  There was no poncing around calling it zhoug or chermoula or pesto it was green sauce. 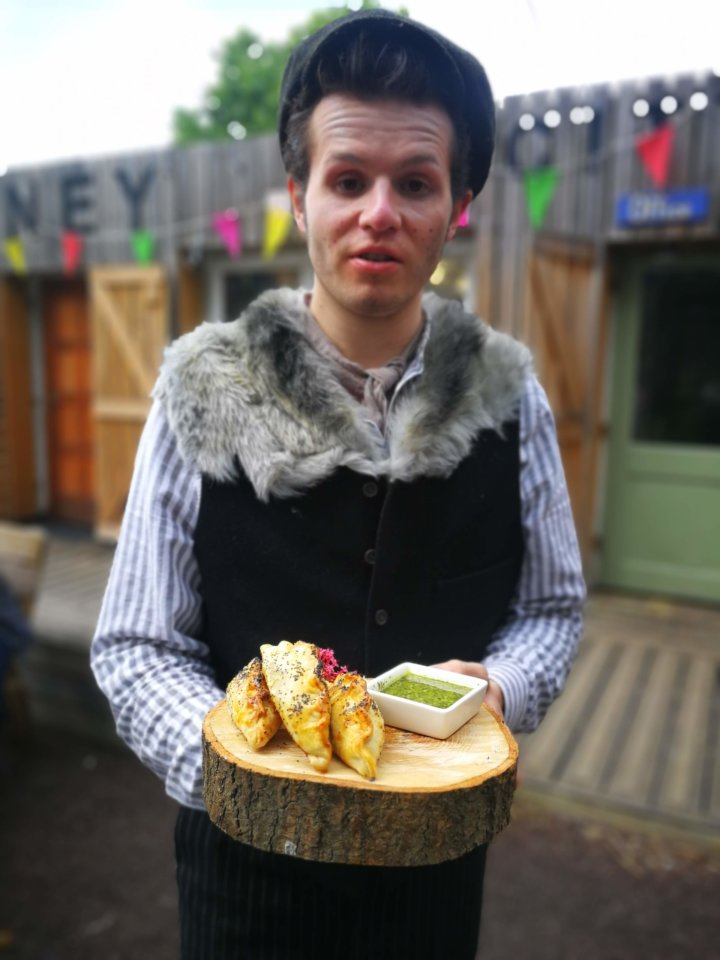 Badger (already in character) served us the golden pasties and said he was very excited that someone from MasterChef was cooking tonight, but since he didn’t have a TV he didn’t actually know what MasterChef was. He was shortly joined by Rat who also didn’t have a TV but had cassettes and wondered if you could listen to MasterChef on them.  This fun, puzzling, circular conversation with me & my guest Rosana McPhee, went on for a bit. But this is what immersive dining is about. You need to roll with it and get into the spirit of the production. 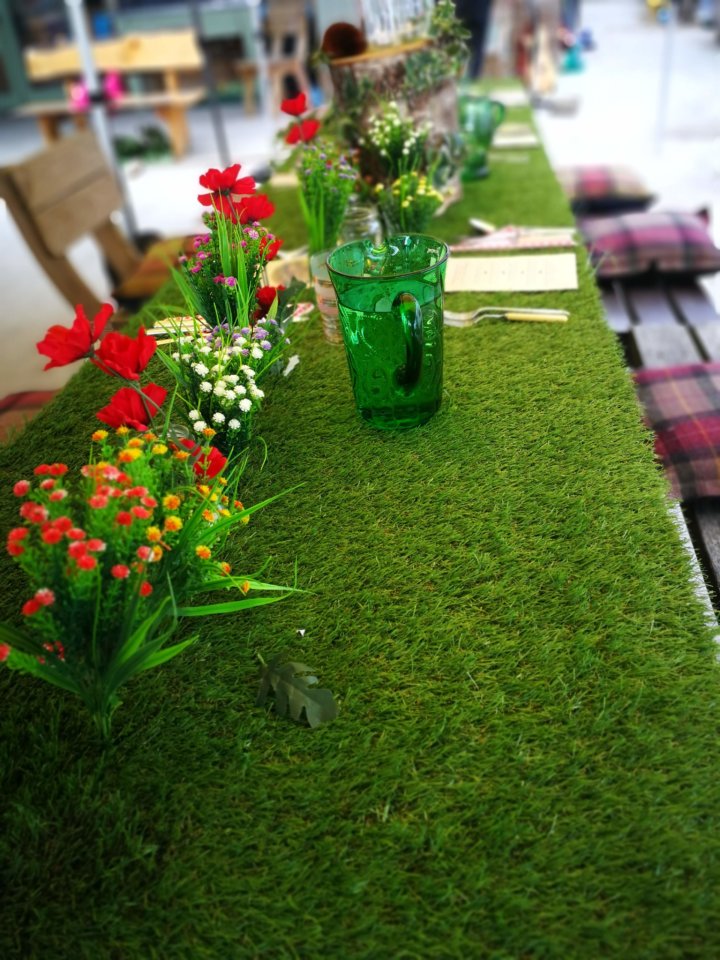 The table setting was delightful with logs, toadstools, wild flowers,  red and white checkered napkins, and just the thing that Rat & Mole would have had for their river bank picnics.  Along with each of the dishes in the four course menu that followed was a line from The Wind in the Willows relating to food & dining. 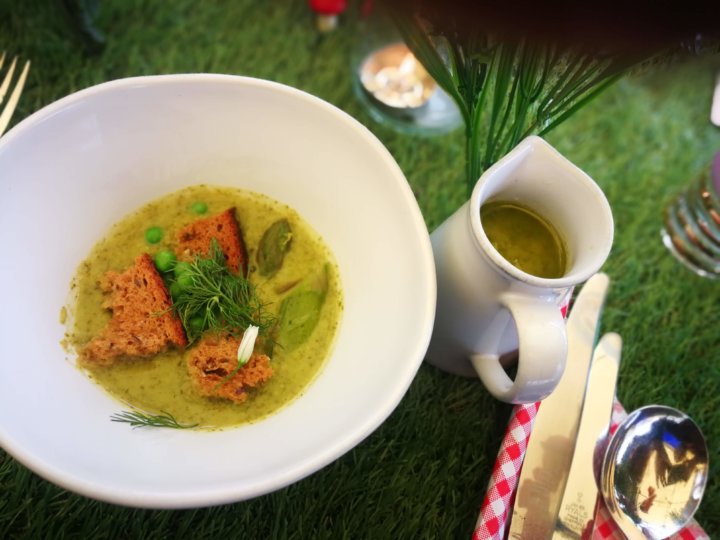 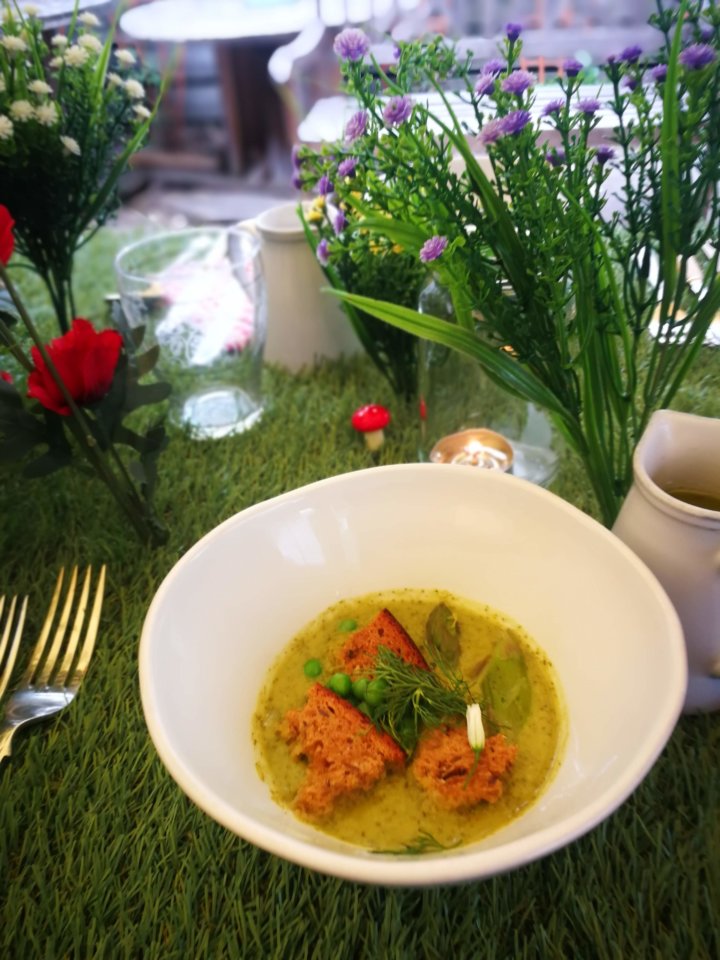 For someone who isn’t a big fan of soup I have to say that the watercress & pea soup with asparagus & chives was one of my favourite courses.  Juanita had shown that if soup is different with each mouthful it can be a joy. The pieces of asparagus, fresh peas, fresh  herbs & wild garlic flowers added flavour, texture and you could tell they’d been freshly picked from the farm. 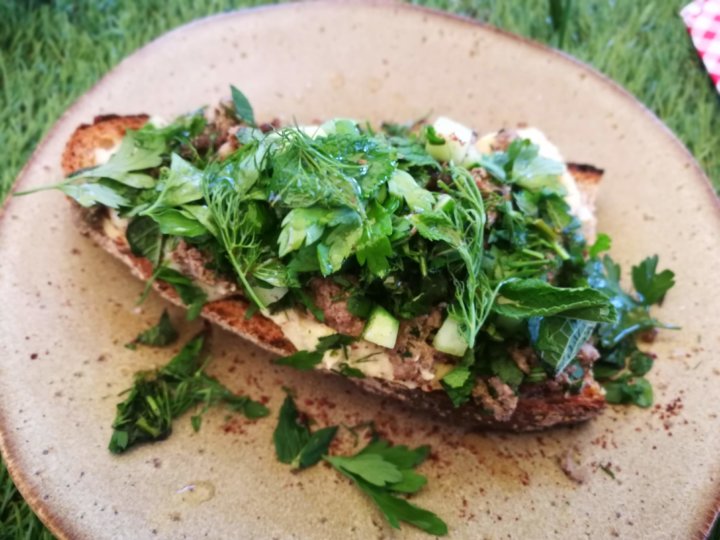 Every part of Juanita’s menu had a truly home cooked and cosy feel. She’s a chef who loves feeding people. The portion sizes were generous. Also for outdoor dining everything that supposed to be hot, was hot. I’ve been to immersive dining experiences before where the hot food comes out lukewarm (or worse still cold).  Each course served between the acts of the hugely fun and frantic production added to the sense that you were having a great adventure with Mole, Toad, Rat & Badger. 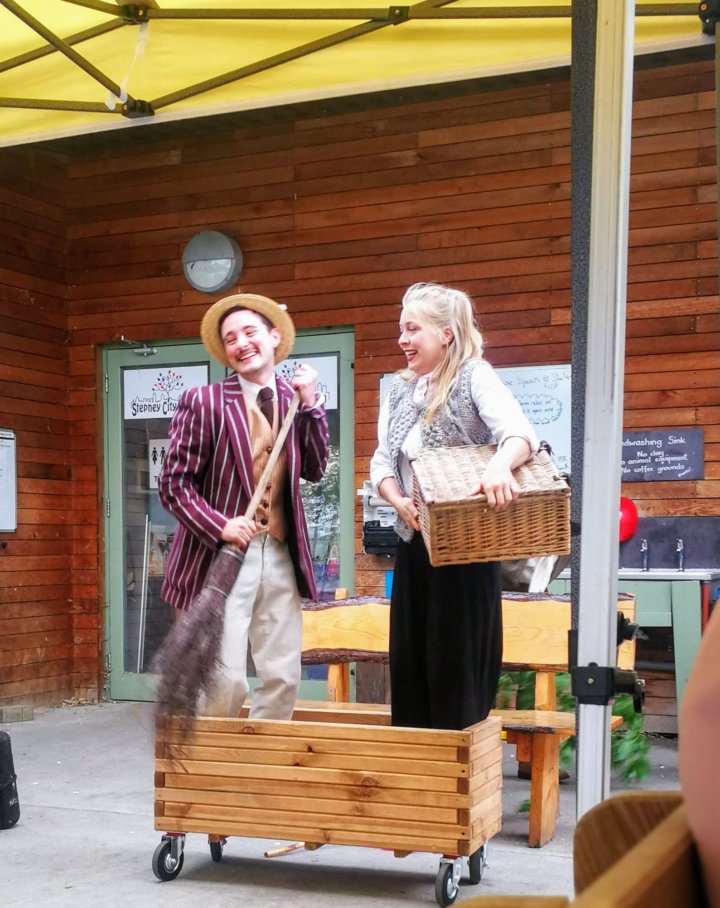 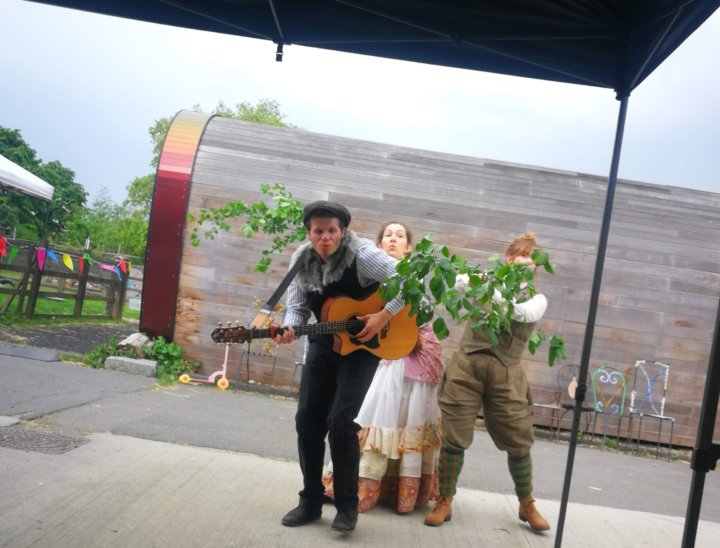 There was just enough interaction with the actors for you to feel involved but fortunately you were never pulled into “acting” with the people on stage. 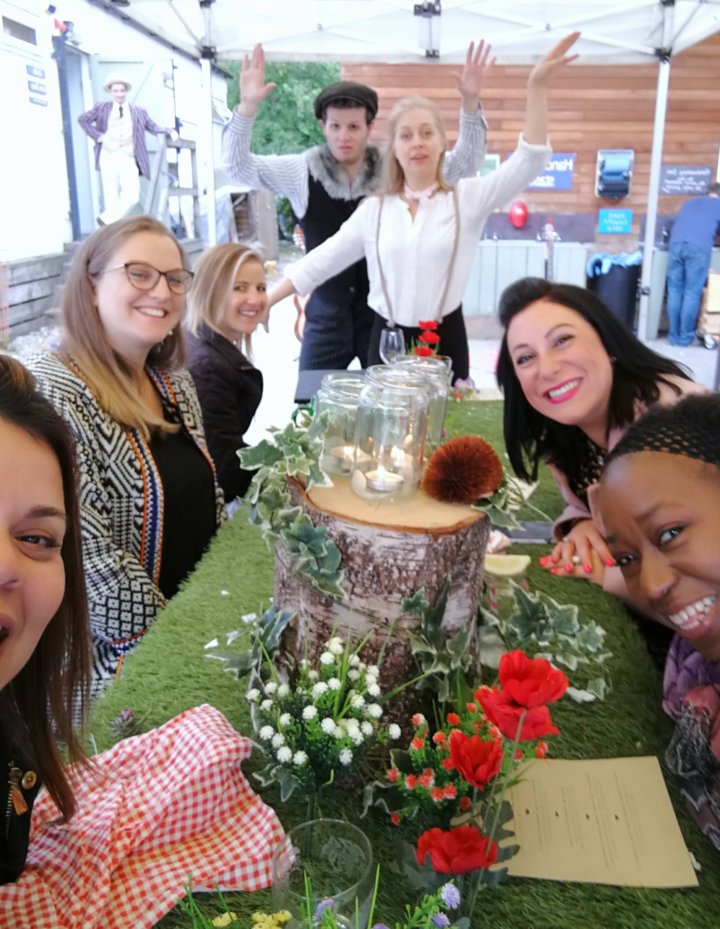 We sat with the lovely Suzy Pelta from our launch event (who had the vegetarian menu) and had a great time catching up during the courses & chatting to the actors (still in character) as they served us our food. 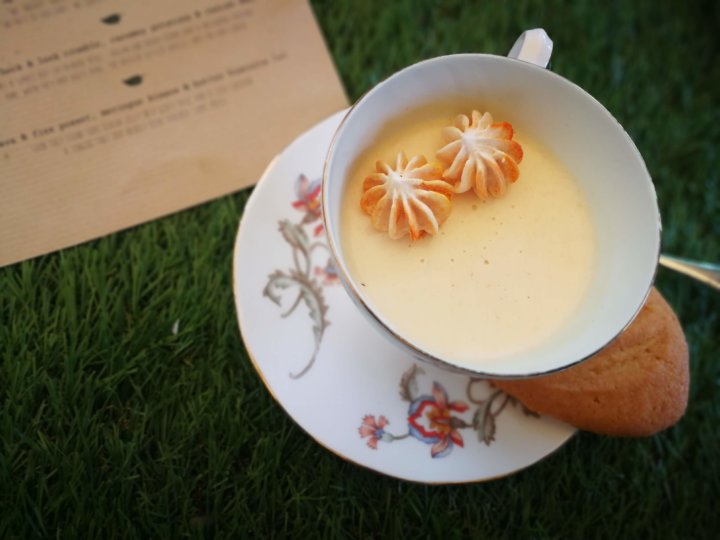 Although completely stuffed after the spring lamb, houmous & herbs on toast and bacon hock & leek crumble, caraway potatoes & radish salad, I managed to fit in the guava & fizz posset, meringue kisses & butter biscuits. The buttery biscuits (not sure if this was a slight reference to MasterChef’s classic buttery biscuit base video) were slightly warm from the oven and a fitting partner to the light and fizzy posset. It was the perfect way to end a jolly event.  Juanita’s very British, very seasonal & very riverbanky menu was a triumph and well worth my “trek” to Stepney!

Scripts for Supper‘s The Wind in the Willows will be at more London farms throughout May and June. Find out more & get tickets here.

If you’re a fan of MasterChef catch our interview with 2019’s MasterChef Champion Irini Tzortzoglou.  You might also like to read our reviews of restaurants  Pomona’s, Shola and Romulo Cafe.