One of the first things MasterChef champion Irini Tzortzoglou did on hearing of her win was offer to share the trophy with the two runners-up. 2019 was the first all female finale of MasterChef and our co-founder, Mecca Ibrahim, was delighted to interview Irini about her experience on the show.  She caught up with Irini not long after she had returned to her home in Cartmel, Cumbria after a working holiday to Crete, the place of her birth, to talk about what life was like after winning. 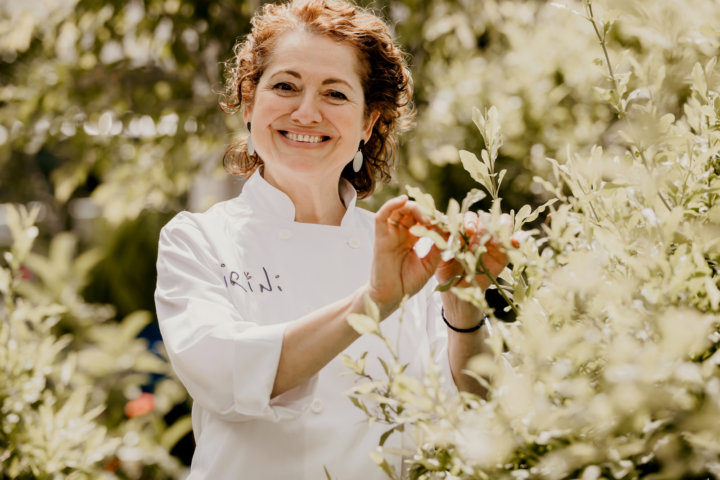 It has been a bit of a whirlwind for you since winning MasterChef what are some of the most exciting things that have happened?

Things can come out of the middle of nowhere. I went to Crete to visit my Mum and even when your mind is somewhere else such as with your family something MasterChef related can pop up. I was asked to cook at a local hotel in Crete and while I was there a couple of English people congratulated me on winning & made lovely fuss over me.  But there’s lots going on now.  A big publisher has approached me to discuss a book and I’m also doing a number of food festivals this summer.

Which food festivals will you be appearing at?

I’m doing two of the Foodies Festivals. There’s one at Syon Park West London, at the end of May and also one at Tatton Park in Cheshire in the middle of July.  These are all first experiences for me and I’m doing two demos at Syon Park. Over the next few days I’m doing lots of menu planning as I’m doing some Cumbrian festivals too –  Westmorland Country Fest and the Westmorland County Show. There’s also the Southport Flower Show which sounds lovely. Also Jilly, Delia-Maria and I, have been asked to do something at the Women of the Year Awards lunch, which is fabulous as we all really do love each other. All three of us were thrilled to be asked.

My grandparents were big landowners in our area in Crete.  My grandmother was cooking a lot for people who came to visit them. Often for 30 people at a time, so I would hang around and help her.  So I have so many memories of smells – smoking sausages, baking. My mother also cooked a lot and I remember that environment of a warm kitchen, where all the women would gather together, swap stories, solve problems, bring their issues together.  Food was so connected to life, and living and sharing. 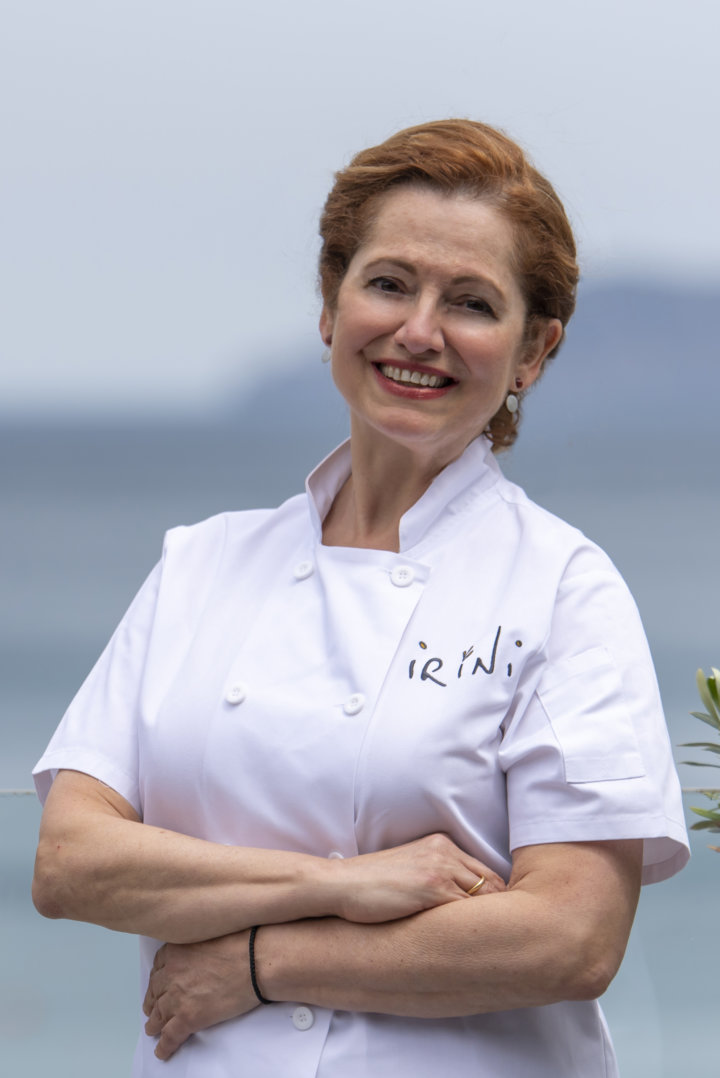 When I came to London and started a career in banking I didn’t have a lot of time to cook as I was so busy in my career.  London wasn’t really conducive for me to cook in but, now living here in Cumbria with all of the abundance of ingredients, I have a greater connection with food. I can buy eggs from the farmer up the road.  There are allotments all over the place and people give me fruit and vegetables they’ve grown. So moving to Cumbria brought that connection back with food that I loved. In the last 10 years since living in Cartmel my interest in food was re-kindled. Cumbria is a foodie county, within an hour there are so many great restaurants. So I cooked a lot more in Cumbria and threw more dinner parties and my husband said why don’t you go on MasterChef.

What was the dish you worried about the most in MasterChef?

Each dish was stressful in a different way, very often because of the lack of time. The one I was most disappointed with was my dessert in Hong Kong. Various elements did not work for me and that was rare to have so many things go wrong in one dish.  The other nerve wracking moment was when we cooked for the explorers and the pastry was very dry.

And which was your favourite dish in MasterChef?

My favourite tasks were the invention tests. I loved the scraps challenges. I was really pleased that I could make so much with leftovers.  It was satisfying on a number of levels to be able to do something towards avoiding food waste. 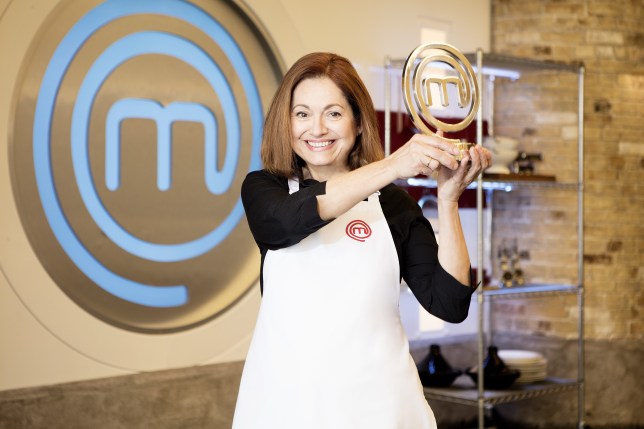 How long, on average, did you spend preparing for your MasterChef dishes?

I had a luxury of time preparing my dishes at home.  I wanted to try different plating options and sometimes might spend 3 to 10 hours on a dish.  I have great admiration for Delia-Maria who reached the finals with me, but was working in the police force, so had much less time to prep and I feel she’s a better cook than me.

Everyone was really touched by when you picked up your trophy that you wanted to share it with the other finalists. What was it about the relationship between the three of you that means you’ll remain friends?

We are all such different ages. Delia is 28, Jilly is 41, I am 61 but somehow that love, common respect and passion for food brought us together so it felt there was no age gap. I think none of us was that competitive with each other but competitive with ourselves.  Even though it was a TV competition and we knew that someone would win, we took things one day at a time, all of us were nervous but winning wasn’t the be all and end all. 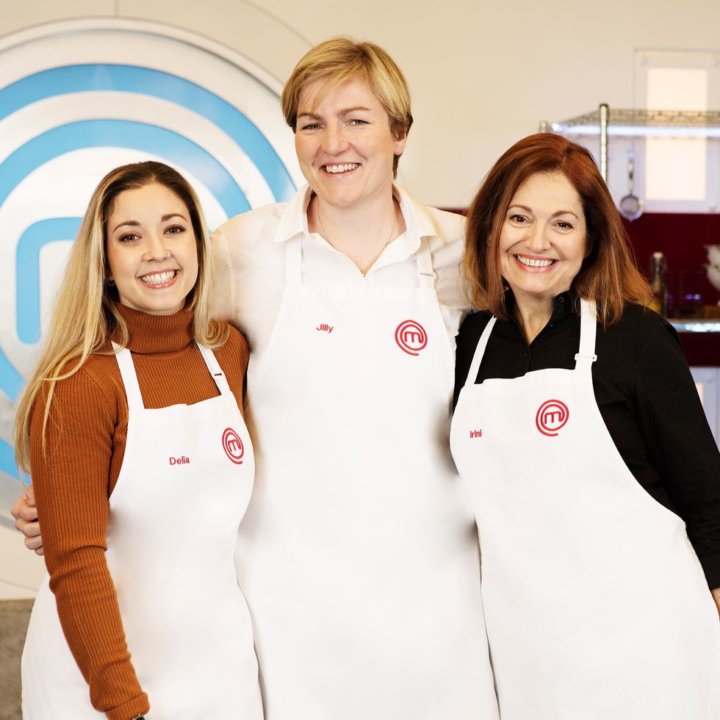 Who were some of the best chefs you cooked with during MasterChef?

They were all interesting in many different ways. I loved the passion of Raymond Blanc and cooking with him and Gary Jones from Le Manoir was wonderful. That day in the studio of cooking with them both was amazing. Everyone loved it – the crew, the presenters, the contestants. Everybody had a fantastic day. Raymond and Gary spoke a lot about the physicality of food and had a big respect for all ingredients. Raymond stayed in the kitchen all of the time when he could have easily hung out with John & Gregg.  Both him and Gary spent an extra hour and half with us all, they were having such a good time. Raymond said you’ll never get rid of us now!

If you were marooned on a desert island, what ingredient could you not live without?

For survival I would probably say honey or flour. But if it was was to spoil myself I would say chocolate any day. I could potentially live on chocolate.

Finally, what one piece of advice would you give to anyone who wanted to be in your position, appearing on and winning MasterChef and no doubt having a cookery book out in the future?

You need to believe in yourself and you will grow. Also it’s important to acknowledge others, as we don’t live in isolation. What became evident to me during the series, without being strategic at all, as I don’t think you can manufacture it, is if you apply yourself fully in whatever you do, it doesn’t have to be just cooking, you will thrive. Ultimately you need to have ability but with focus and drive, you’ll develop that ability and it will take you that little bit further.

Irini will be appearing at many food festivals over the summer as mentioned above. If you think you have what it takes to be on TV in a food show, discover what TV producers are looking for in our feature – 7 things you always wanted to know about being on TV in the food world!