Great British Menu (GBM) returned to our screens in March for season 15. The show on BBC2 puts the nation’s most talented chefs to the test. At Women in the Food Industry we are continuing our series of interviews with the strong female line-up of chefs from across Britain competing to serve their dish at the final banquet. Our co-founder, Mecca Ibrahim, interviewed Harriet Mansell, who is opening up a pop-up restaurant Robin Wylde in Lyme Regis. 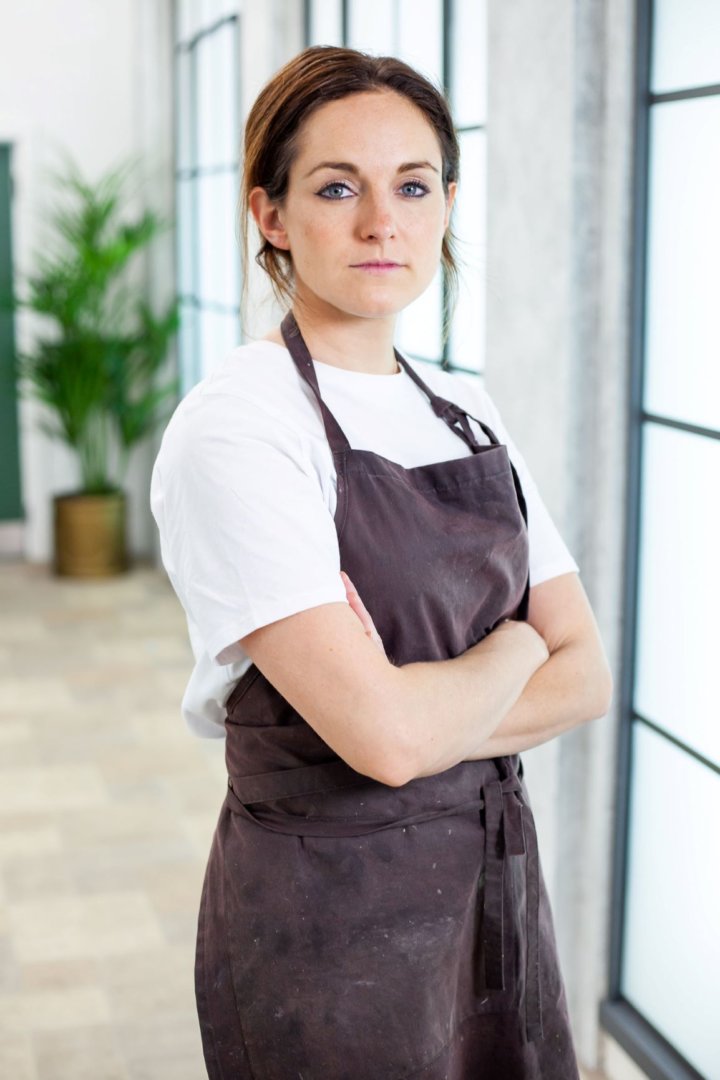 I trained at Tante Marie Culinary Academy in Woking. But before that I studied History and Politics at university. Although technically I started working in the food industry when I was 12, as I worked in a fruit and veg shop! But I also worked in local restaurants too in part time jobs. After university I did a ski season and worked with lots of chefs out there. I was so inspired by them and at that point I thought that hospitality is what makes me happy. That feeling came from a place of passion and love.

What were some of the key skills that you learnt from your time in Michelin starred restaurants?  How did you then move into becoming a private chef?

I must say I only dipped my toe in the water when it comes to Michelin starred restaurants, the majority of my experience has been elsewhere, but there are undeniably things that you pick up from this experience, such as discipline, precision, consistency and having your eyes opened to new techniques and ingredients. I did a 3 month stage at Noma, followed by one month at Dinner by Heston and then a little time at Hedone in Chiswick, before deciding to go back to working on yachts. When I was around 17 or 18 I had a fixation about wanting to work on a boat, as I’d sailed a bit as a child. When I was in my early twenties, I had the opportunity to work on a private motor yacht in a seasonal role for six months.  It took me round Italy and Croatia and I really got a feel for going round local markets. It was also quite well paid, but I knew to do well I needed to be culinary trained, which is why I went to Tante Marie. 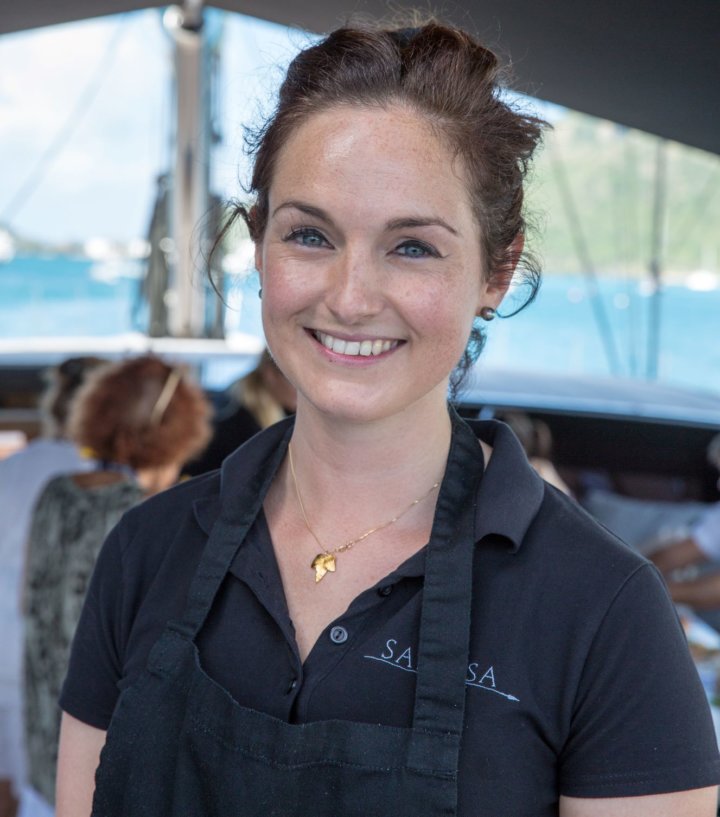 Can you tell us more about working on yachts as private chef? What was a typical day like?

I got a position as a sous chef working under a chef called Phil Storey who had previously owned a Michelin starred restaurant in Winchester. This was on a 60 metre motor yacht which was chartered so we had different guests on each week. I worked on other boats after that including the Qatari royal family and the Murdoch family. A typical day varies from family to family but typically I would be up at 5am baking pastries and preparing breakfast for the crew and the family. You’re then preparing lunch for the crew, the family and maybe guests, so you are constantly adapting to their needs. You need to do provisioning and then you’re preparing dinner and parties and canapes. It’s fairly non stop and you don’t do a typical service. You have to adapt to what’s available depending on where you are sailing to.

I loved dipping in and out of countries and cultures. You experience and see so much. You get a completely different experience from working in a static restaurant and kitchen. 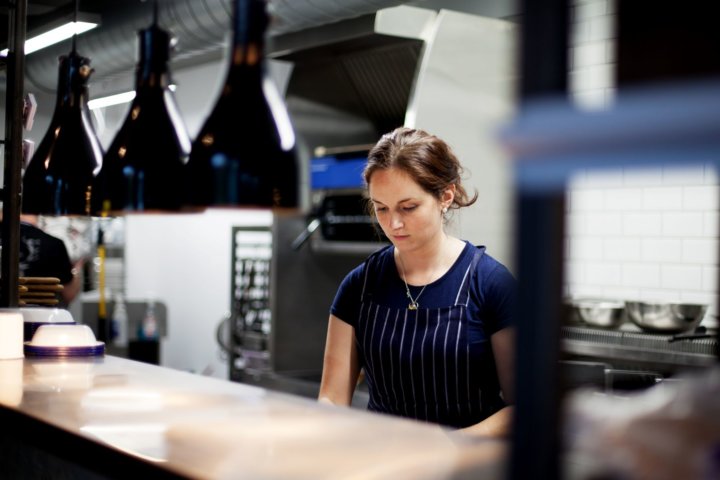 When did you decide to open up your own restaurant?

Funnily enough when I was 12 or 13 I said to my parents I wanted my own restaurant, which was way before I did culinary training. A couple of years ago I had an absolutely terrible year and mentally dealt with some emotional trauma. I left the private yacht world and spent some time sorting my head out. I did some yoga training in Bali and Sri Lanka and while I was out there having some quiet reflective time, I had a strong desire to come back home and connect to the seasons and the world around me. I booked a flight back to the UK last January to do my own thing.  People kept saying I should contact a lovely lady called Ali who runs a space called The Pop Up Kitchen in Lyme Regis which was half and hour from where I grew up. I did, and we had a lovely connection and she allowed me to hire the space for four nights a week last summer.

I did the whole of January in 2020 but was working on getting planning permission for my new restaurant – Robin Wylde. I had the freedom of not being tied down to anything, so I threw myself into the project really hard before coronavirus hit the industry. 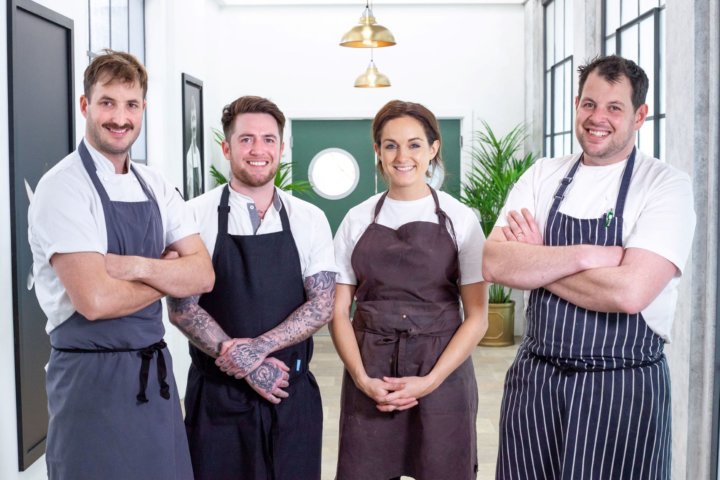 At the end of last summer I was contacted by a producers on the show and they were looking for chefs in the South West as they hadn’t had any applications from women there. The producers also wanted to get emerging chefs on the show and liked the pop-up restaurant scene. She sent me the brief and as I was setting up my own restaurant then, to do it justice I knew it would be a huge amount of work, but I thought, why not, let’s go for it.

You walk in and see all the film crew and at first it is so nerve wracking. It’s almost impossible to work without your hands shaking. You can’t predict what it’s like until you are there. I was taken aback, but gradually you acclimatise and get used to it. 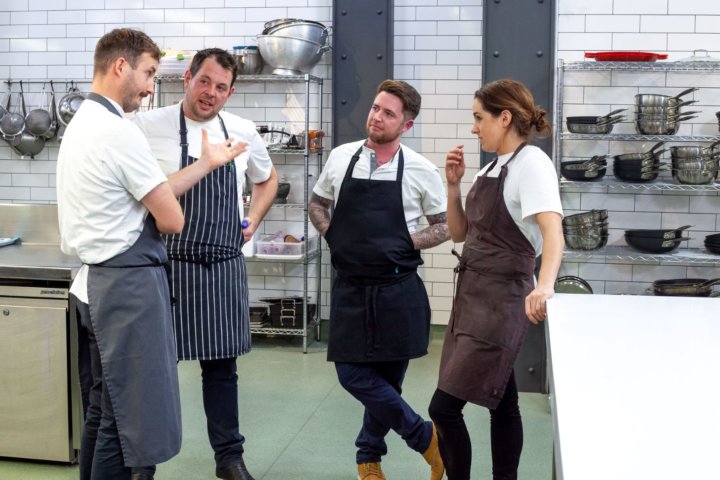 With the brief you need to go mega local, for me most of it was easy as the area around me is magical and there’s some incredible children’s literature from where I live. For example Beatrix Potter used to holiday in Lyme Regis and Enid Blyton holidayed down in Dorset and that’s where she set The Famous Five.

My starter was the hardest. I took the brief incredibly seriously about using strictly local ingredients. It was based on a very local author from Devon. In my head I had quite an elaborate theme and I knew there would be severe time constraints around it. Doing the show is a huge learning experience. 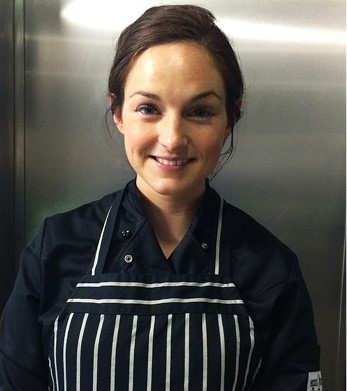 It’s such a theatrical theme and the banquet calls for it. I felt to make it fun and whimsical I needed to do something to bolster that. At the end of the day it is a competition about food, but it does take a long time researching, sourcing and preparing the props and if I did it again I would spend more time on the food. 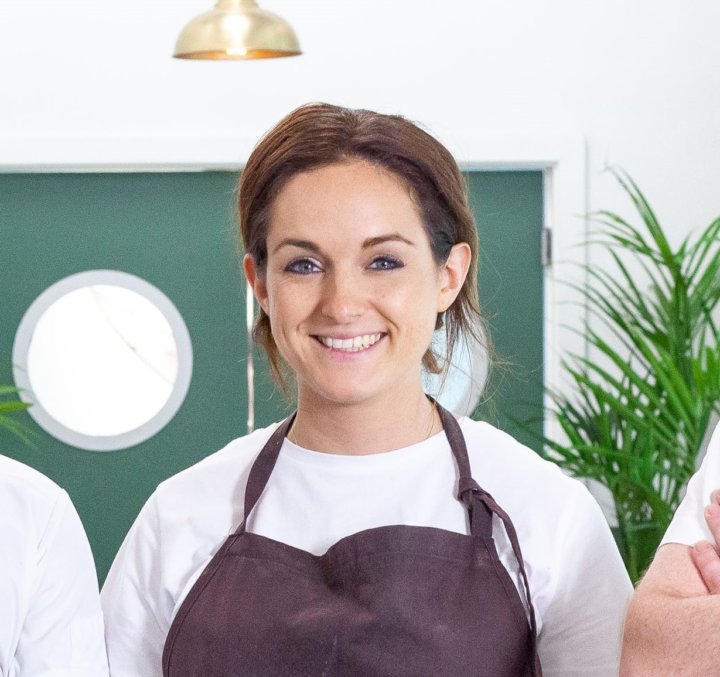 We’ve seen the biggest number of women taking part in GBM this year, yet you’re the only woman in your round.  Have you always worked in kitchens where women have been in the minority? Do you think it’s important to have more of a gender balance?

Yes, any kitchen I’ve worked in women have been in the minority. I do think that balance and attitudes have shifted and will continue to. Men and women bring something different to any situation, including the kitchen. Having said that, it seems to me it’s a certain type of person that becomes a chef. Women however, in my experience, are often more calm, nurturing and supportive of one another. That’s just my experience. However, regardless of gender people should be assessed on their independent merits.

I do think that women are generally more nurturing. Watching the show a couple of weeks ago with Roberta Hall and Amy Elles, I loved both of their personalities and they built each other up so well and absolutely supported each other. 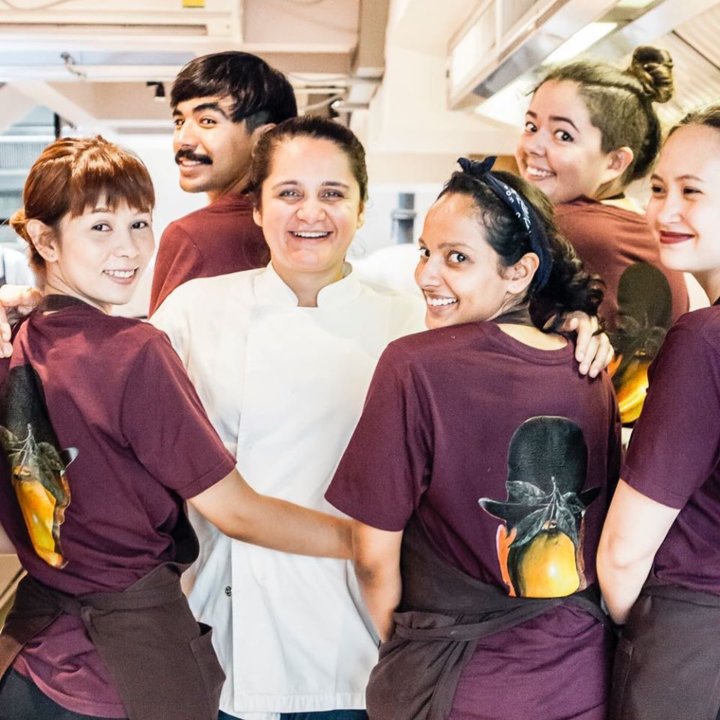 There was a reason why approached Mark Hix to work at his restaurant. He’s a chef from the south west and I think he’s a real revolutionary in the British food industry. He has a great ethos around food and I really look up to him.  I also look up to Dominique Crenn who has knocked it out of the park in a different way. There’s also a chef who I was lucky enough to be on her section when I worked at Noma, she’s called Garima Arora.  She was the first Indian woman to get a Michelin star and now has her own restaurant in Bangkok called Restaurant Gaa. I’ve always loved her sense of determination and focus and she’s such a down to earth person. Then on a more personal level there was a really talented chef I met when I was 20 on my first ski season called Chris Rowley. He worked for great chefs such as Gary Rhodes and then went to work on yachts and when I went to work on yachts too, he was so helpful and supportive.

Anything to do with bread. Pretty much everything good in life in some kind of sandwich. Whether it’s a pizza, or a toastie or flatbread. It’s brilliant what you can do with flour and water. Look at the world right now, there’s a whole sourdough revolution.

Everyone’s journey is different, so embrace yours and don’t beat yourself up about your journey. Enjoy life and try to work out how to relax and get some balance in your life, so it can be fun.