Women in Wartime – What can we learn from Good Housekeeping?

We are approaching a time of uncertainty and major change. At the time of writing we have no idea how much longer the UK will remain part of Europe. The Operation Yellowhammer report exposed the worst case scenario of  a No Deal Brexit with talk of reduction of choice & availability of food. Remembrance Sunday & Armistice Day also naturally turns our attention to wartime austerity with its rationing, loss of loved ones but the nation also experienced a special spirit of unity. At time when the country feels division so keenly, what, if anything, can we learn from how women in times of war dealt with everyday issues such as food shortages.  Our co-founder, Mecca Ibrahim, turned to a battered second hand book – The Home Front – The Best of Good Housekeeping 1939-1945 for guidance. 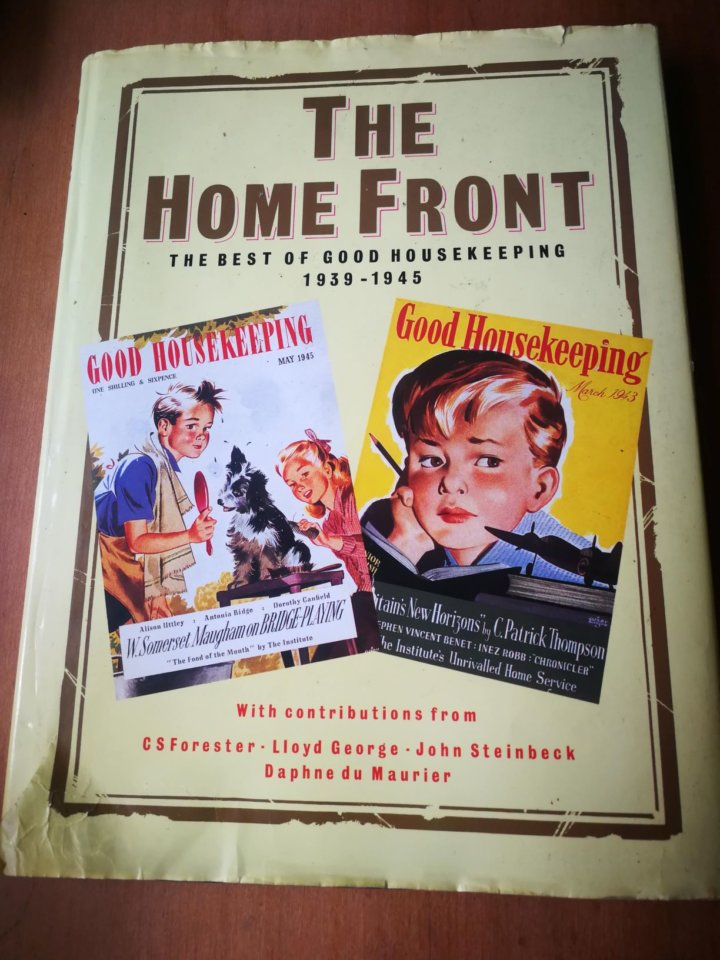 I have a huge collection of second hand books. Some of my favourites are old cookery books as I love the social history of food. One well loved book, that isn’t full of recipes but deals with many issues that are on our mind is an anthology of articles from Good Housekeeping magazine during the second world war.  The introduction when I read it my favourite “pre-loved” bookshop on Charing Cross Road gripped me and I hope others may find of interest too.

“From the Home Front – dispensing advice on paper salvage, cooking with dried eggs, assembling a hope chest, and feeding a family of five for £3.10s a week  – to the front lines – how to write a letter to loved one from far away, choosing books for a prisoner of war, and coping with the influx of GIs Good Housekeeping never surrendered its task of providing information and necessary relief for those facing a world where nothing would ever be the same again.” 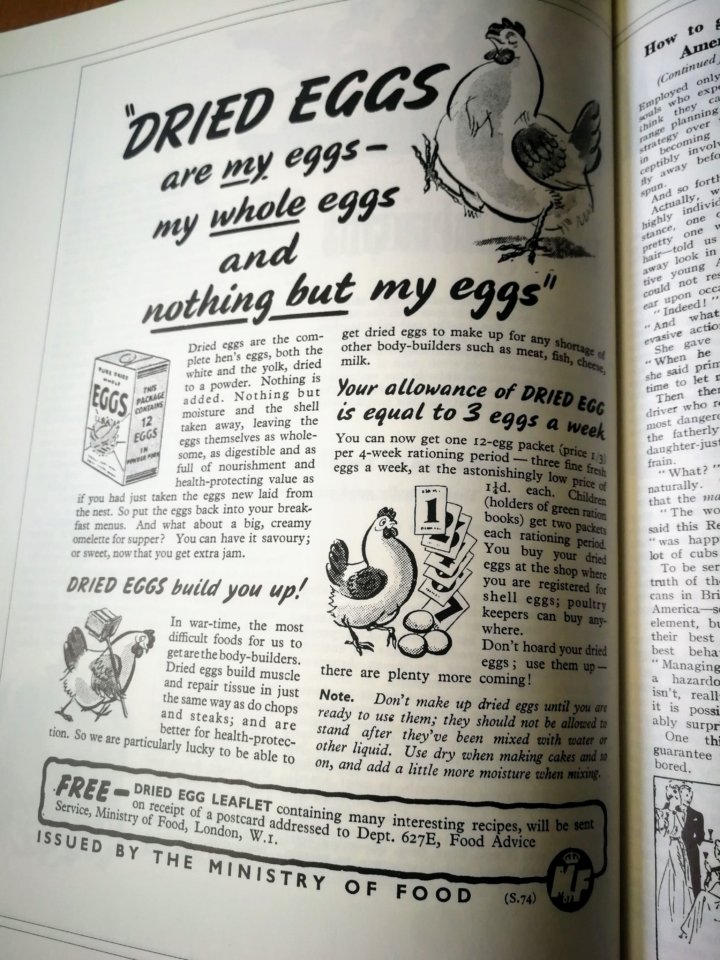 Food rationing was the first time many people thought carefully about food waste.  Not as a trend or in response to climate change and sustainability issues, but because certain foods were not available. A shortage of eggs, sugar and fresh fruit led to many recipes we take for granted now – for example carrot cake and bread pudding. The Good Housekeeping book has not only recipes and meal planners for feeding a family of five on three pounds 10 shillings a week, but advertising endorsed by The Ministry of Food on how to use new dried eggs – a new import from America.  Dried egg powder became available in 1942 (fresh eggs were rationed in June 1942) and they were used to supplement the egg allowance while rationing was in place. 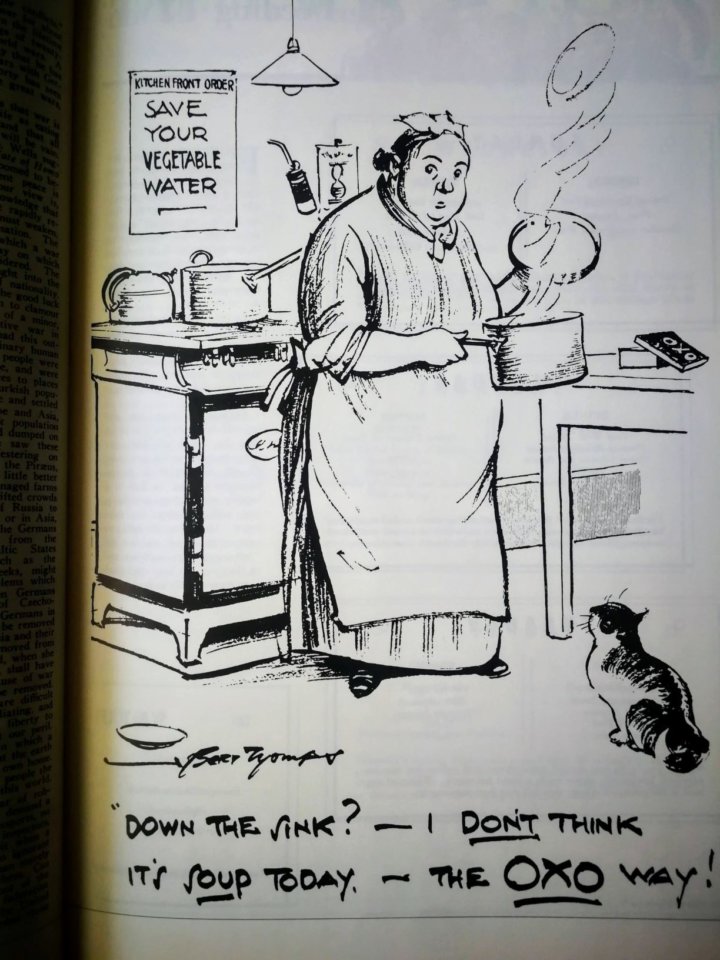 The OXO ad above, encouraged people to think before throwing away vegetable water and to use it for soups or stock.  today’s food waste writers talk of the importance of planning and this was very much on the agenda for wartime families.  Good Housekeeping wrote “Fourteen shillings per person, per head on food for a family of five doesn’t allow a lot of margin, especially in wartime when prices are on the up and up, but by using yor head and planning  in advance as much as possible, you can produce four nourishing , well balanced and quite interesting meals for every day of the seven“. 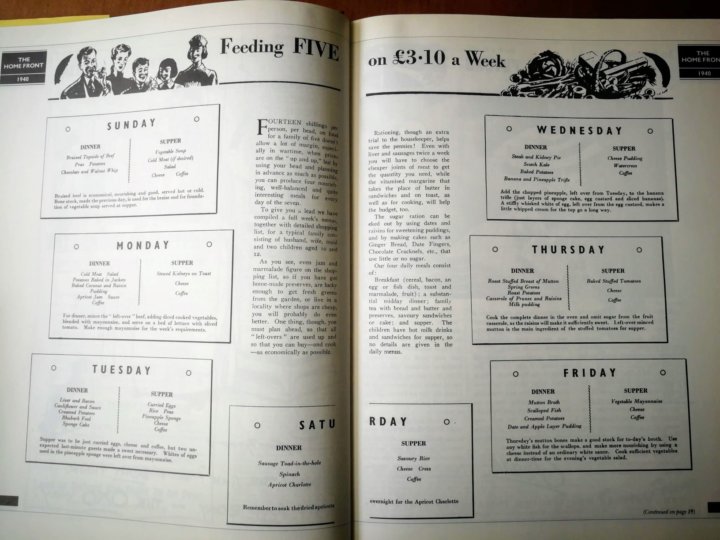 The double page spread above stresses the importance of planning ahead, so “all left overs are used up, so you can buy – and cook – as economically as possible.” Using potatoes with versatility was seen as part of the “battle”. In addition to encouraging people to grow their own potatoes and “dig for victory”, the magazine published a Viennese recipe for fish cakes “when Vienna was still a city of song” and “Potato cookery was carried out to a fine art in Vienna”. 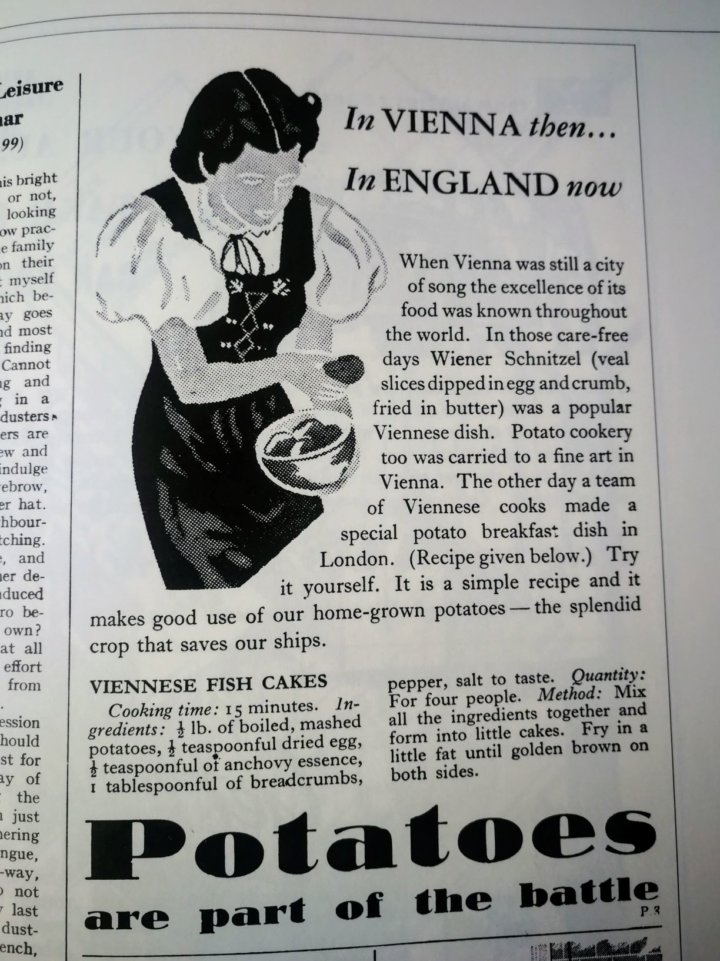 Ford’s adverts were also keen to stress the importance of potatoes in the war effort. “if we follow the advice of those who are in charge of supplies , the foods and fruits of Britain will last longer and go further. If by eating more potatoes we can save more bread then let’s all feel delighted to do so.” reads their patriotic copy with no mention of buying a Ford car! 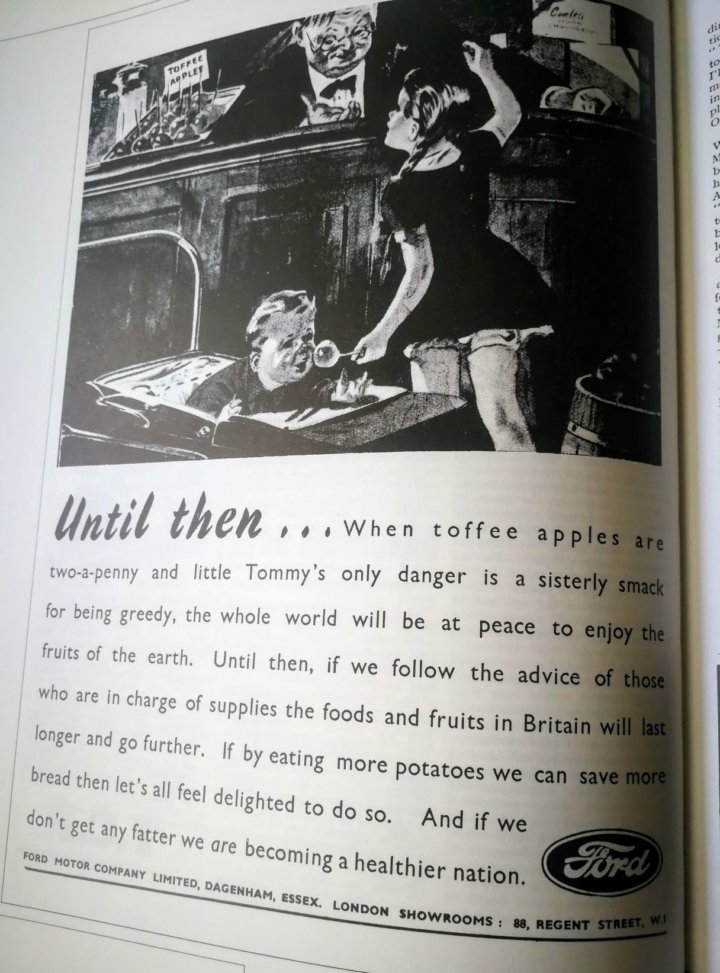 Another kitchen ad which caught my eye, was one for AGA. Today we can’t all afford or have space for an AGA in our kitchens, but back in the second world war the company played on the energy efficiency of an AGA as a “sure, if silent aid to victory in wartime.” 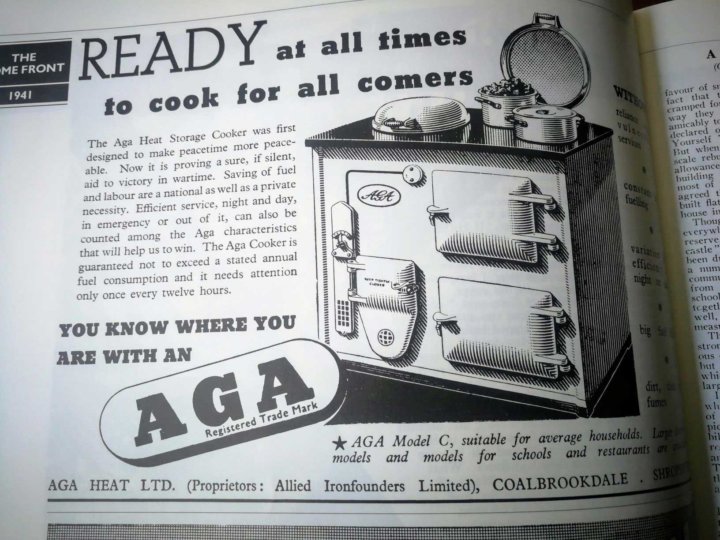 Some of the greatest writers of the time contributed to Good Housekeeping in the wartime years. Daphne Du Maurier in 1940 advised women how to deal with the strain of separation from loved in “Letter Writing in Wartime”. The Blitz spirit couldn’t come across more strongly in her brisk, no-nonsense advice. “No hard rules can be laid down. One thing is certain though… The woman who dares to write ‘This agony of separation is too much for me to bear’ cannot be forgiven.”  Blimey Daphne that’s a bit harsh.

But she continues “Whatever she does and must feel in her heart, of strain and anxiety, no sign of it should appear in any of her letters….We must be strong and confident and full of faith, so that some measure of the spirit we will show will find its way to the reader far away, bringing him comfort and hope and a quiet peace even in the midst of very great horror and distress.” 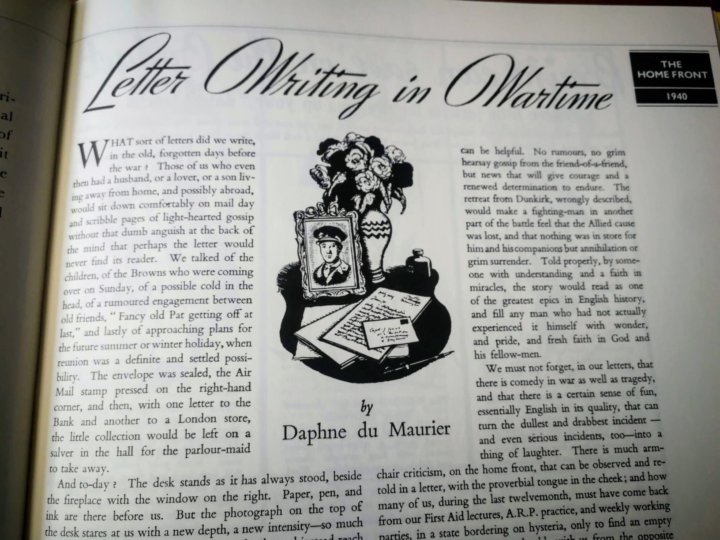 Her feature continues about using example of the comedy  of war as well as tragedy. “There is a certain sense of fun, essentially English in its quality that can turn the dullest and drabbest incident into a thing of laughter….how many of us have come back from our First Aid lectures or  ARP practice in a state bordering on hysteria….  It is these things we want to remember in wartime, the idiotic and the heroic, the ridiculous and the sublime, so that we can make a hotch-potch of them in our letters and the man who reads them will breathe for one minute something of our unchanging,  foolish world.”

She has a point and it’s why in times of great trouble comedy  and  satire can help us through dark times. “The grumbles are best forgotten, the rumours of ill-omen, the bitter scraps of criticism, the complacency and selfishness combined.” 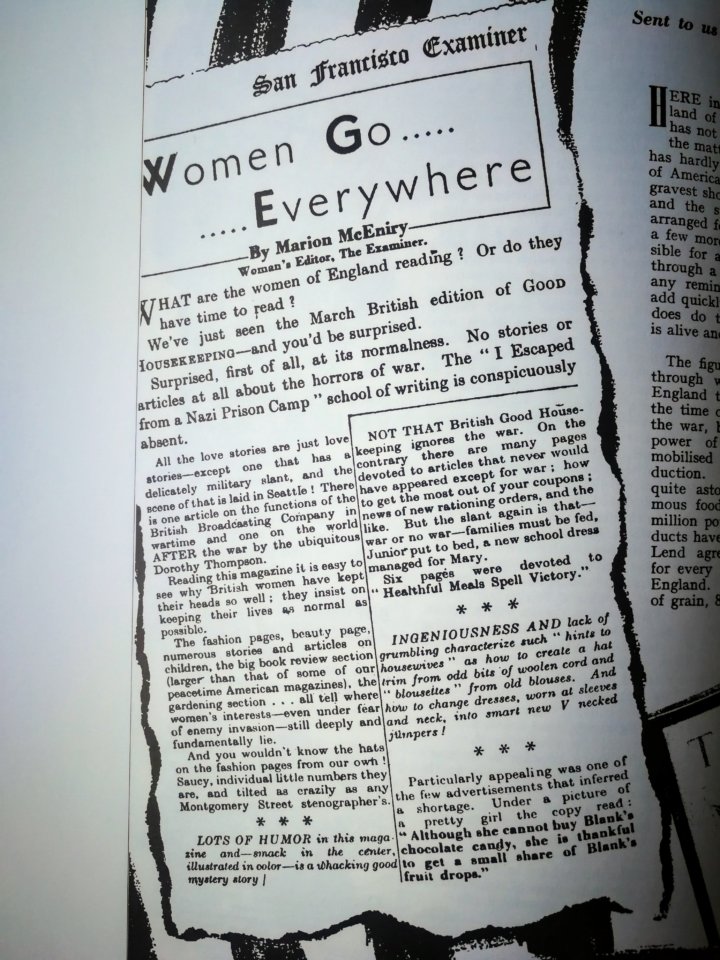 A female journalist writing for the San Francisco Examiner also commented on the “normalness” of Good Housekeeping in wartime. “No stories or articles about the horrors of war… Reading this magazine it’s easy to see why British women have kept their heads so well : they insist on keeping their lives as normal as possible“.  She acknowledges that the war is obviously not forgotten but that “war or no war families must be fed… Six pages were devoted to Healthful Meals Spell Victory!“. 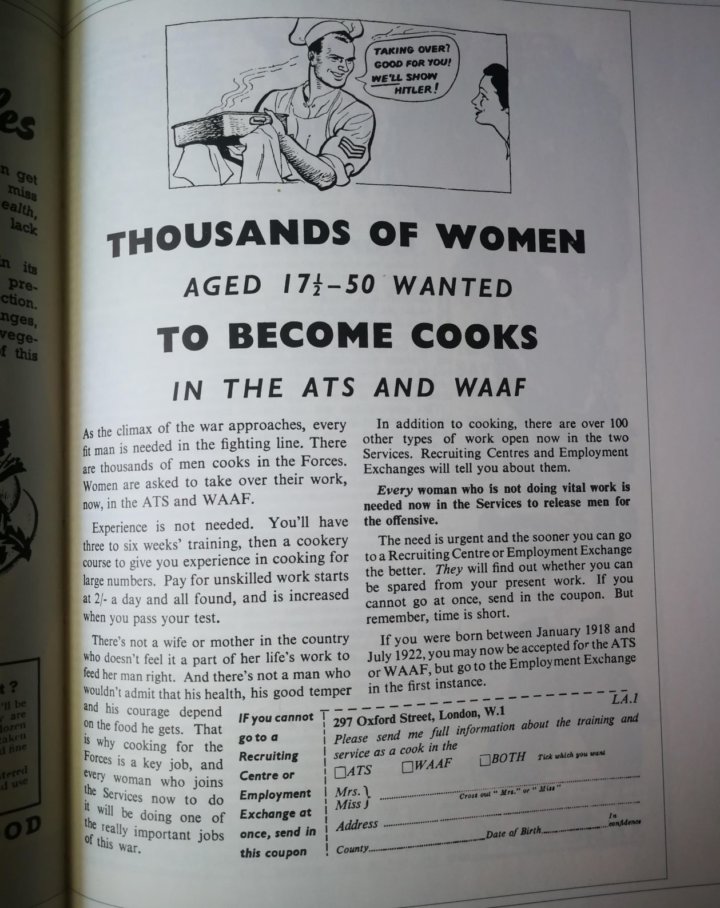 Also let’s not forget that during the war, for the first time many women worked in jobs that were previously only carried out by men.  The ad pictured above from Good Housekeeping calls for women to become cooks in the ATS (the Auxiliary Territorial Service was the women’s branch of the British Army) and WAAF (The Women’s Auxiliary Air Force). The cartoon header “Taking Over? Good for you, we’ll show Hitler” and some of the language in the ad (“There’s not a wife or mother in the country who doesn’t feel it part of her life’s work feed her man right“) are obviously a sign of the time.  But women were trained to work in professional kitchens and gained valuable experience in cooking for large numbers.  No one said they weren’t strong enough to do the job or were unable to carry heavy pots and pans! 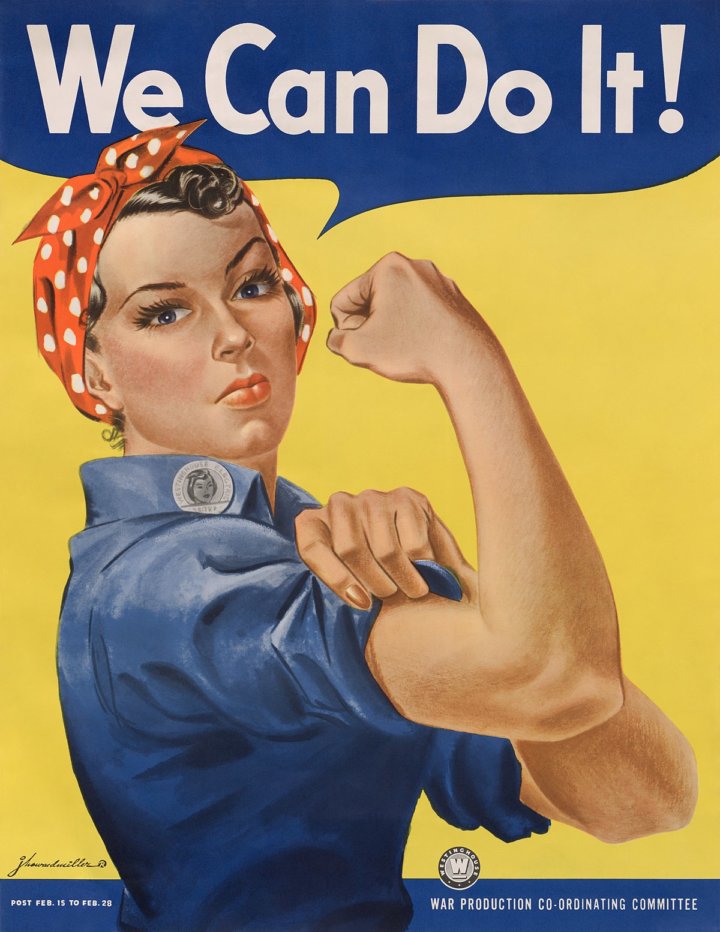 Even if the cooks went back to being housewives, that experience and knowledge would have given the new women cooks a sense of empowerment and value.

The importance of women working in war time was most famously symbolised by the “We Can Do It” or “Rosie The Riveter” poster. Produced in 1943 it was an inspirational image to boost female worker morale but apparently was seen very little during the second world war.  Rediscovered in the early 1980’s and replicated by many women today, it remains a strong image for female empowerment.  Let’s celebrate the work of Good Housekeeping in wartime too and how it reflected women’s struggles, victories and a special sense of unity which should be of great value today.

You may also like our review of Feast for the Eyes – The Story of Food in Photography  which runs at The Photographers’ Gallery until 9 February 2020.