Food: Bigger than the Plate Exhibition at the V & A – Women In the Food Industry Review

Quirky, surprising, beautiful, revolting, tasty, synthetic, thought-provoking, eye-brow raising but never, ever dull.  If you’re interested in food, its origins and its future you must go to Food: Bigger Than The Plate – the new exhibition at the V & A Museum in London.  Our co-founder, Mecca Ibrahim, went along to the show’s public opening on 18 May to see the museum’s take on the politics and pleasure of food. 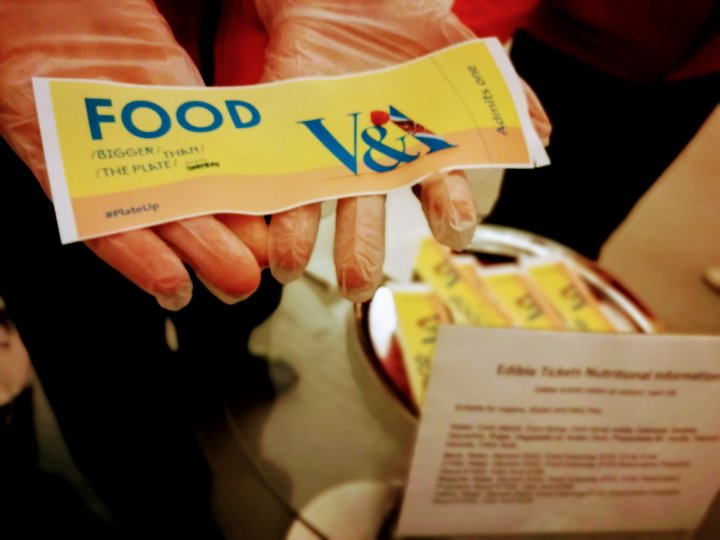 Our good friend & award-winning food & travel blogger Rosana McPhee asked if I’d like to be her plus one to the opening day of Food: Bigger Than the Plate. It took me a second to say yes. From the colourful Tube posters of  towers of food impossibly balanced on plates, to the reports about displays of  cheese made from Heston Blumenthal’s pubic hair and Ruby Tandoh’s nose, how could I say no.  As we were one of the first 200 to enter we were given an edible ticket, which we were told to eat at our own risk. So far so Charlie & the Chocolate Factory. When looking at the huge list of ‘ingredients’ in it, Rosana decided to pass. I’m game for trying most things once, and I wished I hadn’t. It was a interesting idea but with so many synthetic ingredients, it tasted vile. Mmm I thought, not a great start – is this going to be super gimmicky. But I was soon proved wrong. 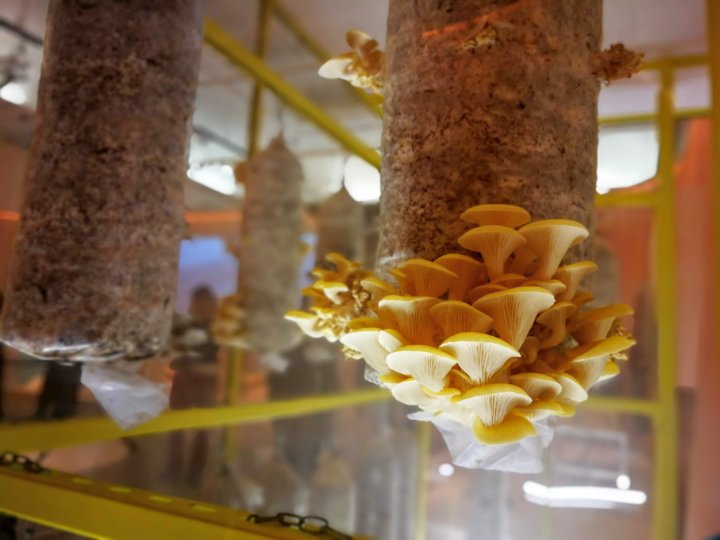 The exhibition bills itself as having over 70 contemporary art and design projects, plus exhibits relating to food from the museum’s own collection which “brings together the politics and pleasure of food to ask how the collective choices we make can lead to a more sustainable, just and delicious food future“.  It is split into four areas: Composting, Farming, Trading and Eating. Composting is designed to change our perceptions of waste and in the first area, you are greeted by a beautiful display of edible mushrooms growing from plastic bags filled with something or other & used coffee grounds. I had grown these myself from “low tech mushroom farmers” GroCycle in brown boxes at home.  But seeing them hanging in the V&A like alien pods from Star Trek made me wonder how many coffee shops did anything with used coffee grounds, other than throw them away? 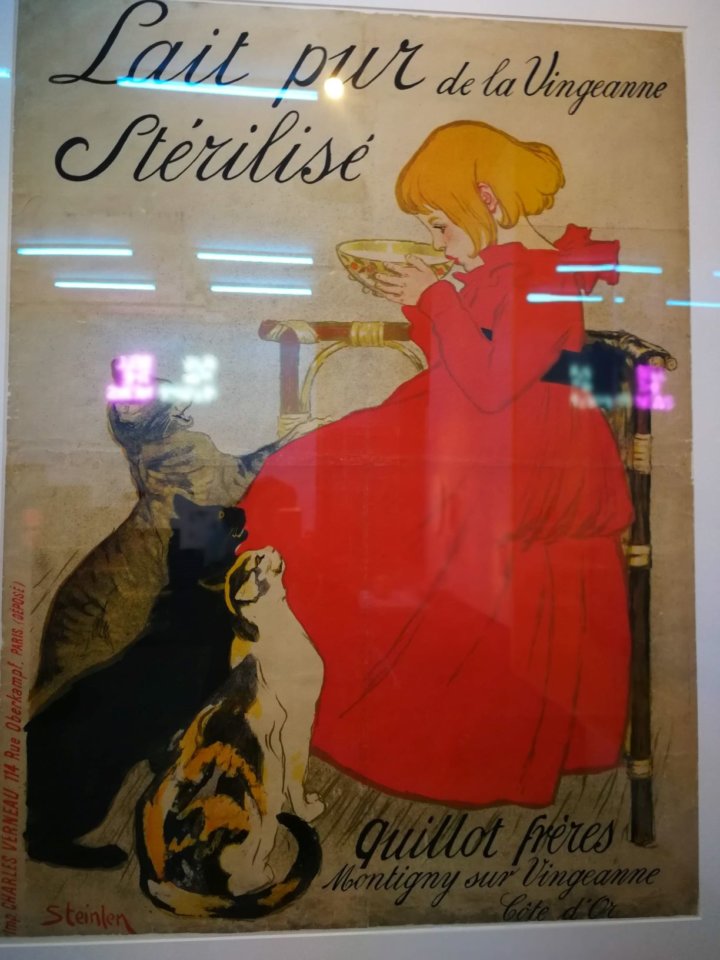 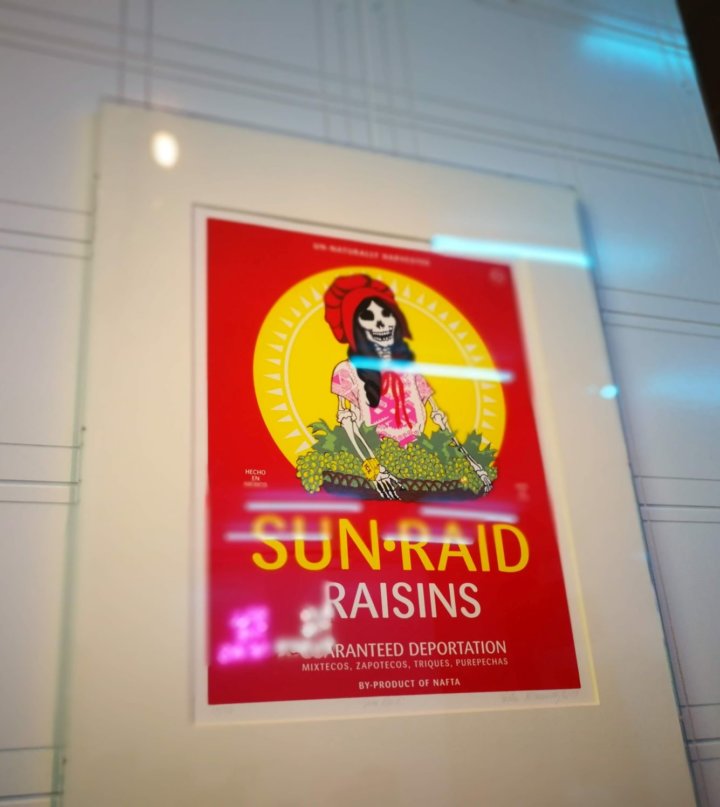 The start of the trading area displayed vibrant posters ranging from old French posters advertising milk and dairy farming, through to a more political collection from artist Ester Hernandez whose work wants us to look at the conditions of female farmworkers. Her “art reflects the soul and pain of farmworkers. She depicts their history and lives without despair as in California Special which shows a farmworker child in her flour sack dress and matching sack of flour“. 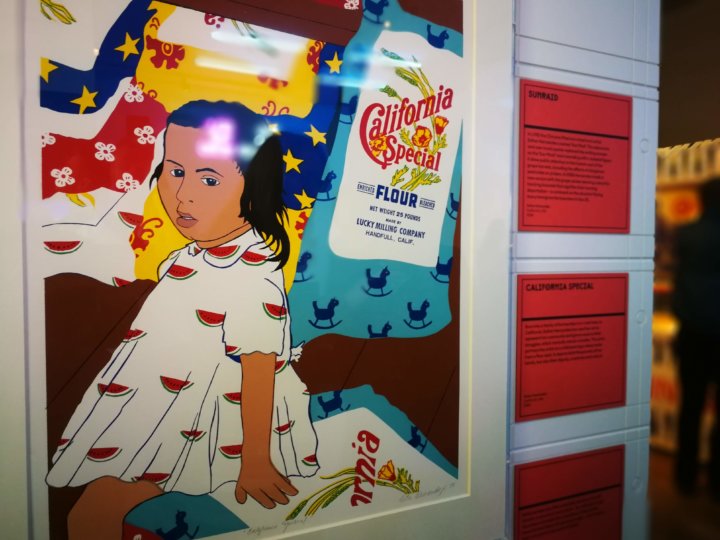 Moving onto the Farming section with its dazzling wallpaper from artists Fallen Fruit. The 12-metre squared wallpaper covered with fruit draws on the V&A’s collections and the horticultural history of the site. Apparently the site was once an important nursery for fruit trees. 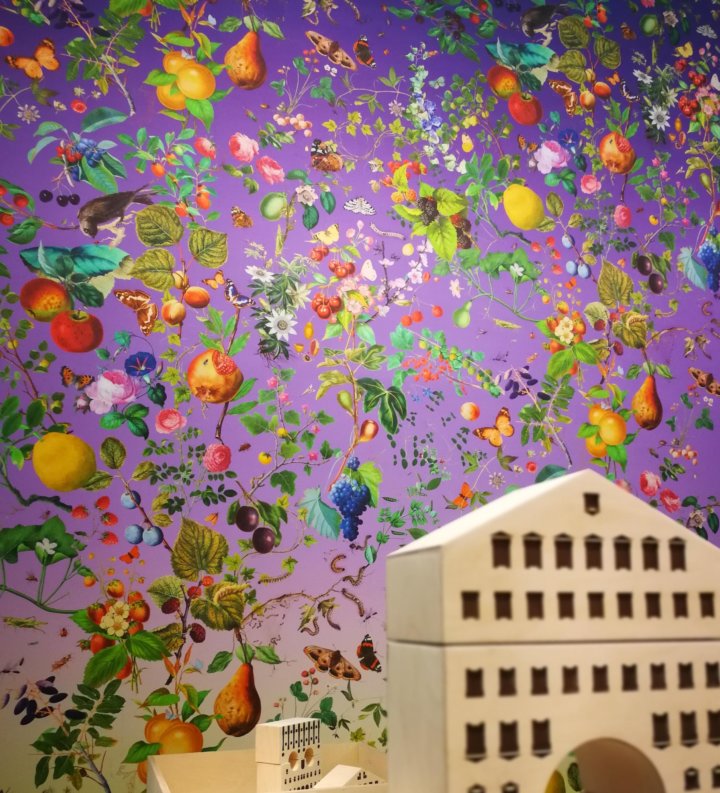 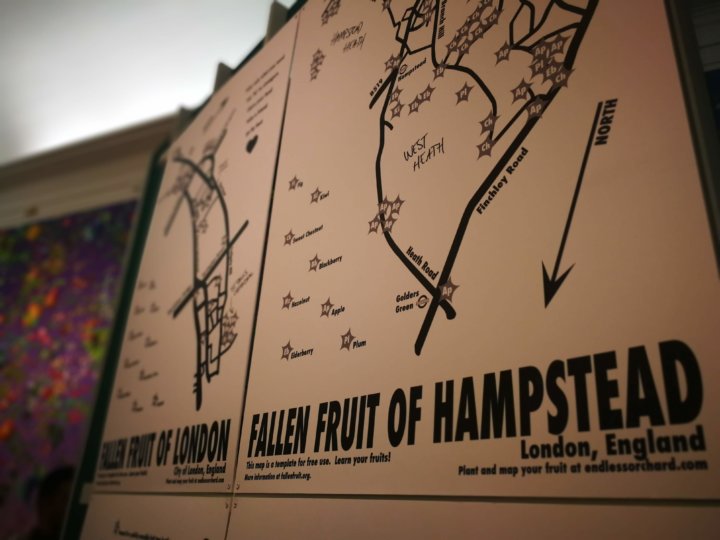 I loved their templates for maps showing areas where you could forage for fruit in London.  Each poster had the following advice on it: “Take only what you need, say hi to strangers, share your food, take a friend, go by foot.” 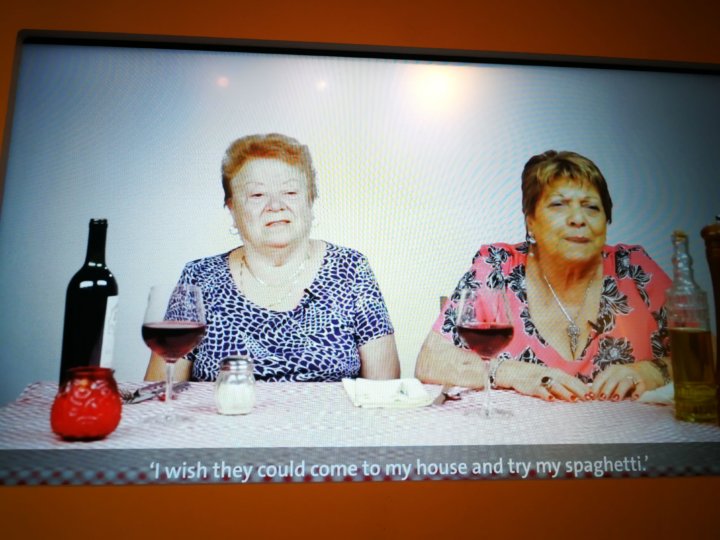 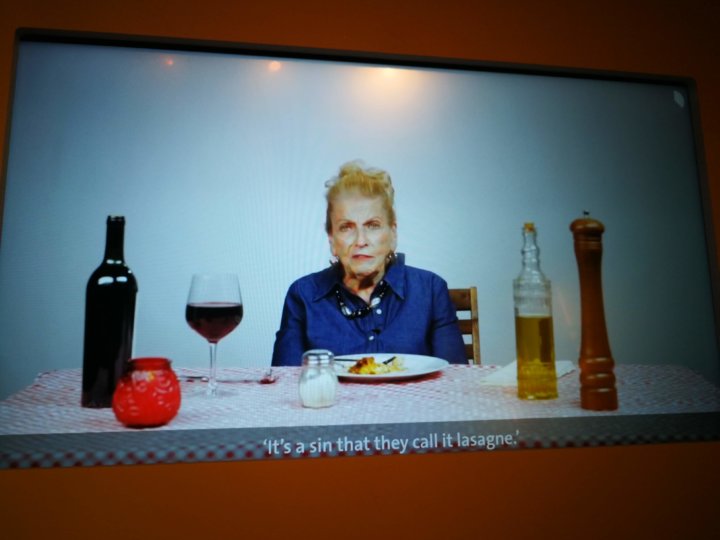 I spent the longest by far in the Eating section.  Not because there was lots to eat there, there’s hardly anything to eat in the exhibition, but because it was the most sensory part of the exhibition for me. I could have spent hours alone looking at the collection of cookery books. There were current recipe books from best selling authors like Jack Monroe, but also hand-written family recipe cook books, kindly lent to the museum.  Foodie internet stars including Italian Nonnas talking about pasta through to Instagram stars like Symmetry Breakfast were all represented in the room. 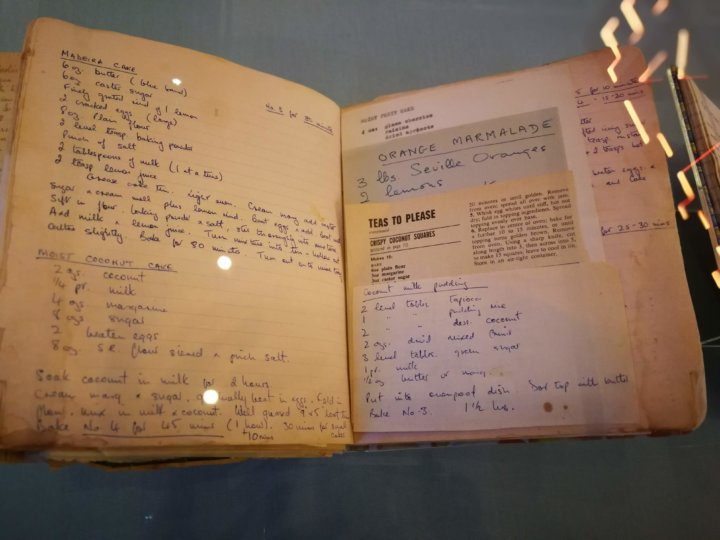 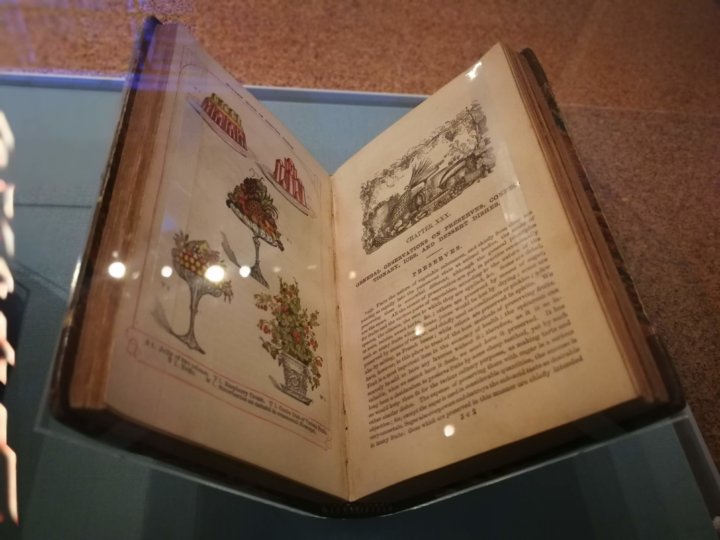 Other than the edible ticket and tasting some organic fruit cordial, I had eaten nothing and towards the end of the food exhibition you can be forgiven for feeling hungry.  So it was a delight to see a project by the Center for Genomic Gastronomy where you could select a range of “values” that were important to you from food systems, and a bespoke menu and a micro sample of food was created based on those values. 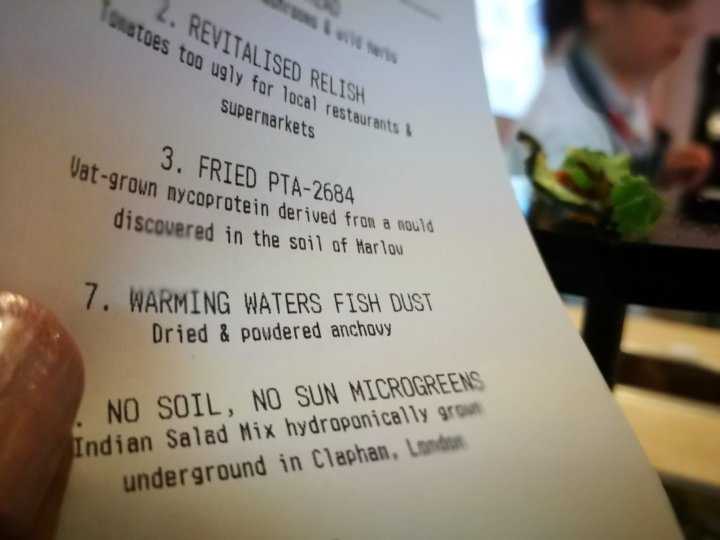 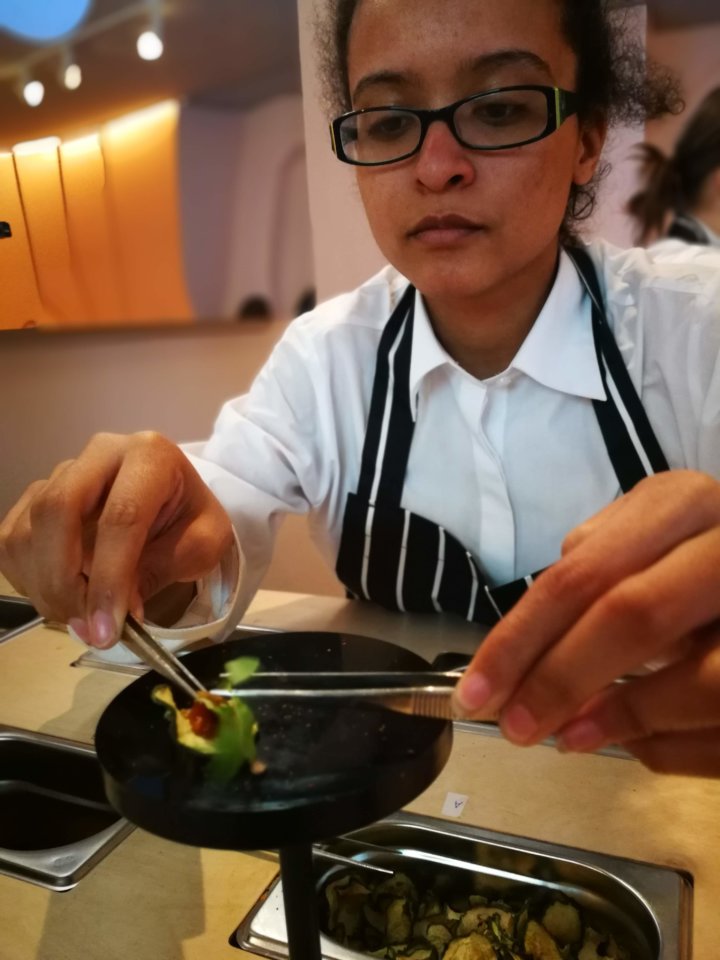 Zero waste is really important to me, along with delicious tasting and nutritious food. I entered those values into a computer was told that so far that 75 out of 1,745 visitors share the same values and I was given a canape made from tomatoes too ugly for supermarkets, along with an Indian salad mix & micro greens grown by Growing Underground in an underground bunker in Clapham. 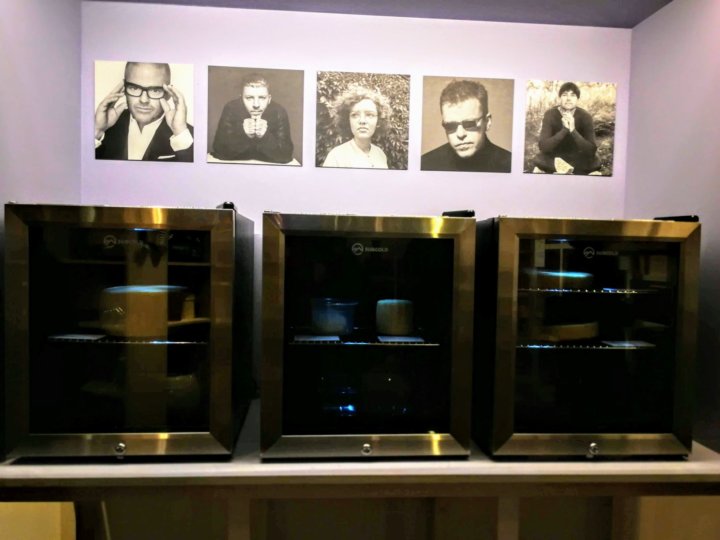 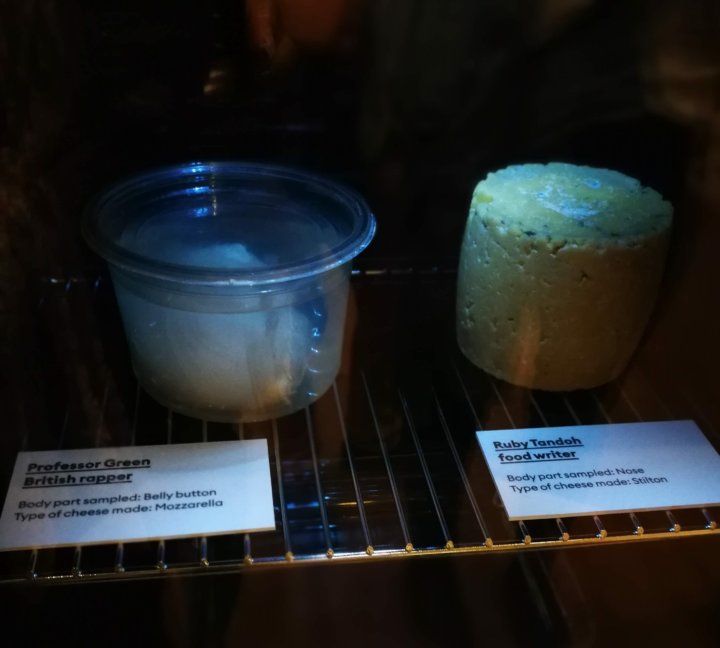 Onto the notorious human cheese. As food writer Ruby Tandoh said in The Guardian “anyone who has ever walked past a supermarket cheese counter will have smelled, the bacteria present on human skin, from noses and ears to feet, have much in common with those in the cheese we eat“.  Selfmade takes this a step further.  A collaboration between Food Busker John Quilter, biodesigner Helene Steiner, and scientist Dr. Thomas Meany, it is based on an idea originally conceived in 2013 by smell researcher Sissel Tolaas and biologist and artist Christina Agapakis.

We are “treated” to a display of cheeses cultured from bacteria samples taken from the armpits, noses and belly buttons & other body parts of  willing celebrities. There is cheese made from cheesemaker Alex James of Blur; British rapper & keen cook Professor Green; Ruby Tandoh (as already mentioned); Madness frontman Suggs; and most horrifically (to me at least) cheese made with Heston Blumenthal’s pubic hair.  Would you eat it? We are asked. By the grimaces of the faces of almost everyone reading the captions & looking at the cheese, the answer’s a resounding NO. 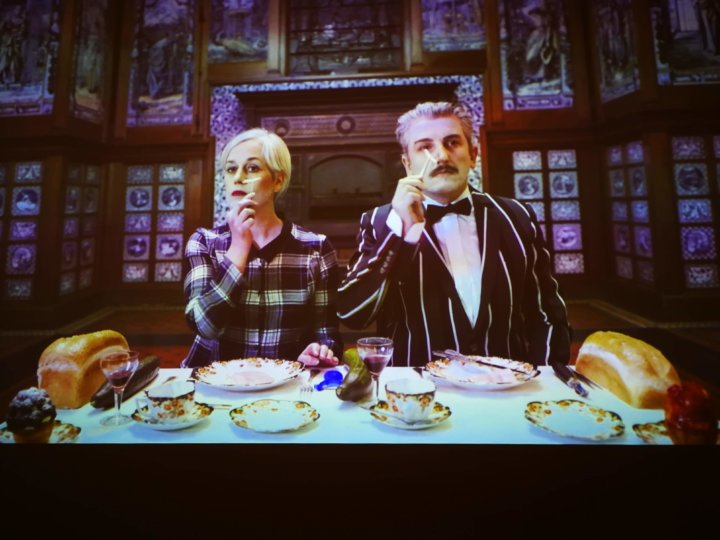 I was captivated by a short film towards the end of the exhibition on the future of dining.  A smartly dressed woman and man are sitting at a dinner table about to eat a feast. But rather than eat the food, they pick it up with tweezers and inspect it, then smell it and stroke it gently across their faces as though it is make-up.  Is this the supper club of the future? Many of us (myself included) are guilty of spending a lot of time taking photos of food before eating it for our social media channels. Farmers and food manufacturers are even producing food that is Instagram friendly.  Is food as perfume or make-up the next step? 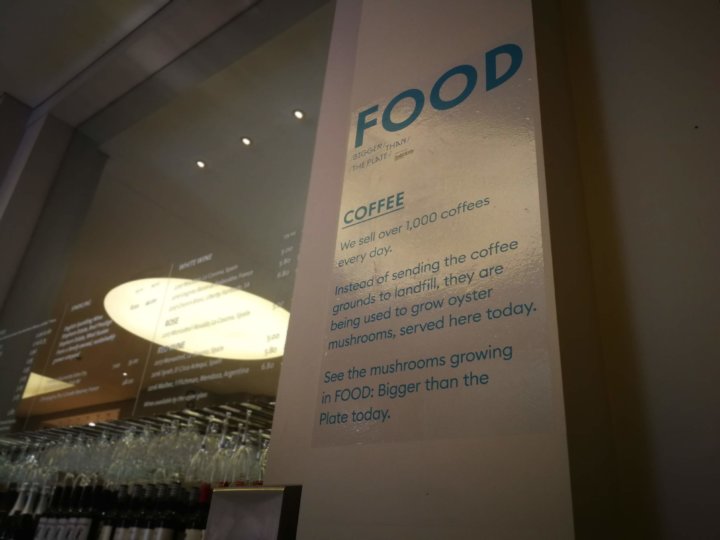 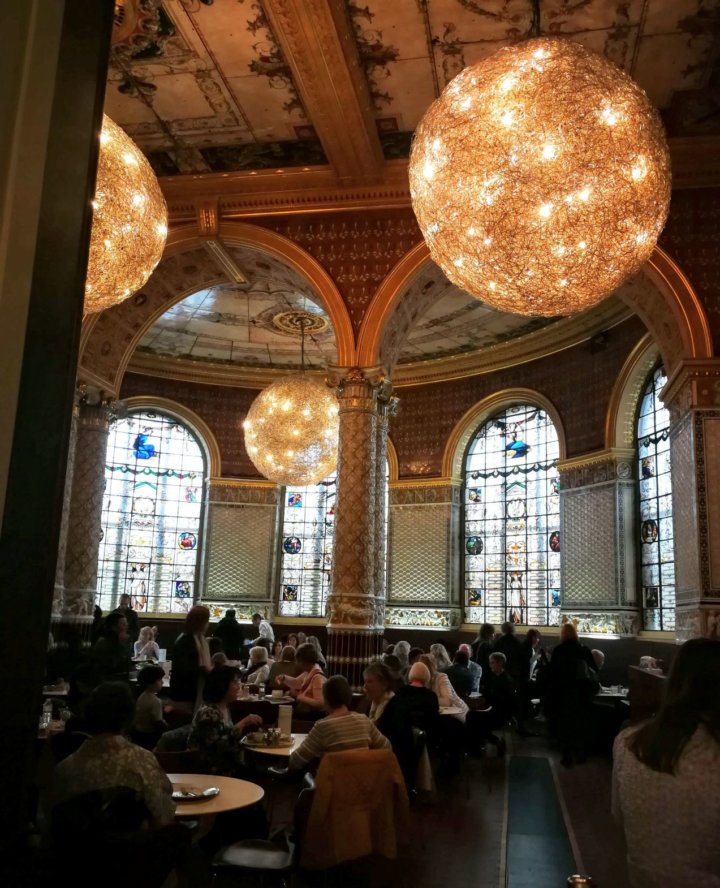 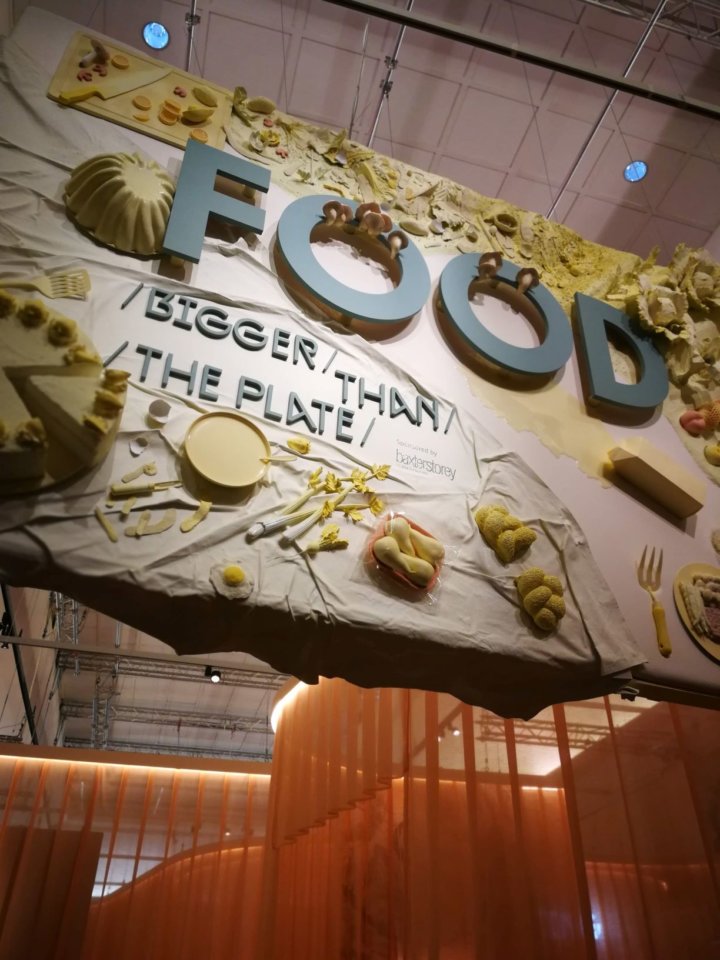 After leaving the exhibition you’ll find yourself very close to the V&A’s beautiful restaurant – the world’s oldest museum restaurant with its stunning period details and stained glass windows.  At the coffee bar is a reminder of those oyster mushrooms grown from used coffee grounds we saw at the start.  The museum’s restaurant & cafe sell over 1,000 cups of coffee a day and those used grounds go on to grow the mushrooms which are used in some dishes on sale there.  This circular use of wasted “food” going on to produce “new” food was a very fitting end to a show that truly makes us explore & think about each stage of the food system.

Food: Bigger Than The Plate‘ is at the V&A Museum until 20 October 2019 and is co-curated by Catherine Flood and May Rosenthal Sloan. Apply promo code FOOD40 at the checkout to redeem our early bird offer of 40% off individual advance tickets (available for a limited time only).

If you’re interested in the future of food and the sustainability issues around it, we ran an event on this in June – see what happened at our Sustainable Gastronomy Day supper & panel! You can also read more about our event Doing Good with Food which we ran as part of our week long series of International Women’s Day events.