Great British Menu (GBM) returns to our screens on 1st February 2022 for series 17. The BBC Two show puts the nation’s most talented chefs to the test. At Women in the Food Industry we are interviewing the strong female line-up of chefs from across Britain competing to serve their dish at the final banquet. To kick start the series, our co-founder, Mecca Ibrahim, interviewed Sally Abé, chef consultant at The Pem Restaurant in the Conrad London Hotel in St. James’s. 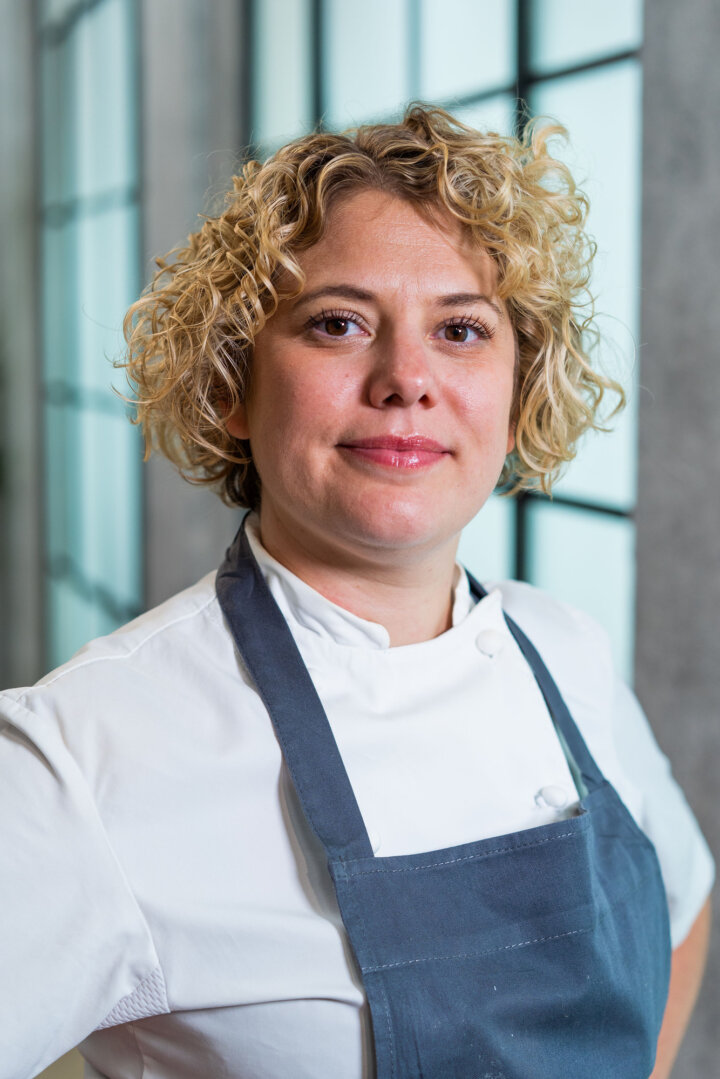 I started cooking at home and when I was 18 I got really into it. I decided to pursue a career in food and went Sheffield Hallam University to do a hospitality degree. I came down to London as part of a sandwich course and my first job was at The Savoy under Marcus Wareing. I then went onto Claridge’s which I count as my training. 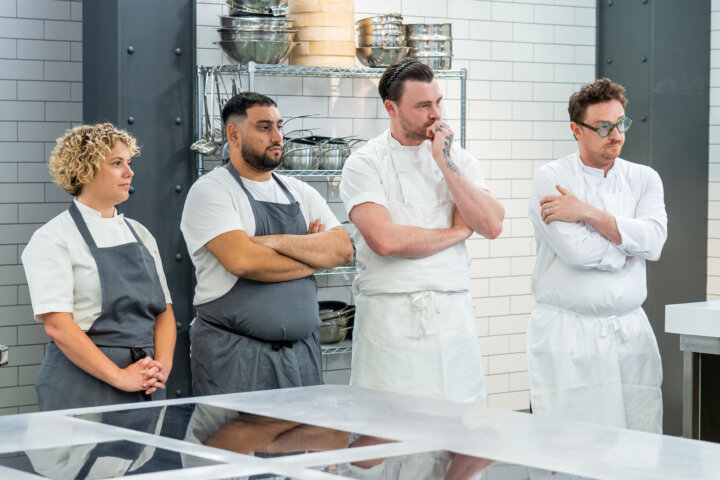 I’ve got such a good relationship with all of the producers after being on the first time in 2020 (The episode aired the day before we went into lockdown), so we all kept in touch.  I let them know that I’d be keen to do the show again, and they invited me back. 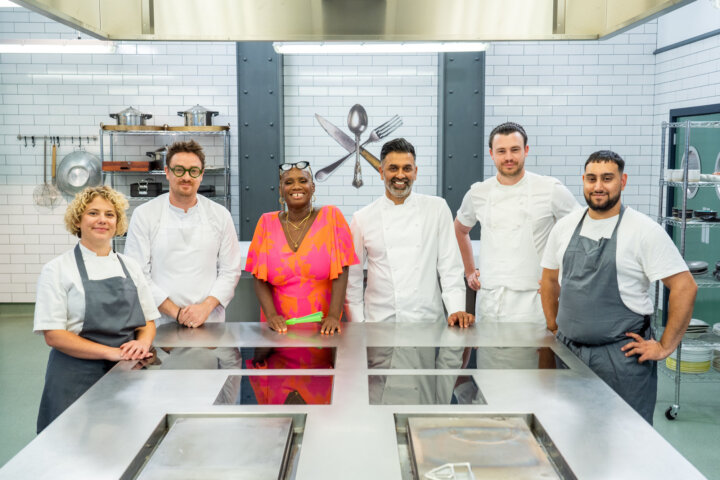 What was it like filming with the COVID measures in place?

The whole world has COVID procedures in place now and they were all very professional about it all. There were daily temperature checks and frequent lateral flow and PCR tests. 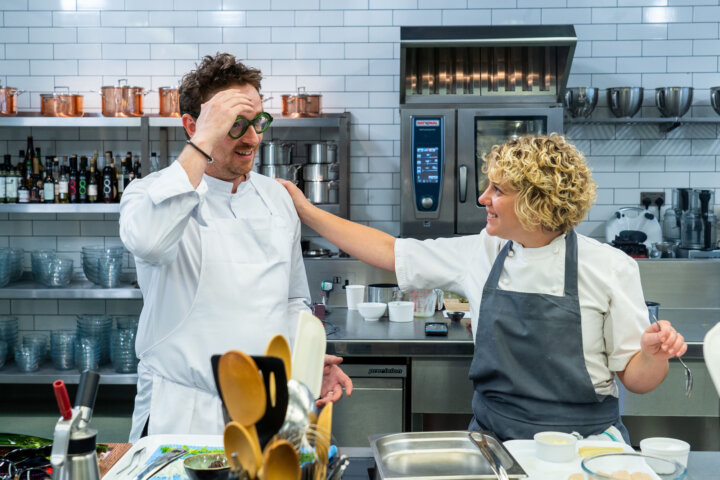 How did you prepare for the broadcasting theme at GBM?

Obviously being British and growing up in the 80s and 90s in the UK there was a plethora of TV shows to choose from. My food is a lot about nostalgia anyway. So working that nostalgic flavour into food was a good brief for me.

Probably my starter. It’s so hard to take a television programme and make a dish out it. It was important to make the dish instantly recognisable without relying too much on props. The other three dishes came quite quickly to me but the starter took the longest. But in the end I was really pleased with it.

I did to a certain extent, but I wanted people to be able to look at plate of food and still be able to understand what it was I was trying to get across without props getting in the way. There are definitely some props but they’re not all singing and dancing! 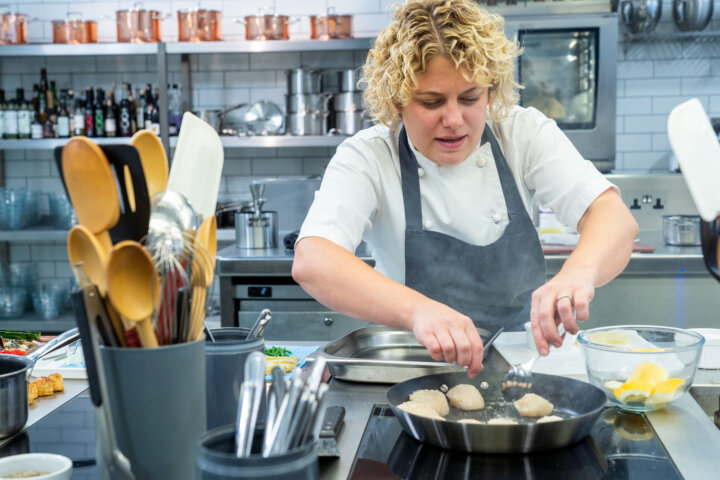 In your own kitchen you have more women in the kitchen than men, but in the show you’re competing against three male chefs for your region.  What was that like ?

I knew Ben from Lucky Cat but I didn’t know Harvey or Liam. But they were a really good bunch of boys and they were nice to work with. I’ve got so used to working in a balanced kitchen, so it was a bit strange being the only female in the room. The guys were nice but obviously it’s different. Although everyone likes to pretend we are on the way to being equal. That’s not the case in reality and we have to keep on fighting the good fight! 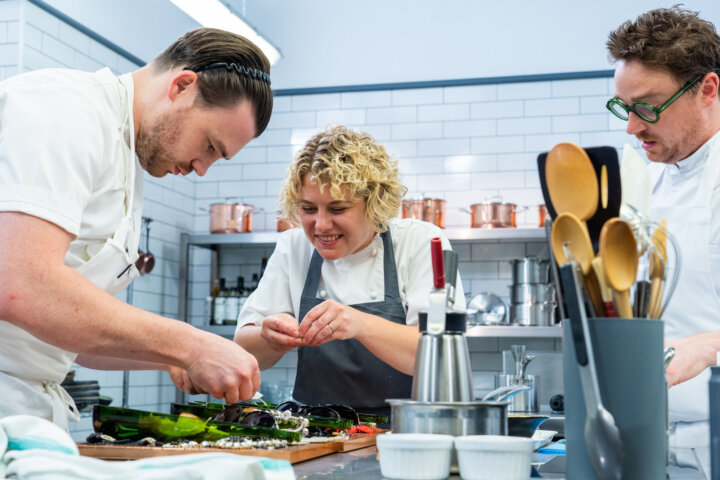 It would have to be Brett Graham. I have worked with him for about 8 – 9 years now and he’s definitely been the biggest influence on my career.

Well this is difficult, as my death row meal would be mashed potato and gravy. But if I on a desert island that might be a bit too hot. Can I say Pina Coladas?! Does that count? Well I like to keep things simple. I suppose if I was marooned on a hot desert island, I’d go for a Caprese salad. Tomato, mozzerella and basil, you can’t really go wrong with that.

Believe in yourself that’s the biggest thing.