The Future of the Drinks Industry – Review of Imbibe Live 2019

1 – 2 July 2019 saw the 10th anniversary of Imbibe Live, one of the UK’s biggest on-trade events for the drinks and hospitality industry. Attracting thousands of visitors each year to Olympia London, our co-founder Mecca Ibrahim went along, keen to discover the latest trends.  She didn’t quite expect to see that the future of the drinks would mean less alcohol, more sustainability and an industry catering to future drinkers looking to get their kicks less intoxicating ways. 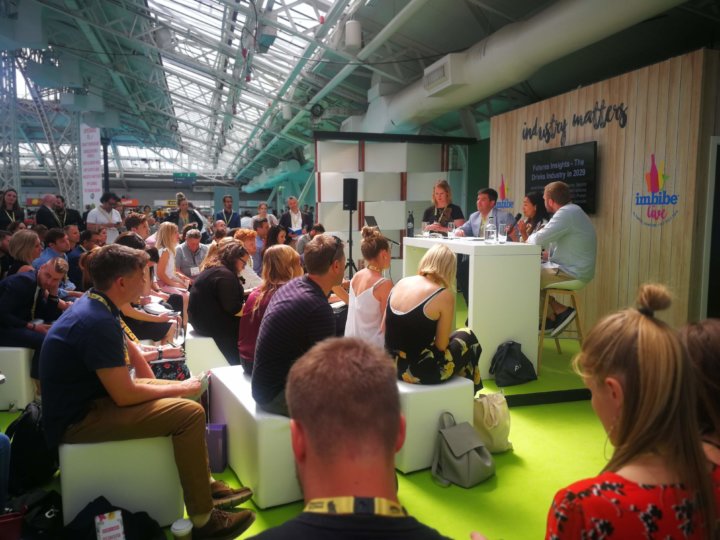 After collecting my badge, I walked straight past the many gin, wine, cocktail and beer stands and headed to the Industry Matters panel to see what the experts predicted for the drinks industry in 2029.  There were mentions of expected futuristic things such as Virtual Reality bars and seamless/frictionless ordering of drinks. Also as expected bars that are not bars

However, Will Rowe of insights agency Protein found that younger drinkers are drinking less alcohol. He said that  Generation Z – that’s people who are younger than Millennials – are not really interested in alcohol as a way of letting their hair down and becoming more social. Over half are drinking less or have stopped drinking entirely. Where does this leave the drinks industry?

‘The non-alcoholic space will see premiumisation,’ said Ara Carvallo, the new portfolio director of Distill Ventures the world’s first independent drinks accelerator, dedicated to helping founders build, scale and sell the drinks brands of the future. ‘There will be a switch from soft drinks to beautiful non-alcoholic cocktails.’ 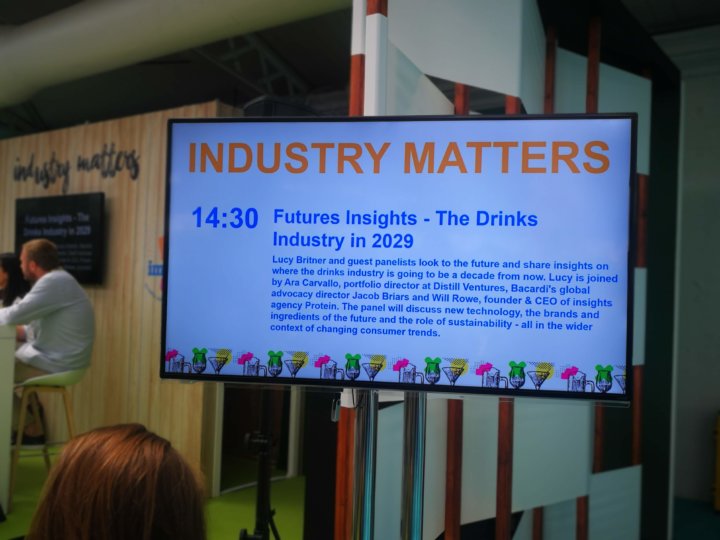 However, a trend we are seeing in many areas is the importance of sustainability, which is just as important to people buying drinks as with food. The war on straws is possibly one of the strongest areas of sustainability in the drinks world, but it also extends to looking at a product’s carbon footprint.  We saw evidence of this at the V&A’s excellent Food Bigger Than The Plate exhibition where machines can record the provenance of a product, whether the producers were paid fairly and the transparency of the carbon footprint of the product all from a simple QR code. 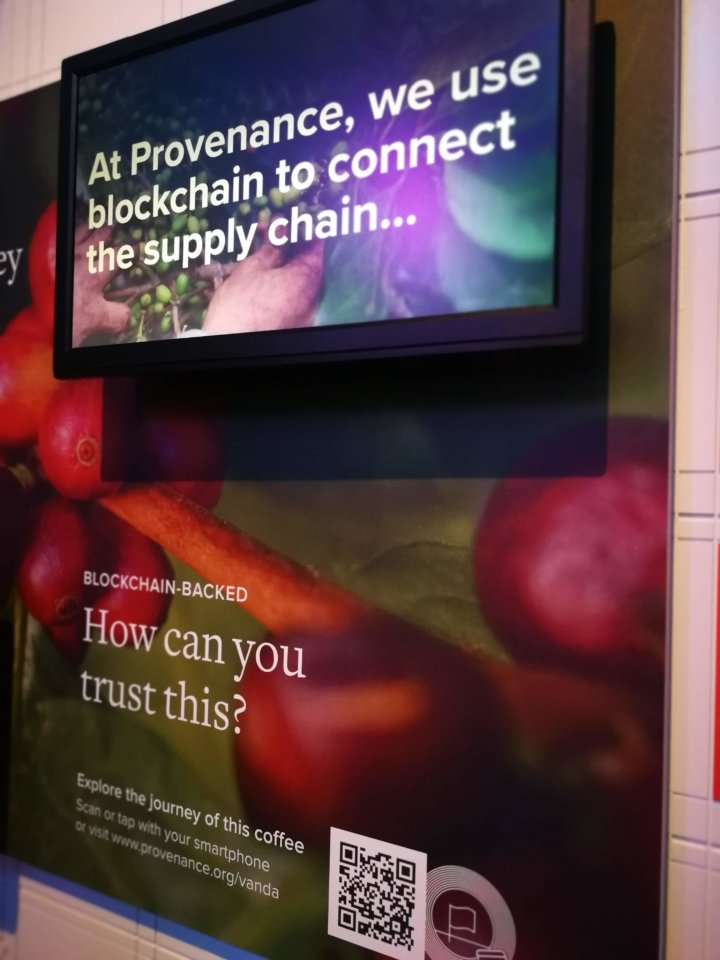 Speaking of that war on straws and its role in the wider war on plastic, I was delighted to see a stand selling pasta straws.  Stroodles last for at least a full hour, they are flavourless, biodegradable (wheat + water), zero-waste and you can take them home and cook them after you’ve finished sipping your drinks through them. 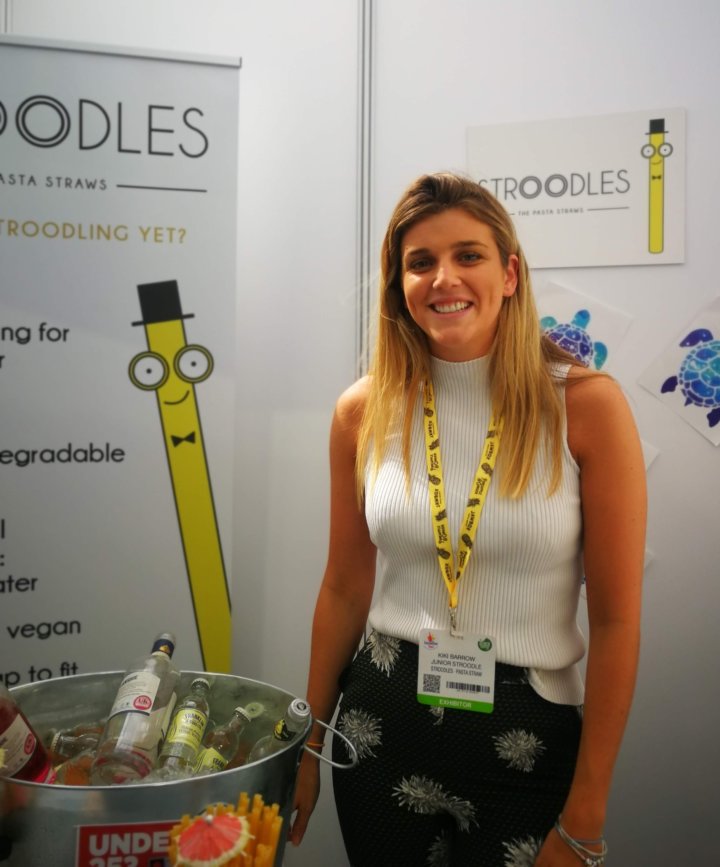 There were many low alcohol stands such as Silver Swift, which are also vegan, gluten-free and marketed as “guilt-free” with fun names like Basil Blush. With added Vitamin C and no other nasties they’re clearly designed to appeal to the Generation X market of “healthy” drinkers. 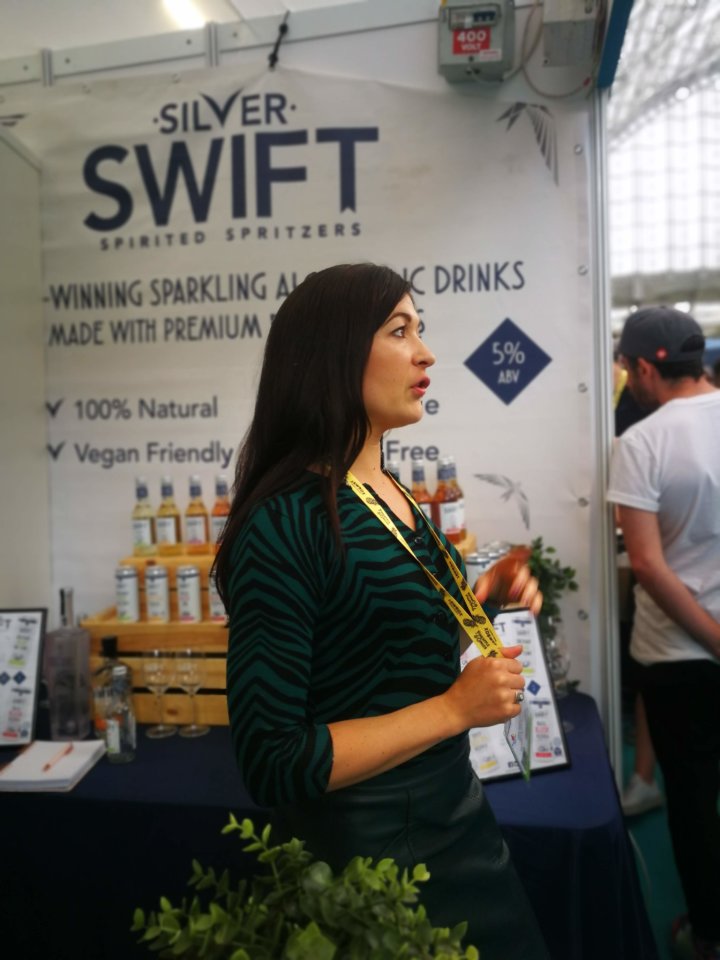 Wine expert Jane Parkinson, one of the wine reviewers on Saturday Kitchen, was also at the show, leading a tutored tasting of the low or no alcohol drinks. She sees this move towards less booze as more than a trend, with supermarkets recording higher sales of low alcohol drinks and “Moderation occasions” becoming the new buzzword. 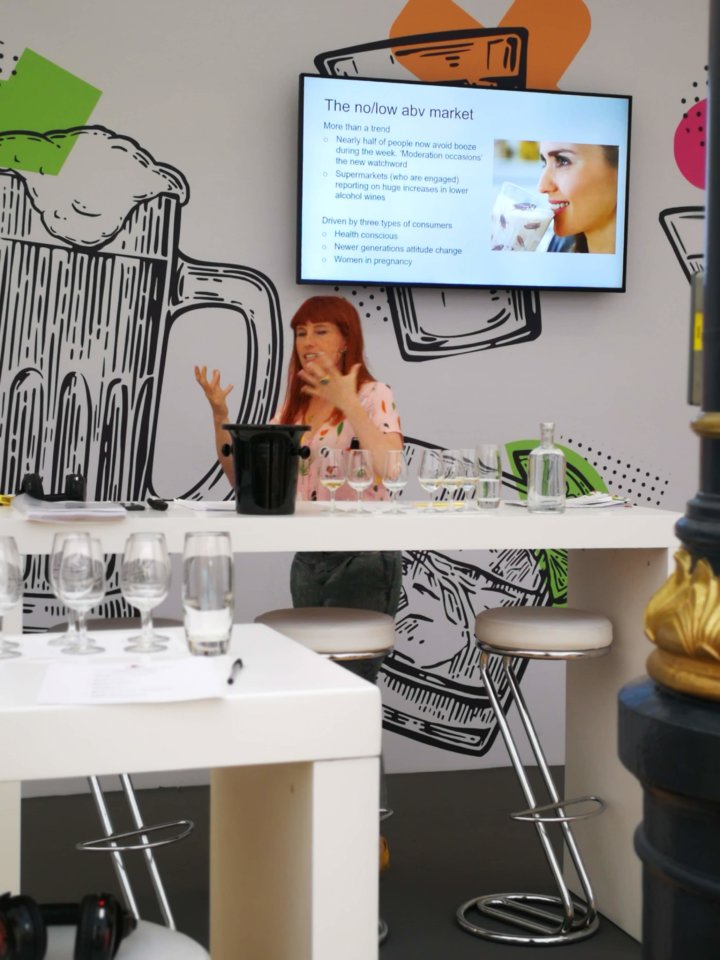 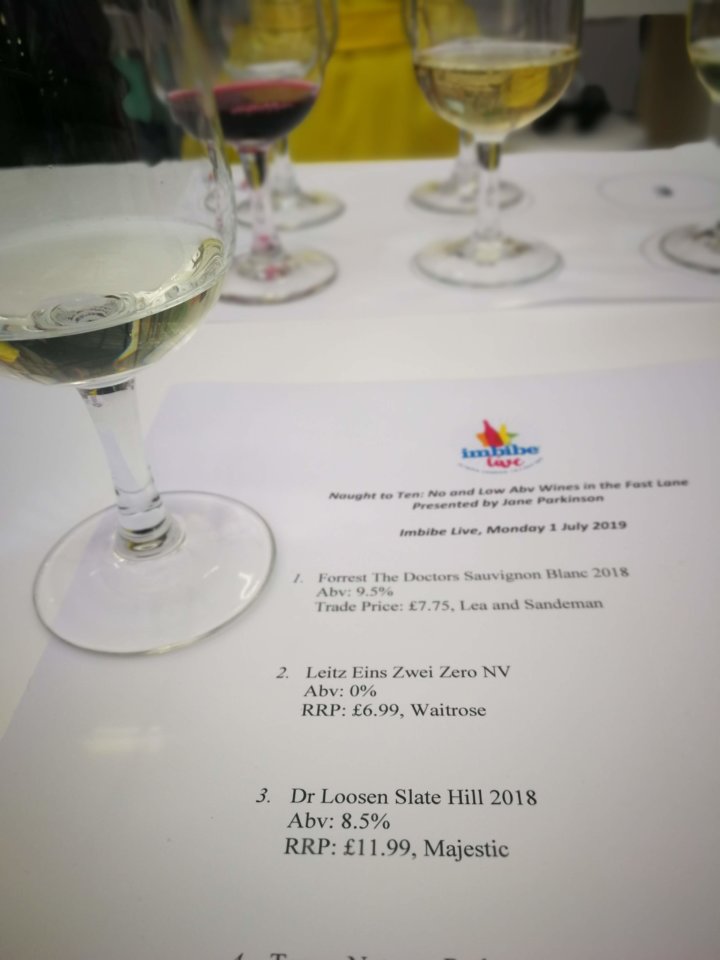 We tasted wines with less than 9% abv, and even some “wine” with no alcohol.  Apart from a super sweet mock champagne (which was truly awful in my opinion) the low alcohol wines were all pretty acceptable and a good way to indulge in drinks which tasted great, but wouldn’t make you intoxicated or hungover the following day. 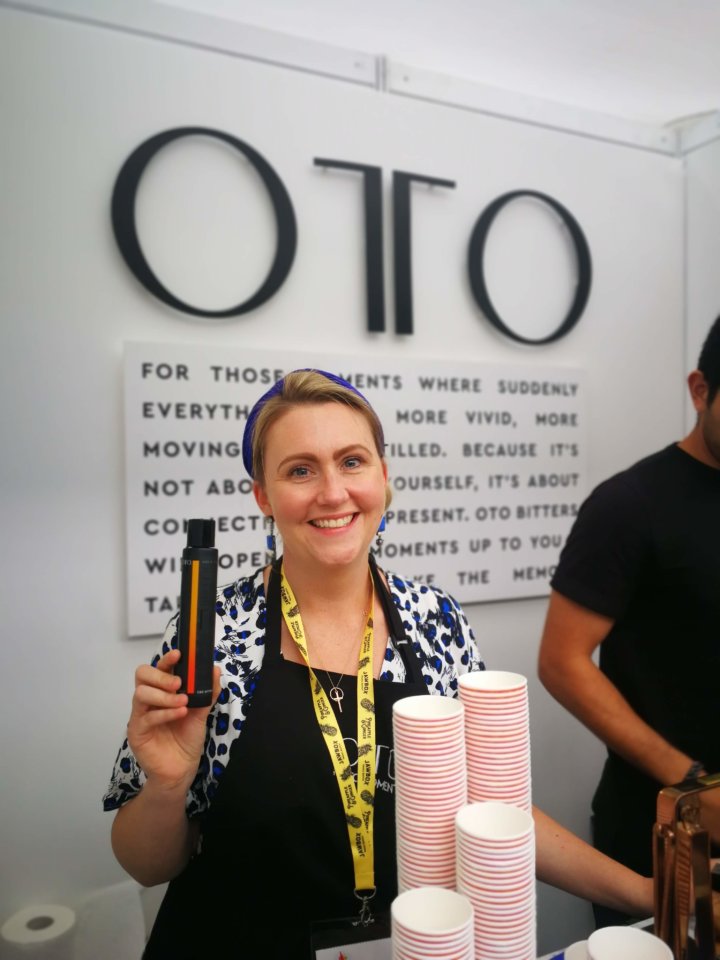 The growth of CBD was mentioned in the future of drinks panel and while making the rounds of the exhibition I found a stand promoting CBD drinks.  OTO CBD Bitters are designed to add zing and great flavour to beverages claiming to give our bodies a much needed boost – all without the need for intoxication.

OTO is a group of passionate, talented friends who sought to use the power of CBD to help themselves and others. Based in Hammersmith their philosophy is one of ‘healthy hedonism’,  They are working with Cami Vidal – yoga teacher, cocktail expert, wellbeing advocate and the founder of La Maison Wellness. She designed a range of cocktails for the show to “focus the mind, balance the body and amplify the moment“. Watch this space for an interview with OTO’s Managing Director, Gemma Colao pictured above. 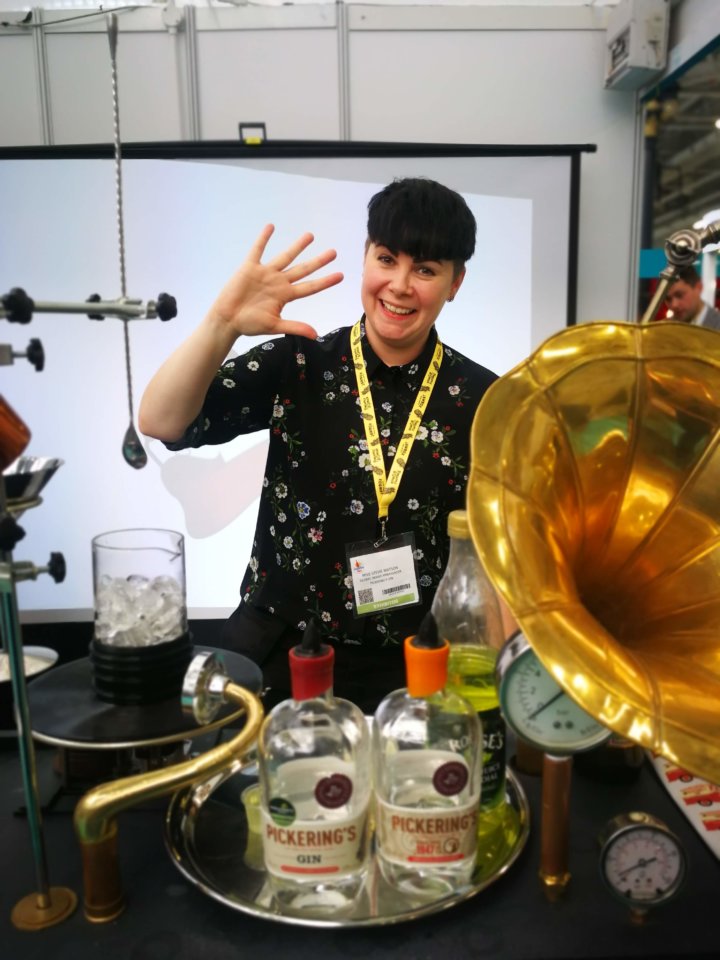 I didn’t abstain totally from alcohol and was drawn to Pickering’s Gin stand where Global Brand Ambassador Stevie Watson, was making gin gimlets by “mixing them” on an old gramophone player.

Self-confessed “gin nerd” Stevie, “tastes, teaches and talks Pickering’s all the way from London to Beijing“. I’m hoping to catch up with her for an interview on what it’s like to drink gin for a living! 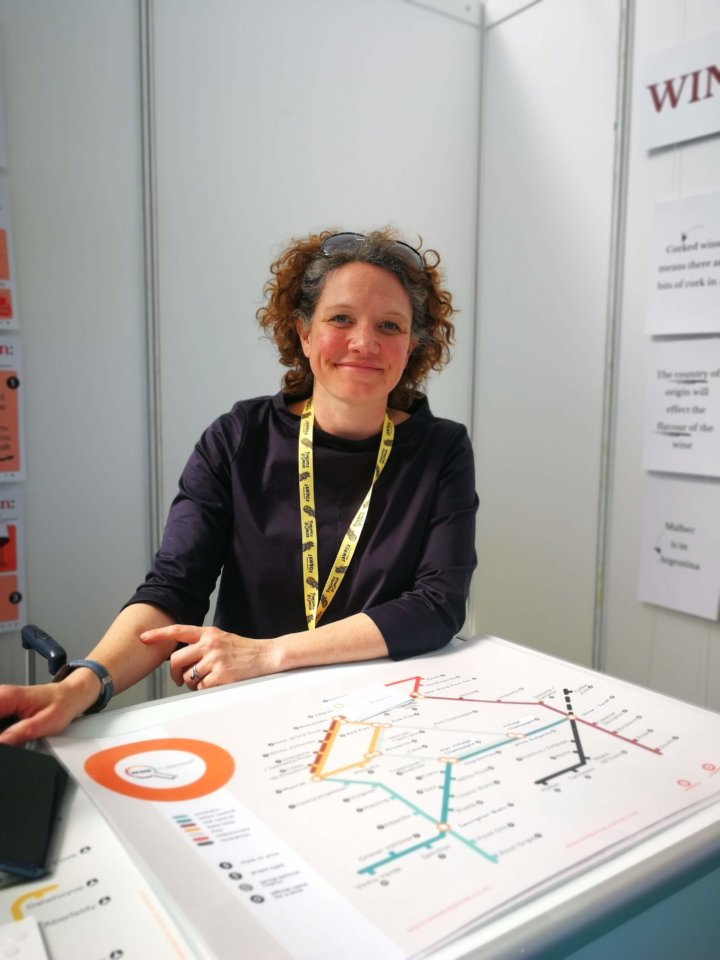 Coming towards the end of Day 2 my eye was caught by a number of “wine myths” posters on a stand on the upper floor.  These were from a new company Quenchable, founded by Nikki Welch who had previously made WineTubeMaps. Quenchable is a new hospitality training tool, which made its debut at the show and is designed to give front of house teams the confidence to serve wine, whisky and beer with ease and help upskill teams who may not know as much about the drinks as their customers. 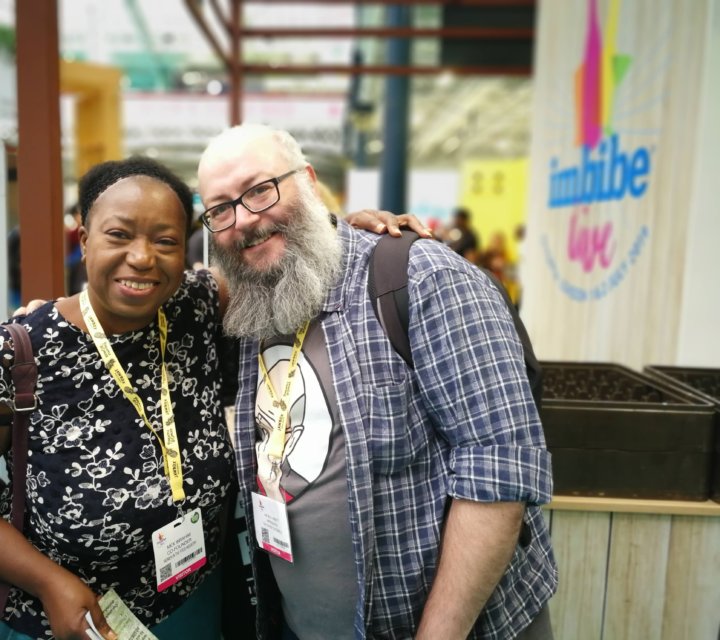 Finally, I bumped into an old friend Billy Abbott, who has been writing for The Whisky Exchange since 2011.  As part of his job is “roaming both the internet and real world, telling people about the wonders of drinks”, it was only a matter of time, before I bumped into him at Imbibe Live.  Earlier in the day he had been giving a masterclass in whisky at Imbibe Live and he’s now introduced me to a number of women in the spirits world who we hope to interview here. 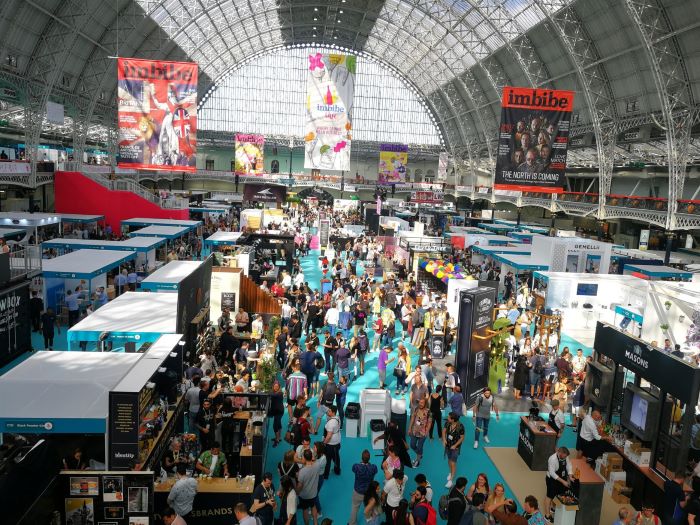 Watch this space for various interviews with women in the drinks industry. In the meantime you might like to check out our interview and podcast with Helena Nicklin award-winning wine and spirits writer and one-third of The Three Drinkers on Amazon Prime.  Plus we look back to when Andi Oliver chaired our Women in Food & Drink Panel and Tasting Experience for International Women’s Day.