Expect the unexpected.  If you’re a fan of food and food photography, you may be excited to hear there is a new exhibition at The Photographers’ Gallery in London, exploring the rich history of food photography.  Our co-founder, Mecca Ibrahim, went along to Feast for The Eyes, with a number of expectations. Discover what she thought of gallery’s take on the development of food photography and the artistic, social and political contexts that have influenced it. 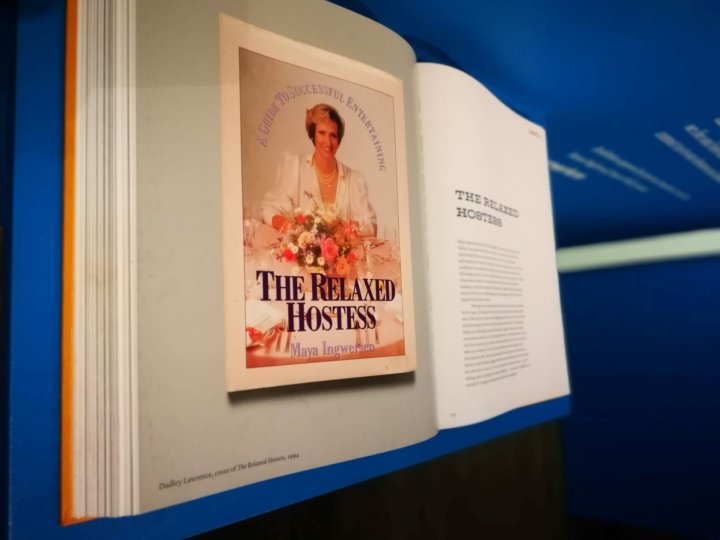 “Food – and how it is photographed – defines how we live and how we value ourselves, and, at its very best, connects us to our dreams and desires.”  says Susan Bright the co-curator of the exhibition.  Split over two floors and featuring over 140 works, the exhibition is arranged around three key themes: Still Life, Around the Table and Playing with Food. There are a very broad range of artists including very big names in photography such as Martin Parr, Man Ray, Henri Cartier-Bresson and Cindy Sherman, through to some female photographers & artists whose work I had not heard of before – Sarah Lucas,  Laura Letinksky, Nan Goldin, Mickalene Thomas and Sharon Core.  Although some of the most interesting work for me was the many “photographer unknown” pictures in the exhibition of which I’ll come to later. 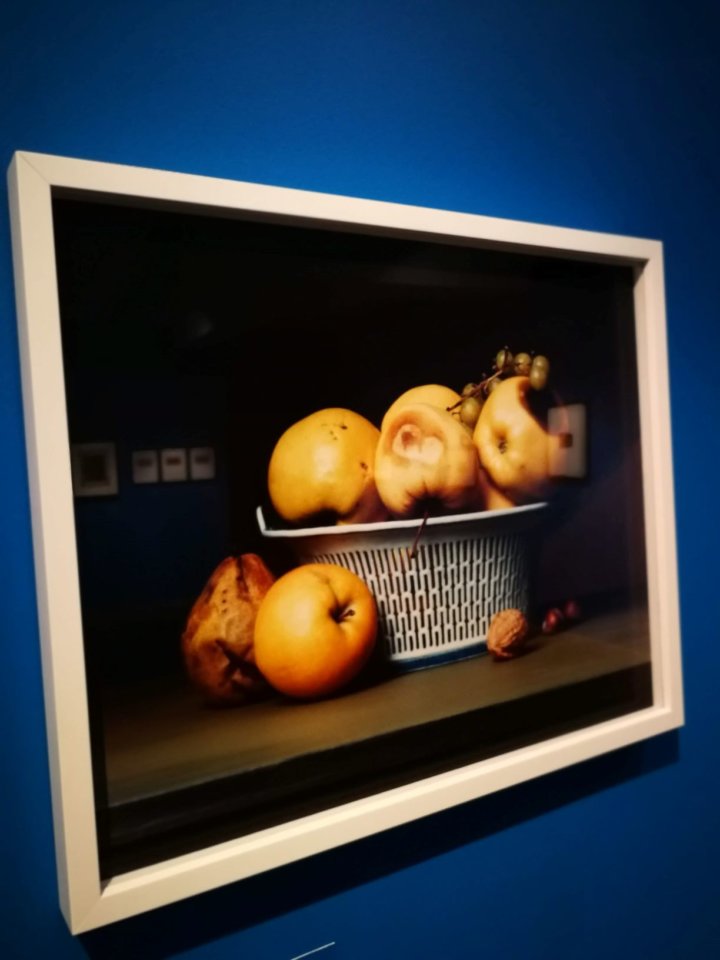 Still Life – the blue section – traces food photography’s relationship with a genre that we are very used to with painting. But it looks at how that age old tradition of taking pictures of bowls of fruit, game and feasts has changed over time. Sharon Core’s work (Apples in a Porcelain Basket – pictured above) is a good example of how the food photography in this exhibition plays with our expectations of food as an art form. It’s never really straightforward. Sharon Core mirrors the work of still life old masters, yet it’s photography and she hunts down  antique crockery to reproduce the pictures faithfully. It’s a very physical bowl of fruit yet is imperfect with its scars and rotting parts.

Around the Table (the yellow section) is on two floors and looks at the rituals that take place around the consumption of food. It’s about how our identities are revealed through who we eat our food with.  There’s a number of brilliant pieces by Martin Parr. I loved his untitled photograph below of women grouped together grabbing hot dogs after swimming. There’s also some social media friendly pictures of beans on toast and fondant fancies that you can imagine people posting on Twitter with “watching #Masterchef here’s my supper LOL” captions on them. 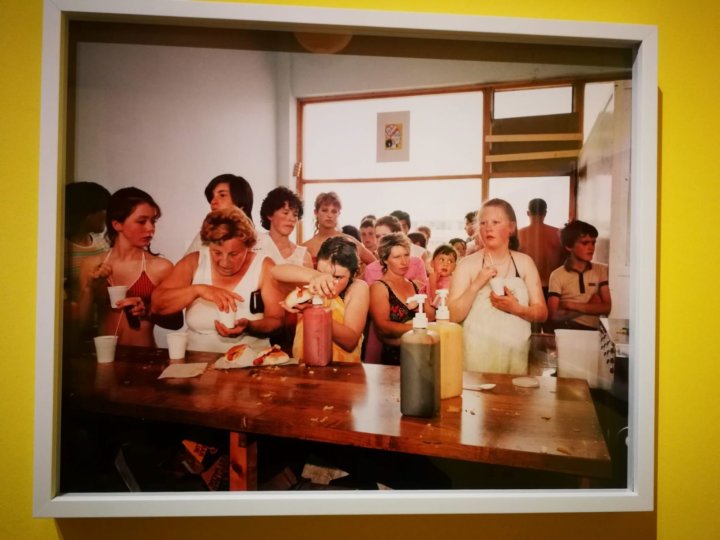 Close to that section are a number of cookbooks which almost form a section in their own right. Again, I’m a huge fan of old cookbooks. Most of the ones in the exhibition are from when illustrated cookbooks were at peak after the World War II.  The books all have that idealised notion of plenty. A post war era which promised to lighten the load of women in the kitchen,  but at a time when many places were still struggling with food shortages. The booklets and cookbooks offered a way forward, showing that a banquet was still possible, with photography giving housewives the chance to dream. 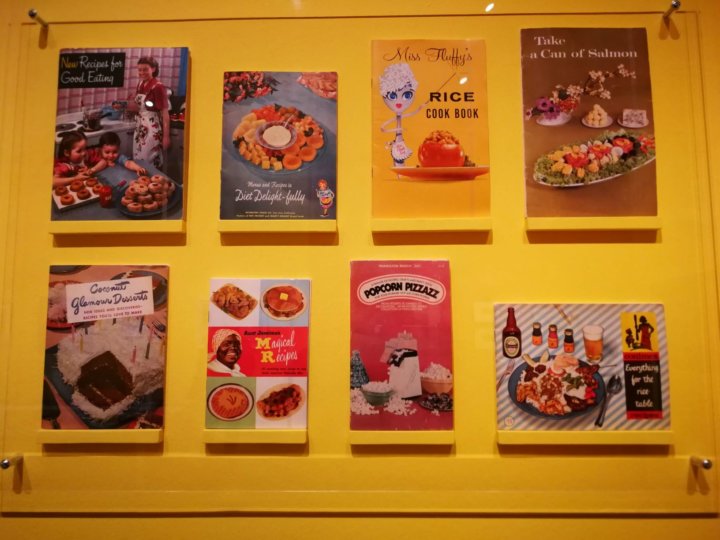 One of my favourite areas in this section was a wall full of WeightWatchers recipe cards, all displaying the best (or rather worst) of 1970’s food.  Most of the food is forced into  weird and less than wonderful shapes. The food styling is the stuff of nightmares with mysterious props and enticing titles. 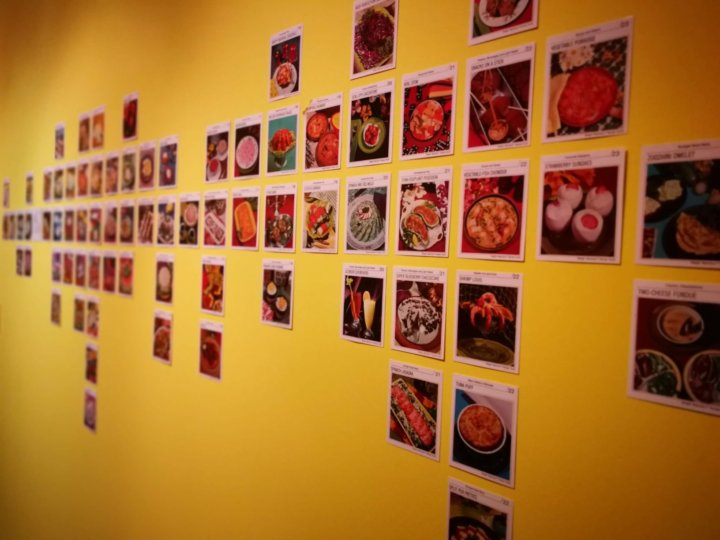 The names of the dishes are as mysterious as some of the props and there’s a wonderful use of inverted commas in the hope of making some of the dishes sound like healthy versions of their calorie laden counterparts. This is the antithesis of current day food photography. Now the photographer’s aim is make you fall in love with food and want to lick the screen. Here you would be hard pushed to ask for seconds (let alone firsts) of the dishes such as Chocolate “Pie” and Cucumber “Cream” Salad. 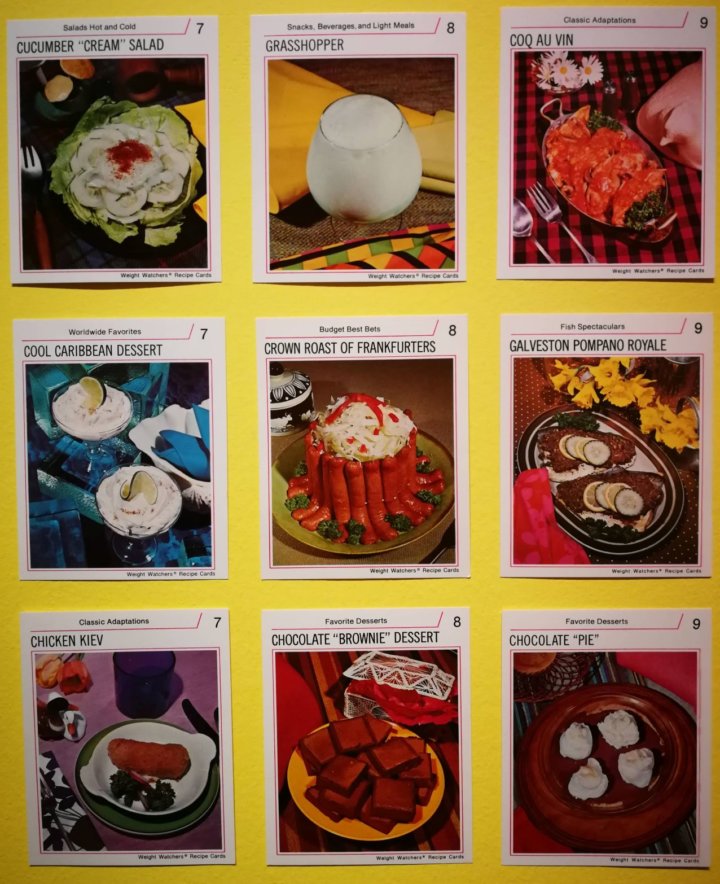 The final section, Playing with Food  (the red section) shows what happens when food photography is mixed with irony, humour and fun.  This section really deals with the senses too. The focus is on how food smells, feels or sounds. There’s a video of an artistic food fight “Meat Joy” from 1964 by Carolee Schneemann— where people (including Carolee herself ) are covered in paint, paper and writhe around on the floor together, playing with raw fish, meat, and poultry. 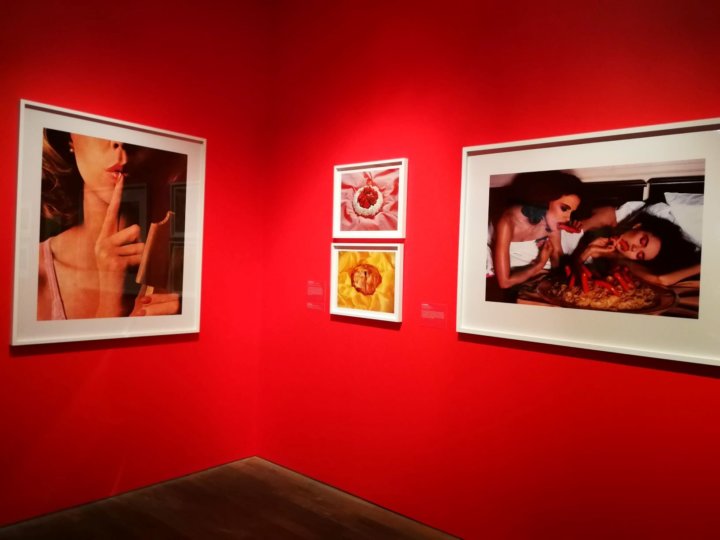 Here you see some of the more striking and memorable images. The work of Jo Ann Callis  – the pies in the middle of the image above –  came from a commission by not for profit photography community Aperture (the co-sponsors of the show) asked a group of photographers for their favourite recipes and food-related photographs to go with them.  Many of the images in this section link food with our thoughts on consumption, desire, pleasure, and taste. 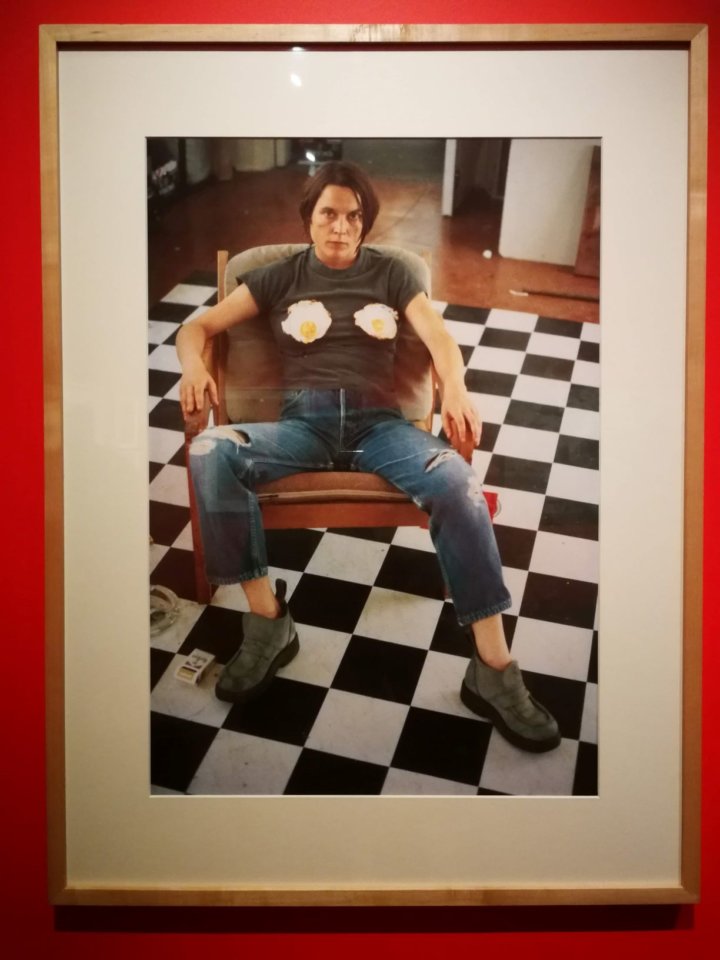 Another bold image that stops you in your tracks is Sarah Lucas ‘Self Portrait with Fried Eggs’.  The caption of the photograph says “In response to 1990’s lad culture which also coincided with the rise of celebrity chefs like Marco Pierre White and Gordon Ramsay, British artist Sarah Lucas employed food such as bananas, fish, and chicken in her photographs and her sculpture, to call out the base language used to refer to women’s bodies, and also reclaim it.  In doing so she takes the eroticism of food and turns it into sexual politics instead“. 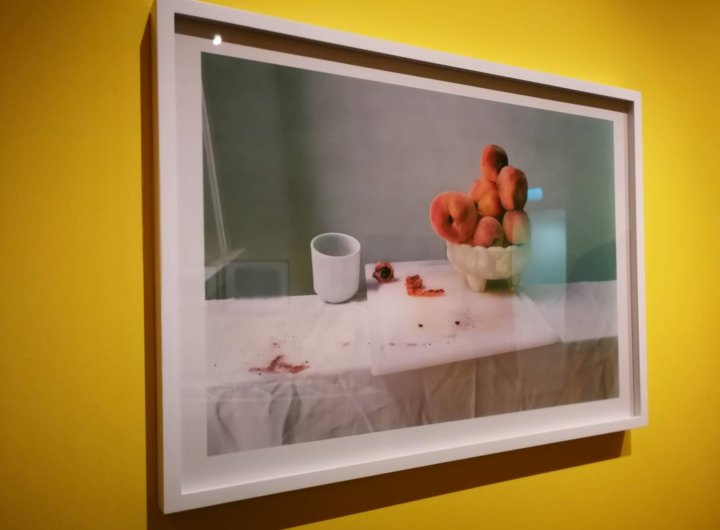 If you go the Feast for The Eyes expecting lavish perfect food photography which makes you hungry afterwards, in my view, you won’t get that.  Granted, some of the food photography is beautiful, but in the main it is thought provoking, shocking and sometimes quite sickening (I literally couldn’t look at Cindy Sherman’s photograph). It certainly made me re-think food photography as more social commentary, than art form.  It has the ability to be more journalistic than something purely designed and filtered for Instagram or Facebook likes. 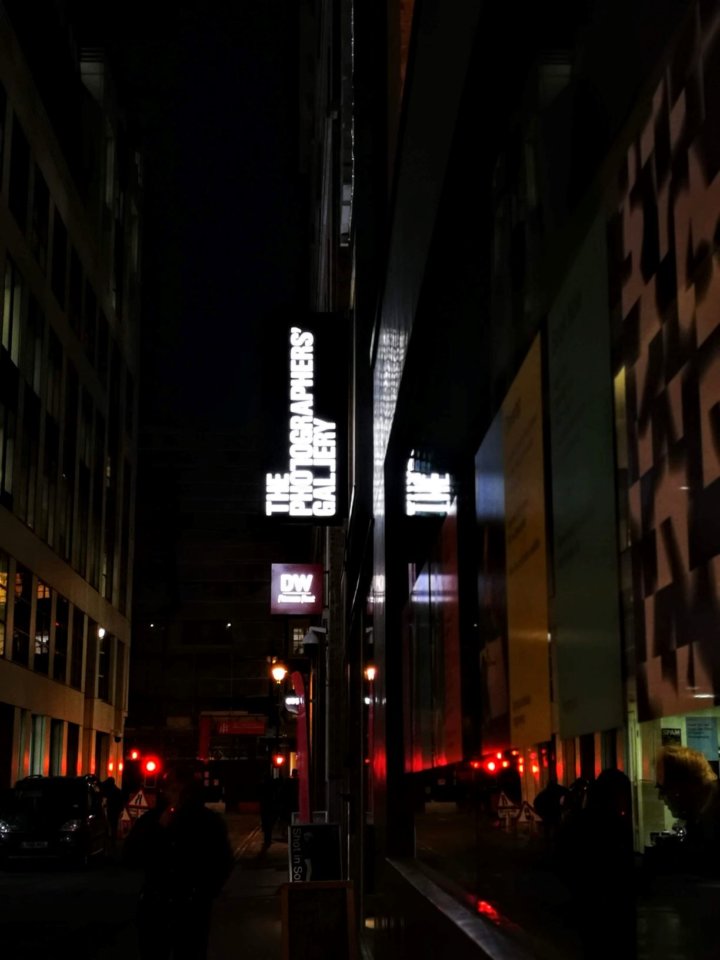 Feast for The Eyes – The Story of Food in Photography‘ is at the The Photographers Gallery  16 – 18 Ramillies Street, London, W1F 7LW until 9 February 2020 and is co-curated by Susan Bright and Denise Wolff . An Exhibition Day Pass is £5/£2.50 (concessions). The Photographer’s Gallery is free to enter from 5pm daily and there are free Thursday Lates from 5pm to 8pm.


You may also like our review of the V& A’s Food Bigger Than the Plate exhibition which ran until 20th October 2019.