Great British Menu (GBM) returned to our screens on 20th March 2019 for series 14. The BBC Two show puts the nation’s most talented chefs to the test. At Women in the Food Industry we are interviewing the strong female line-up of chefs from across Britain competing to serve their dish at the final banquet. Our co-founder, Mecca Ibrahim, interviewed Samira Effa, who was working for Alimentum, Cambridge when she took part in the show.

I started working for two weeks work experience in a local restaurant in Huddersfield where I’m originally from, then I got a part time job there and took a BTEC in catering. I had my first experience in a Michelin starred restaurant when I moved to Edinburgh and worked for Paul Kitching’s 21212.

What did you learn from that first experience of working at a Michelin starred restaurant?

Everything was so precise. It was so immaculate. It gave me a really good grounding for the chef I wanted to be when I got older.  Paul knew exactly what he wanted and had one of the biggest palates of any chef I know.

You worked at Alimentum before you had the role as Head Chef there? Tell us about that.

They approached me as they heard about my work at Alimentum.  I had a number of telephone interviews and then they filmed me in the kitchen at Alimentum, to kind of see how I would be on TV. I then heard that I was through and set about preparing my dishes for the show.

How did you prepare for the music theme at GBM?

I sat down with my partner and we listed a number of British song titles from British artists that we thought would make good dishes.

It was my seafood course. I knew what type of seafood I was best at cooking but I had to try to think of songs which would work for that particular dish. 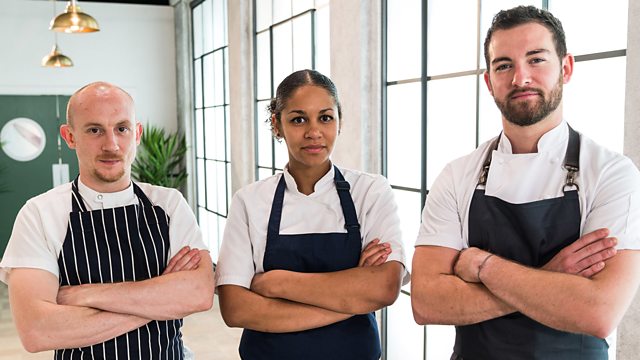 You’re competing against two male chefs for your region.  I assume you’ve always worked in kitchens where women are in the minority, is that true?

Yes definitely.  There’s only been one professional kitchen where I have worked in which had three women in it.

Guy Owen at The Idle Rocks

Curry, anything you with a bit of spice in it. I love anything spicy

Finally, what one piece of advice would you give to anyone who wanted to be in your position, working with Michelin starred-chefs, being a head chef yourself and now appearing on Great British Menu?

You’ve got to be ultra dedicated. Progressing in a professional kitchen means you often have to take great opportunities that come your way and that may mean travelling a lot and definitely working long hours, so you see much less of your friends and family than you may want to. The job can take up most of your life.  So you either have to acknowledge that and go for it, or not!

Samira will be appearing on Great British Menu from Wednesday 27th March representing the North East. If you think you have what it takes to be on TV in a food show, discover what TV producers are looking for in our feature – 7 things you always wanted to know about being on TV in the food world!