Luminary Bakery is a social enterprise founded to support women experiencing disadvantage by teaching them how to bake. Since 2014 Luminary Bakery has offered courses, work experience and paid employment within their cafes in London, empowering women to build their careers. Now the organisation has published its first cookery book – Rising Hope. A collection of over 70 delicious recipes each accompanied with heartwarming, joyful and inspiring story. Our co-founder Mecca Ibrahim caught up with co-authors Rachel Stonehouse and Kaila H. Johnson to discover more about the book. 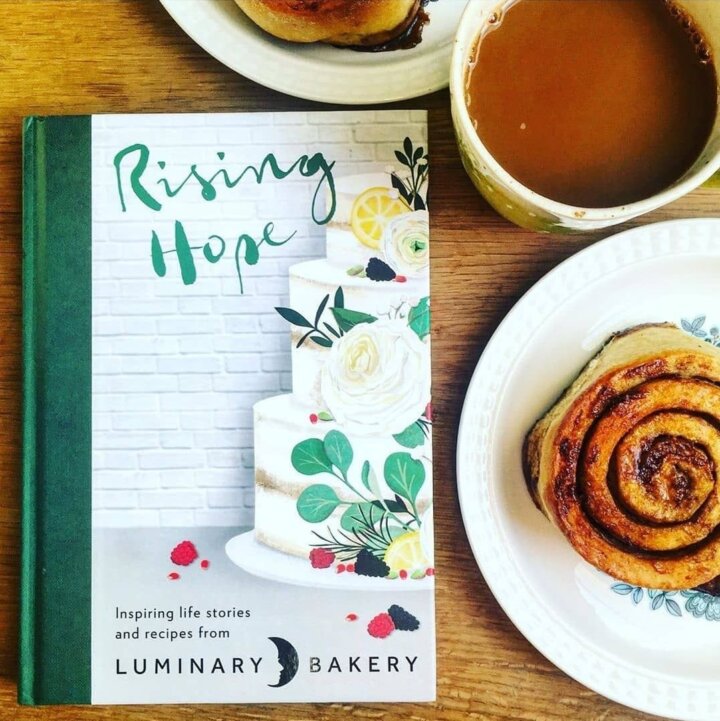 How did you both start working for Luminary Bakery?

Rachel: I started in the very early days of the bakery in 2014. I love baking and I was trying to work out how to use it in a way that wasn’t just for profit. I am really passionate about women’s issues and combating domestic violence too and I couldn’t find anyway of bringing those quite specific niche interests together. A friend of a friend introduced me to Alice who was founding Luminary as she was also wondering how baking could give opportunities to women and empower them.  I interned with them for a year and basically stayed on. I’ve grown with them ever since then.

Kaila: I met Alice through a mutual friend and she shared with me her dream of offering something to women who were experiencing extreme disadvantage. At the time I was helping an anti-trafficking charity, so my heart was already in that kind of sphere. I really wanted to help women who were experiencing something that was restricting them to feel empowerment. From that moment on, our lives intersected on a regular basis. I joined Luminary Bakery in the Communications role officially in 2018, but I had been working in the background since the start. 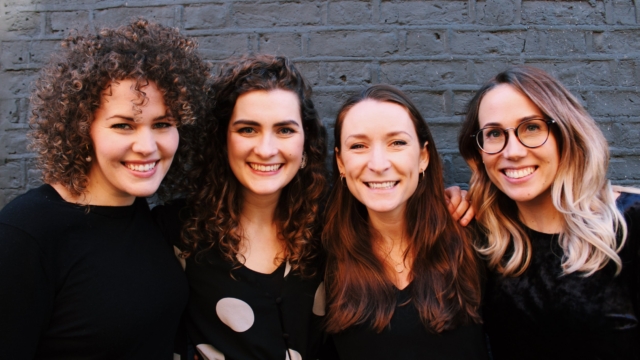 When did you feel you wanted to create a recipe book?  How long did it take to put together from concept, finding the right publisher and development to the finished product?

Rachel: It’s been about two years. We had been approached by quite a few people to do a cookbook, but it never really felt like the right time, there were always other things that felt more important. We then met a literary agent called Charlotte Seymour, who we instantly clicked with and she bought the cookbook idea back up into our agenda.  We wrote a proposal which she took to a number of London publishers including HQ who seemed the best fit. They have published a number of books about women’s issues, so they understood that as well as baking.

We have over 30 contributors to the book, so it took a while to develop. It wasn’t like one writer going on a retreat for a few months to finish a book. We wanted to call the women, email them, meet them and spend a while hearing their stories to create and craft the recipes and stories with them.

Kaila: We wanted it to be a community cookbook. Our contributors were involved all the way and they had to be really happy with the finished book. No matter what they had shared with me in our initial conversations, we gave them the opportunity to take out personal things they might later not want to share.  We had such a great team involved with editing and it was an exciting time bringing it all together.

Rising Hope is a fabulous title, did you come to this straight away or were other titles considered?

Kaila: Rising Hope was our very first tagline for the bakery.  Hope is something we want to give to our graduates, but we want to create a space where hope can rise.  In the bakery we say that hope is contagious. So it felt fitting to put on the front cover. Also there’s a bit of a pun in the title, rising hope and rising bread. 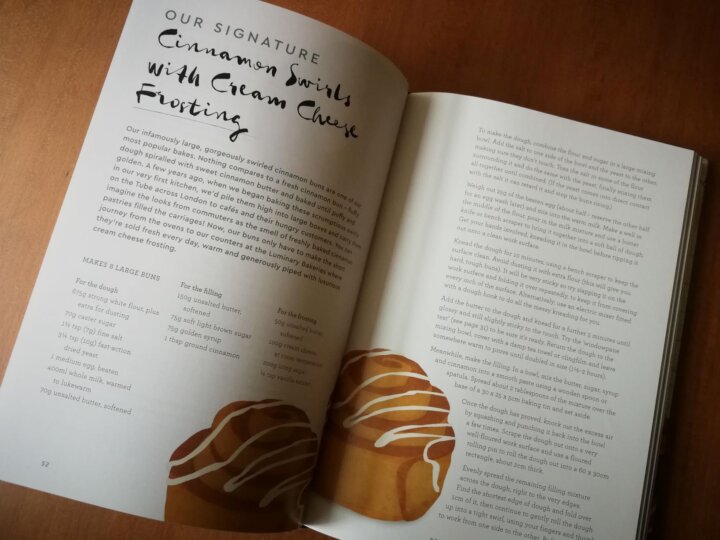 Are any of the recipes for goods that are on sale at Luminary Bakery?

Rachel: You can buy quite a few of them. The recipes are split into three categories, there are recipes from our graduates who have come through our programme. Also recipes that have come from women as bakers in our kitchens over the last six years, they make up the Luminary community and have done a lot of training for us. The third group are Luminary classics which you can buy from the bakery. We have had  Cinnamon Swirls from day one. I remember carrying huge tupperware boxes of them from our bakery on the train and delivering them to cafes around London. Also our cheese scones, our soda bread which we make on site and our vegan cherry coconut brownies. There’s also a wonderful Albanian flaky pastry –  Byrek – which is a big favourite at our cafes and is created by one of our graduates. 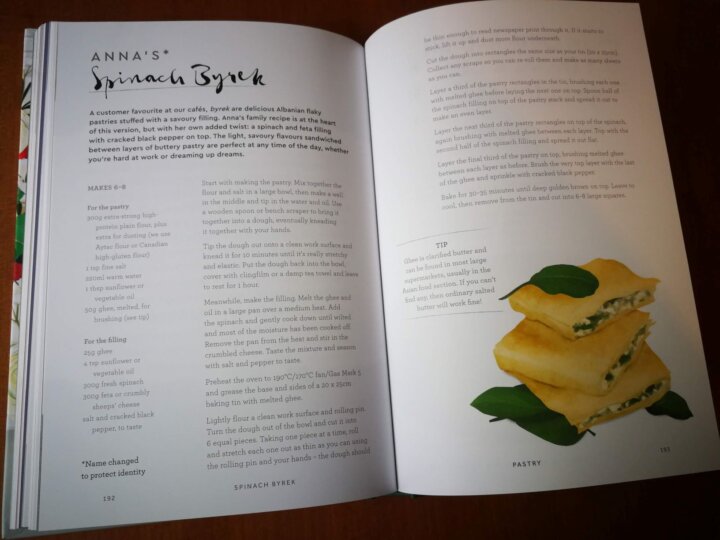 What are some of your favourite recipes and why?

Rachel:  It’s like choosing between your children! It’s really difficult as they are alll so personal especially as we know the people and stories behind them.  But if I had to pick, one would be the feta and spinach Byrek I have mentioned above made by Anna. It’s absolutely delicious. Another would be Monica’s almond butter and banana muffins. I remember being with her when she was testing them, they’re everything a banana muffin should be but a bit different because of the almond butter.

Kaila:  The carrot bread with nigella seeds is great as it literally glows and comes out looking like the sun. It’s great to have on the side with soup. For the launch of our book, I made our cauliflower cheese savoury muffins, which were a huge hit and are a staple for me. So filling and full of flavour.  It’s a great bake for mums.

The watercolour illustrations in the book are simple, yet evocative – why did you decide to use illustrations and how did you find the illustrator, Carrie May?

Rachel: There are more and more illustrated books at the moment. We like the illustrations as they hint more of what the bakes should look like. You won’t feel a failure if your bake doesn’t look like an illustration. We are all about making baking accessible and putting your own spin on things and we think illustrations lend themselves better to that. They are very beautiful illustrations and Carrie is very talented.

Kaila: Our publishers suggested illustrations as it brings you into the narrative and how you imagine the dishes may look. It’s like a story book and it encourages you to be your own creators.

What’s your favourite story in the book?

Kaila: I can’t really pick a favourite, but what I love about the women’s stories are the words used on how they overcame adversity and found hope. I wanted to give a quote which sums this up. It’s from Monica’s story on how she found a better life for herself and her child:

“Because of my past, I wasn’t able to believe in myself. Now, I’m with women who understand my background and who believe in me. The most important thing in life is strength. When you have it, no matter how many ups and downs you still fight – you see power. That’s what I see in Luminary – strength.” 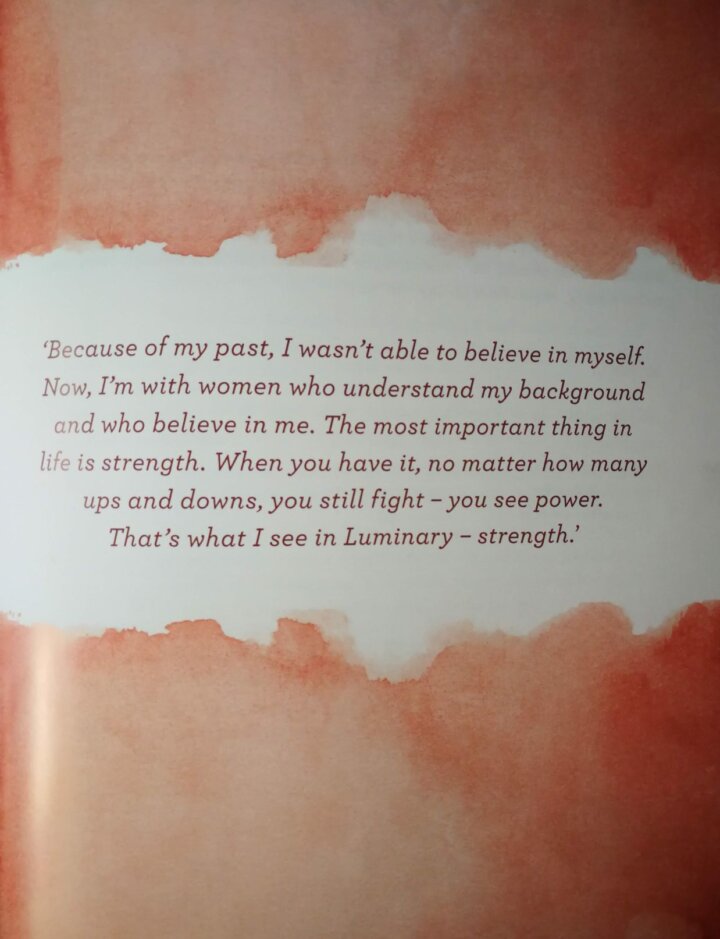 Which section of the book would you recommend for new bakers?

Rachel: The baking notes are really useful to read with the hints and tips, people often leave out the introductions as they want to get to the recipes. I then think for newcomers I would suggest traybakes and cookies and biscuits. On the baking course that we run and I teach we start with traybakes and then do cookies and biscuits. They are a really good leveller and give people a good level of skills which they can move on from. They are also quite hard to mess up. 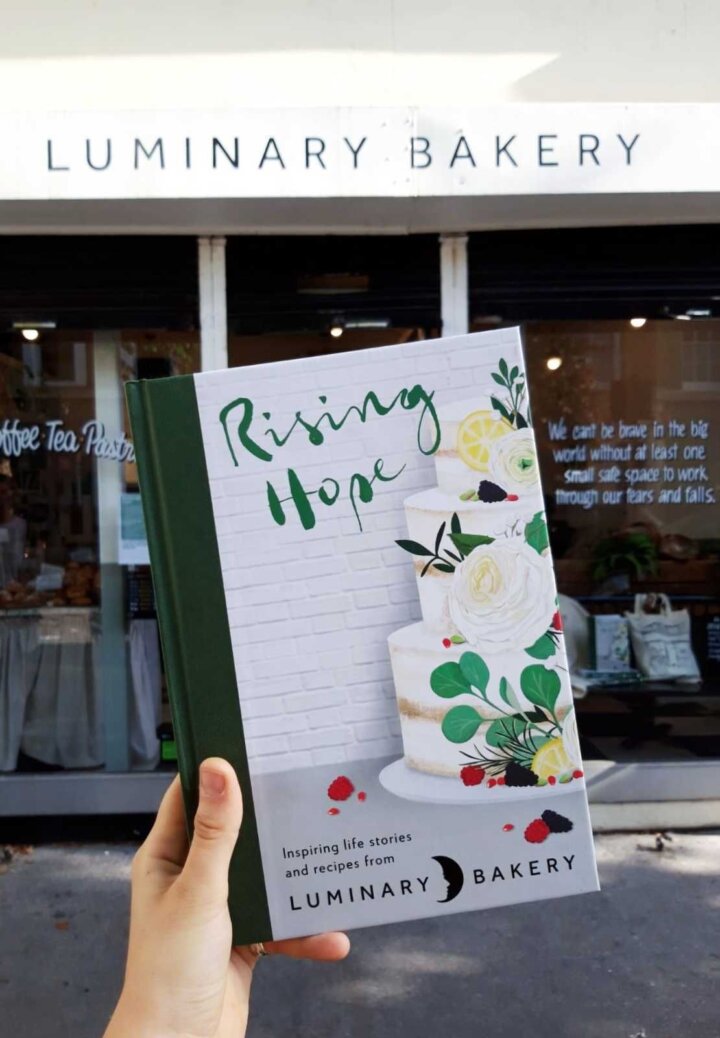 What is your dream for the book? What do you hope that people will get out of it?

Kaila: As we’ve said the book was two years in the making, so we had no idea of the importance of the timing. Rising Hope came out at such a significant time in our world when people were needing hope and that’s something that we really want people to feel. We want people to feel a connection which inspires hope. It would be great if the book could help others to reach out and not feel alone. Our dream is to help people feel inspired and build that community that we pride ourselves on in Luminary.

Rachel: We hope as well it will bring together people of all baking abilities. From newbies to people who are really advanced we hope they find new flavour combinations or things they’ve never heard before. The index is really helpful if you have different dietary requirements or you only have half and hour and you want to bake something, it’s easy to find. We want people to bake from the book and for it not to  sit on shelves gathering dust. We want it to be a living breathing book, and through the stories people feel a connection to the women whose recipes they belong to. 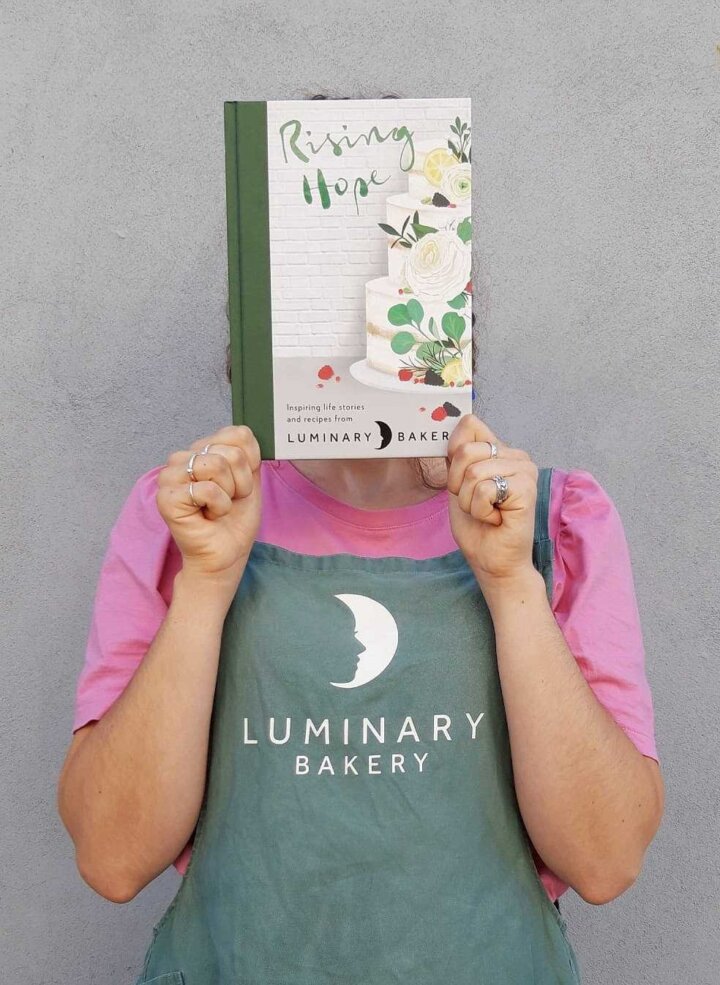 Rising Hope is published by HQ and is available to buy directly from Luminary Bakery in the UK. It’s also available internationally from Amazon, Barnes & Noble and other online booksellers here.