Great British Menu (GBM) returned to our screens in February 2022 for series 17. The BBC Two show puts the nation’s most talented chefs to the test. At Women in the Food Industry we are interviewing the strong female line-up of chefs from across Britain competing to serve their dish at the final banquet. To continue our series, our co-founder, Mecca Ibrahim, interviewed Liz Cottam chef owner of HOME on the banks of Leeds’ river Aire. 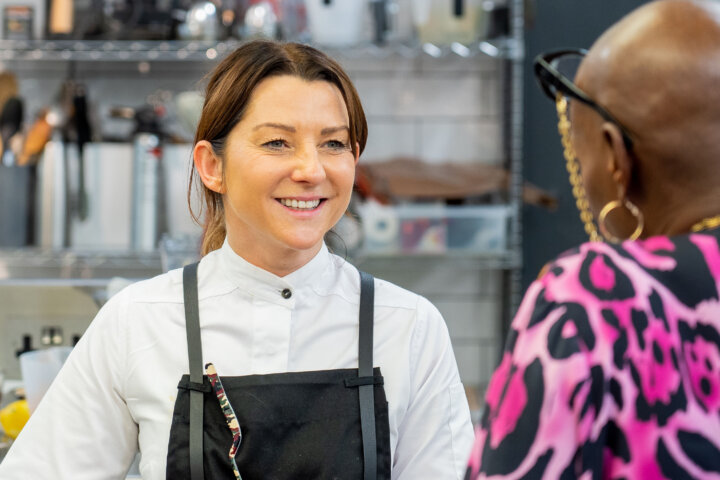 It’s a bit of an unusual pathway to where I am now. I worked in the corporate world for 20 years working for organisations that helped with quite large scale digital transformation projects. It was a really fulfilling well paid job, but I knew it wasn’t giving me the creative juice that I wanted. I knew that I wanted the second part of my life to be different and more enriching.

I did quite a crazy and typically me thing and resigned from my job, decided to pick up some small pieces of  consultancy work and throwing myself into the future. Before I got into the corporate world I went to art college, so I started painting and sketching and picking up my camera. I booked onto some photography workshops abroad and really fell in love with dramatic reportage and portraits. I managed to get an invitation to work in Berlin to work with a Magnum photographer for a short period.

I got all that booked, but my Mum was taken ill. Two years before, I got onto MasterChef the amateur version. I put together an application for the audition and was asked to go on the show, but with my corporate role, I felt I didn’t really have time for it. Although my Mum was really into me going for it and disappointed I didn’t do it. Then I got this “Time Hop” thing on Facebook, that said two years ago you were doing the MasterChef audition.  So I thought I was throwing myself into the future, cooking had become a passion, although I didn’t want to be a chef, but I did want to get closer to food. I was going to Berlin, so thought why not try MasterChef again, so I put the application through again.

That evening I got a call saying that my Mum had died. This was obviously really shocking. However, the next morning the production house at MasterChef called and said I had got through. My Mum’s funeral clashed with the Berlin trip, so that was off the table and I thought that MasterChef coming through was a sign.

I grabbed ingredients and got into the kitchen and cooked for 8 or 9 hours each day. It really helped me get through those really, really difficult first few months after my Mum had passed away.

Working on food showed me that I really enjoyed being in the moment. I was really stressed in the MasterChef studio and very conscious of the thought of lots of people watching this in the future.  But the minute I was put into a professional kitchen, I felt calm. There was this amazing camaraderie through a whole day of prepping. Then when we went into service, I loved it. I think I’m a pack animal and I felt like I was running with wolves. This was part of my clan.

Gregg Wallace said, “This is a transformation, I’ve never seen you so happy. Maybe this is sign”. I came out of the show really, really wanting to cook a lot. So I started doing some pop ups, hated that because I was on my own. I went round all of the restaurants that I had eaten out at and asked if I could  spend some time cooking with you. The most significant one that said yes was The Boxtree in Ilkley. I was really bricking it with the thought of working in a Michelin starred kitchen, I thought I was going to be drowning.  But in the end I found it really normal, the equipment was a bit freaky, but once you got your head around that, a recipe is a recipe.

I realised that I wanted to be in a restaurant environment, but thought I wouldn’t be able to start at the bottom at my age, with the time it would take to rise through the ranks.  I wondered if I could assemble my own team and do this for real on my own. Before I did that I found a disused restaurant in what used to be a glamorous hotel, with a very highly specced kitchen. I did a residency there for three months which taught me a hell of a lot. 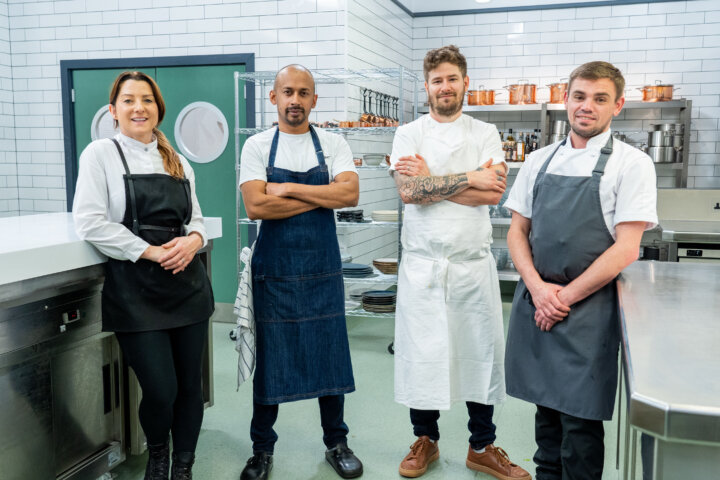 I got an instagram message from one of the producers. We got on well. I did a cookalong Zoom and was chatting about everything I have told you above and I was selected for the show. 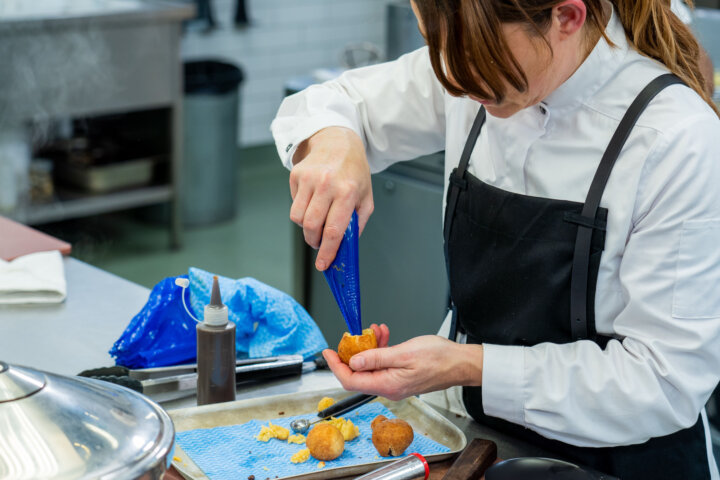 What did you think of the broadcasting theme at GBM?

It was the best brief that I could have thrown myself into. I think it naturally evokes so much nostalgia in us all as we think of all the TV that means something to us over the years It was a really interesting brief that allowed me to connect really personally with all of the dishes.

How did you find it working under the cameras, was it different to MasterChef?

I thought it was going to be different. It was a lot easier in some respects as you understand some of the structure of how these shows are made, which was a lot less daunting. But I think going into it as a professional rather than an amateur I put a lot more pressure on myself and quite rightly. It’s a great show and you really want to do your best. The consequences of messing up on such a large stage weighed greatly on my mind.  There’s a lot of similarities with the anxieties faced.

The dessert is the hardest to prepare for. When you get down to pastry there’s a hell of a lot of science and you have to rely on your equipment a lot. There’s lots of temperature control and time elapsing that you wouldn’t normally squash into the time you are given. To achieve the type of quality and impact I was looking for I was going to have to rely on some pieces of kit that I didn’t actually have in my own kitchen.

I thought I had to. I wish I had had more time to do it even more flamboyantly. It’s the cherry on top of being on the show, being able to go a bit wild with all the props is part of the joy of the show.

Which chef do you find most inspiring?

Grant Achatz over at Alinea and his kind of approach that “anything’s possible”. It’s an amazing mantra to believe in day to day, both in and out of the kitchen. I love the playfulness that comes through that framing. It allows me to really enjoy what I do in a super artistic way. His ethos is something I am really inspired by. 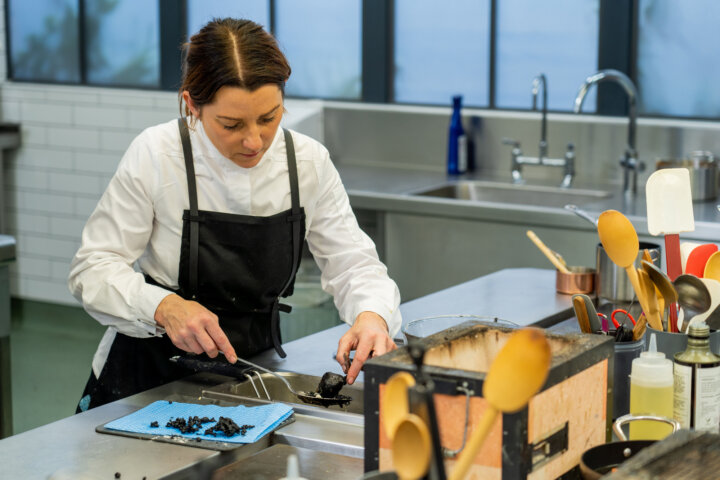 I am a massive sucker for Asian food. If you were able to give me a big vat of curry sauce and some fried rice, I wouldn’t need to worry at all. I’d be very happy.

Coming from that corporate background, it was a very male dominated industry. So coming into this industry I completely subconsciously I think I got results from being decisive, aggressive and single minded, so all of these fairly masculine qualities. We all know what it’s like in the majority of kitchens and it felt natural for me to continue in that vein. But a year in although we had done really well, as a new business, but I didn’t think we were growing at the rate that I wanted us to and I didn’t feel as creatively inspired as what I had hoped I would.

I ended up getting a life coach. She was assigned to me and I was a bit worried about a woman as I thought she’d be all fluffy and I wasn’t fluffy. But she has really helped me tor reframe the way that I lead. She’s helped to balance out my management and leadership style. When something’s 90% right, I was focussing on the 10% and dragging everyone who was doing this wonderful achievement of 90% into that 10%. I was stressed, I was fearful I wasn’t believing in the right things.  It was holding us back. So changing that around we have really strong culture and a really secure way of working as a team. We have hardly lost anyone now. So I would tell myself to believe in people more and allow myself to be more feminine.