Great British Menu (GBM) returned to our screens in February 2022 for series 17. The BBC Two show puts the nation’s most talented chefs to the test. At Women in the Food Industry we are interviewing the strong female line-up of chefs from across Britain competing to serve their dish at the final banquet. To continue our series, our co-founder, Mecca Ibrahim, interviewed Gemma Austin chef patron of A Peculiar Tea, in Belfast. 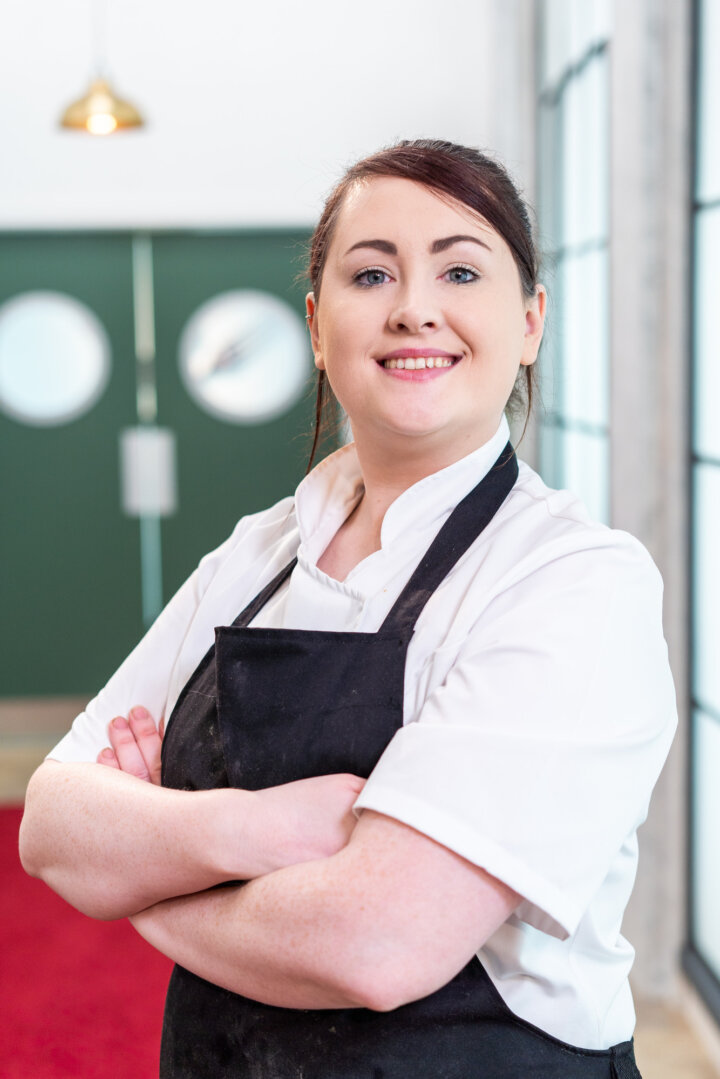 I started out in nursing actually and trained at university to become a nurse. I had a back injury and had to leave. Everything I had planned to do was falling apart. I was working in Tesco and had nowhere to go.  So I didn’t start cooking until I was 22, so have only been professionally cooking for 8 years.  A lot happened in a short of space. I fell into cooking by accident. I was out having lunch with my mum. I had always had an interest in food particularly baking. So my mum said why don’t you ask the chef if they have any jobs.  He said “Have you got any whites?” and I said “what are they?”.  The rest is history as I started working in the kitchen and fell in love with the job.

I am fully Northern Ireland trained. The two main roles I’ve had were at The Fitzwilliam Hotel a five star hotel in Belfast, I was pastry chef there. Then I was the sous chef in a two rosette restaurant called The Old Inn in Crawfordsburn. That’s where the bulk of my training took place. 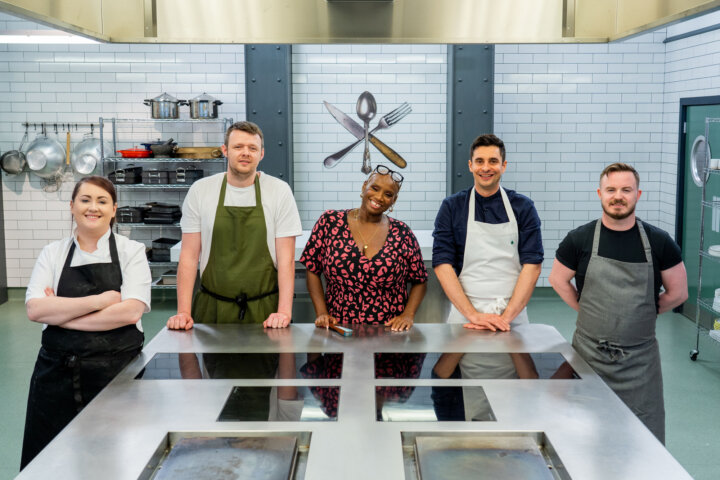 This is your second time on Great British Menu, how were you approached and how did you prepare for the broadcasting theme?

I must have made an impression last year as one of the producers got in touch and asked if I wanted to put my hat in the ring again. I was absolutely delighted to be asked – really thrilled.

I went down the route of what I enjoyed watching growing up.  Obviously the theme is specific to your region and I grew up in that generation of watching TV where you ate your dinner in front of it. So I wanted to use shows in the menu that I could relate to. I love themed food, so it was good fun putting the theme to the dish.

How did you find it working under the cameras was it different?

I actually thought it was harder this year. I’ve spoken to a couple of people who have done it twice and they agreed. You put a wee bit more pressure on yourself second time round,  as obviously you should know all of the do’s and don’ts, but trust me, it doesn’t work like that. When you initially arrive it’s very nerve wracking and when you see the cameras at the start it can be a bit overwhelming. But once you get cooking, you are just so focussed you forget they are there. 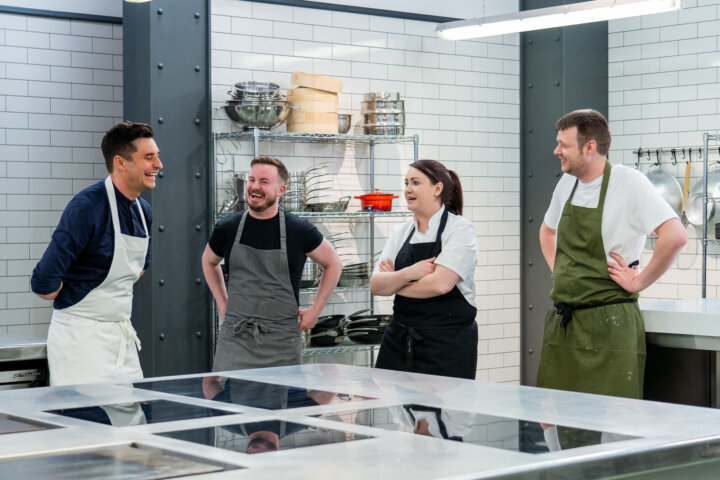 For me it would be the dessert. I was pastry trained. I always want to make sure that I really go all out for the dessert because I am so passionate about it. Daniel Clifford gave me a ten for my dessert last year so I wanted to make sure that I didn’t flop on it this year. I put a lot of time and effort into it this year and tried umpteen different recipes in preparation before deciding which one I wanted to go for.

Absolutely I love themed food. My restaurant is a themed one, so we theme our menu every eight weeks to something different. The props for me are all part of the theatre. I love being a bit childish, so I definitely embraced the props as much as I physically could. 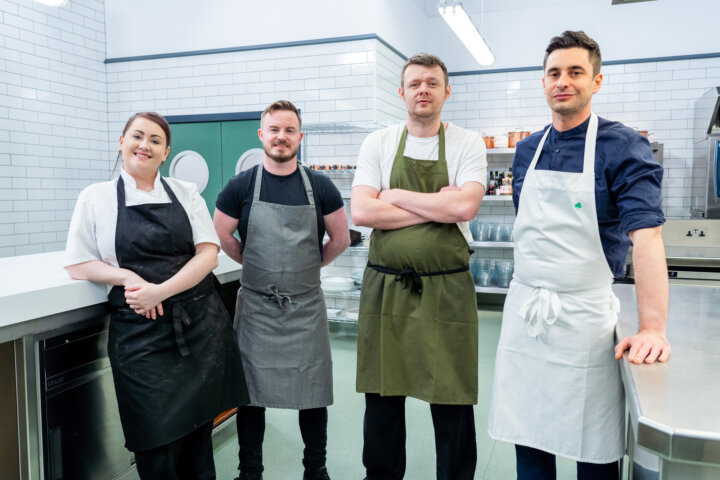 In terms of working with chefs, I’ve worked with some incredible ones in Northern Ireland.  My current head chef, the woman I have in front of my kitchen is a massive inspiration to me and we work so well together.

In terms of chefs that inspire me in general it would have to be Clare Smyth, she’s Northern Irish. She has three Michelin stars which is an incredible achievement for any chef but particularly a woman. For a lot of women, she’s what we would aspire to be. 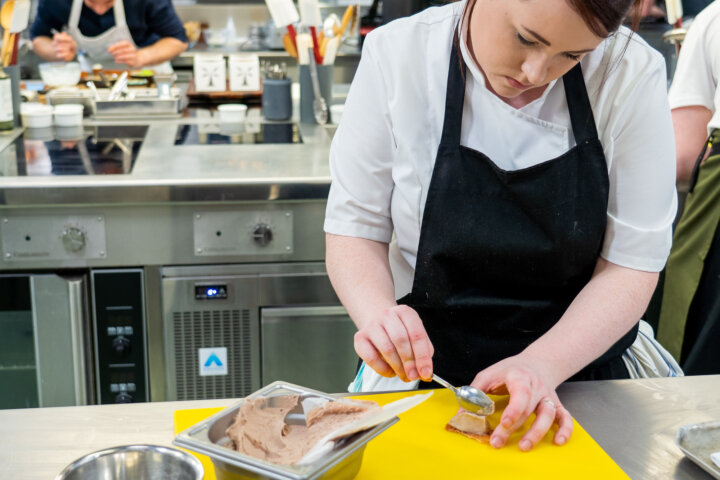 I love food, but for me it has to be a very Northern Irish crisp sandwich. Tayto cheese and onion crisps in white bread with loads of real butter, that would be my staple. With that you would make any Northern Ireland girl happy.

It would be to travel more. Because I only started cooking a wee bit later, and wasn’t 16 or 17 like many others.  I already had a house and responsibility here so couldn’t travel enough. I would have loved to have gone to different countries and learnt their cultures and food. Maybe have gone to a couple of  Michelin starred restaurants for a bit of background experience. Starting off that way definitely leads you on the right path.  That would be the advice I would give my younger self and anyone else starting out now.