Great British Menu (GBM) is now in series 14 and in brand new studios with a new format. The BBC Two show puts the nation’s most talented chefs to the test. At Women in the Food Industry we are interviewing the strong female line-up of chefs from across Britain competing to serve their dish at the final banquet. Our co-founder, Mecca Ibrahim, interviewed Cindy Challoner former Head Chef of The Classroom (now working at Hang Fire Smokehouse in Barry) who is representing Wales starting 1st May 2019 on the show.

This is your first time on Great British Menu, how did get onto the show?

I had a phone call from one of the producers which was a bit out of the blue. I obviously agreed as it was such a fantastic opportunity. I’ve never done a competition like this before in my life, and this is one of the biggest ones.

Could you tell us a little about your background and how you got into cheffing?

I’m from West Wales and I decided when I was 15 to go to catering college as I’ve always loved cooking. So thought why not do it as my trade. So I was at college for 4 years. Then when I was 20 I decided to move to Cardiff to get a job, as in my area there were just pubs. I haven’t looked back to be honest. I was a chef de partie at The Fig Tree in Penarth when I first moved down to Cardiff.  Then I went to The Thistle for another two and a half years. Saw a role advertised as sous chef at The Classroom and then worked my way up to becoming head chef there.

How did you prepare for GBM’s music theme and what approach do you take?

It was hard but it was one of those things you can do a lot with.  Music opens so many doors. I sat down and wrote ideas and I wanted them all to be close to my heart.  So I have Tom Jones The Green Green Grass of Home as my starter. I was bought up listening to The Spice Girls and they are the influence for my main course. Then it all flowed from there. I didn’t get that much time to practice as I was at work and I would practice a lot more if I was asked to go on again.  I went down the route of doing the songs first and then choosing the dishes to match, but I know quite a few of the chefs have done it the other way around. 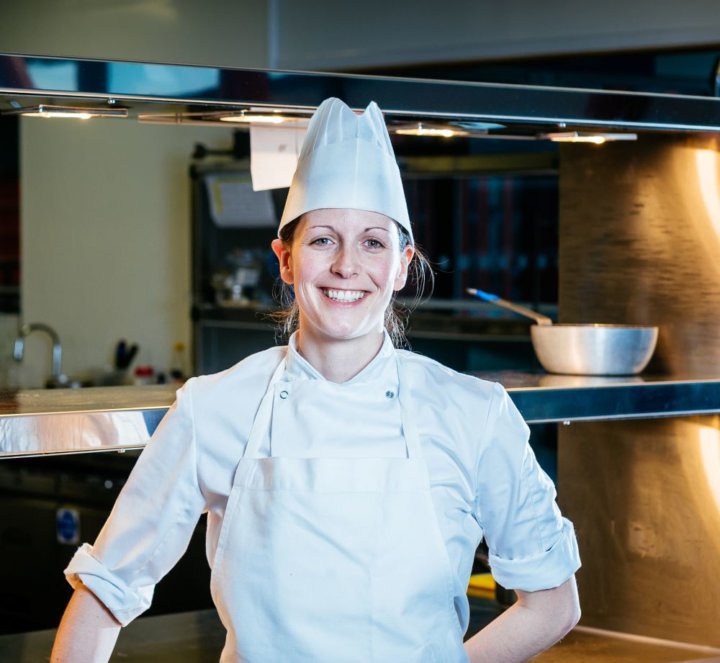 The main course was my strongest which was The Spice Girls inspired one and I’d say the dessert was my weakest.  I didn’t get the timings right on dessert and had least time to practice.  My dessert went out to inspire the students I worked with at The Classroom and was there to inspire everyone behind the scenes. But sadly I had a few equipment problems with my dessert, which you’ll see. 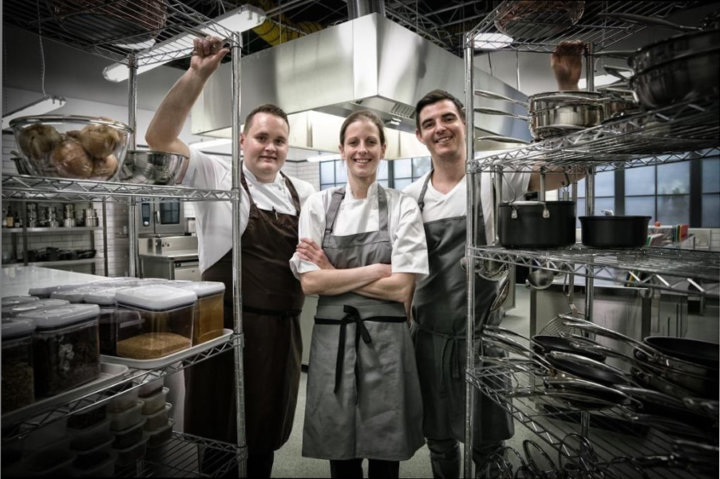 How did you find it working with Andy Sheridan who’s been on GBM before and Tom Westerland who was new to the show?

I know Tom, so it was nice walking into the kitchen and I thought “Thank God someone I know”.  Also two of us did The Green Green Grass of Home as our starter and they both featured lamb, so the producers were trying to get a bit of competition going between us. Who was going to have the better lamb? Who’d get the better dish? But we all just had a laugh and got on with it.

Did you use any the props on the show?

You will see some props for The Green Green Grass of Home as I wanted to make it look like a field. There’s also a music themed chopping board for my dessert. 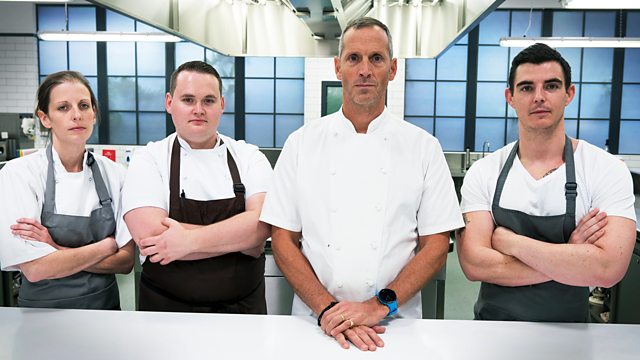 Your veteran judge is Phil Howard. How did you find him?

All of the judges have to be fairly brutal if I’m honest, and he came down hard on mistakes  but his feedback was good. As soon as he walked in, we were all “Oh my god”.  I think Andrew Sheridan who had been on before was asked who would you NOT like to have and he said Phil Howard.  So I hope they have captured his face when he walked in!

If you were marooned on a desert island, what one ingredient is a must have for you and  what one type of dish could you happily live on?

An ingredient would be salt so I could season everything with it.  My favourite dish type would be fish. I like to work a lot with cod.

All the head chefs when I was junior have inspired me to get where I am now.  But I really like Angela Hartnett, I think she is a brilliant chef and I was desperate to get her as judge, but it didn’t happen.

Finally, what one piece of advice would you give to anyone who wanted to be in your position, being a Head Chef and appearing on Great British Menu?

Cindy will be appearing on Great British Menu from Wednesday 1st May representing Wales. If you think you have what it takes to be on TV in a food show, discover what TV producers are looking for in our feature – 7 things you always wanted to know about being on TV in the food world!